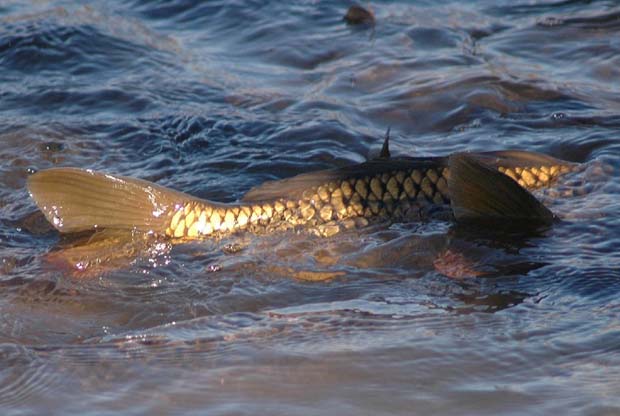 Feature Story: Start carping, they’re playing in water near you

[dropcap]O[/dropcap]ver the last several years interest in fishing for carp in the U. S. and Canada has soared. It has been popular in England and the rest of Europe for decades. More recently in England, Canada and the U. S., fly fishing for carp has taken hold in a big way.

The biggest jump in enthusiasm for the closest relative to a goldfish is that the fly has proven to be a seductive solicitor, surface or subsurface. Carp, like most fish, spend an inordinate amount of time foraging and seem to be perpetually hungry. Carp are not the selective feeders that some would have you believe. If it fits, they’ll commit. Too, they’re plentiful. That said, you can spook carpio very easily by sloshing around in the water or rushing about while ashore. With carp, take all things slowly.

There’s also some real don’t-dos in the carp-e diem game. Trout and saltwater flats game plans are out. Those ploys are like ‘prevent defense’ in football – almost a shoe-in you’ll lose the game you had won.

The common carp has been estimated to live up to 100 years in some environments/countries, but generally around 40 years is more acceptable. Essentially, and like tarpon, you could be fishing and catching the same fish for decades. Record carp landings have been reported in the 94- and 100-pound class, respectively in France and England. However, the International Game Fish Association (IGFA), official world record keeper and rule maker, records as follows. All Tackle at 75-pounds, 11-ounces, France in 1987; Line Class the same; Tippet Class at 16-pound test, 42-pounds, Italy in 2002.

An egg-lying adult female Cyprinus carpio can lay 300,000 eggs at one time and as many as 3,000,000 in a season, occurring when the water temp warms in the spring and water levels rise due to rains.

Carp inhabit lakes, ponds, lower sections of rivers – usually with moderately flowing or standing water, but are also known to be present in brackish-water estuaries, backwaters, and bays. They prefer soft, vegetative sediments; tolerating water temperatures above freezing (37 degrees) to about 95 degrees.

The bottom feeding profile is to grub around in the mud and filter out what is edible. The ‘rooting around’ has caused destruction to lake, pond and river bed aquatic fauna – a real problem for some regions of the world.

Like tarpon, the common carp can gulp air when in poorly oxygenated water.

Generally, they school in groups of three to five fish. Like everything in fly fishing, there’s his way, her way, their way, old way, new way, wrong way, right way and any old way. And then, of course, there’s actually the catching carp way.

While the maestro himself, Lefty Kreh, says that it’s hard to find a really bad fly rod these days. I still balk at cheap hardware and builds because even though that cheaper rod has a warrantee and casts as Lefty says, it’s unraveling while I’m in Belize is of no help to me.

I expect my fly rods to tolerate my carousing, skiff abuse, bumpy rides in the back of my dirt crusted SUV, roll happily around in puddle jumpers going to out-islands in the Bahamas, on float planes in Alaska, and the plain hard-ass-living that goes with time on the water.

I like all my fly rods to be from the same maker and same model so if I go from a 6-weight to a 9-weight I know what the action will be – no need to get used to it with a half dozen false casts and maybe lose the best opportunity of the day while I ‘adjust’.

What fly rod should you use for carp?

Well, that’s like asking an auto dealer how much does a car cost? You can always answer that question on your own. If the carp where your fishing have been caught regularly in the 10-pound and up range, you don’t want a 5-weight rod, but if they are in the +/- 3-pound range that ‘5’ would be fine.

Most carp lads and lasses I know that fish the Chattahoochee River (north of and south of Atlanta), and regional Georgia lakes and ponds are in the 8-weight pocket with spin offs going ‘9’ and ‘7’. I use a 6-weight because I don’t own a 7- and my ‘8’ is MIA due to a move.  With a ‘6’ I can switch out my leader and catch a bass or trout – yes, that’s doable on the Chattahoochee. Always a good drag system and large arbor. Don’t go cheapo on reels, and that doesn’t mean you need to spend big bucks either. A carpio can grab n’ go 60-feet of line in a nano second when it knows its been hooked, and it will run for deeper water and structure for cover. You’ll need a good reel to slow it down and turn it, and always use the ‘butt’ of the rod, not the tip to fight it.

I’m 100% predilected to floating line when carping, and always have 150-yards of 20-pound Dacron backing.

I only use knotless with a tippet strength of 8- to 12-pound test. My terminal knot is either a non-slip or a Davy. For leech-like, worm-like or streamer patterns I use a non-slip to best mimic natural ambulation, and a profile-less knot called the Davy for small flies (bugs and the like). When there’s a hatch happening or the water is busy with terrestrials – just match it and you’ll like the results.

Sometimes I’ll use all fluorocarbon and sometimes all mono. I never mix them. Clear water for fluoro and mono for turbid. Lengths: 9-feet for turbid and to 12-feet for clear.

If I’m dredge searching I’ll use weighted flies to achieve desired depth or find the bottom.

If benthic depth exceeds 5-feet I usually add a polyleader [comes with various inches-per-second (ips) sink rates]. The loop to loop connection to the fly line gets the leader/fly down paralleling the surface/bottom, not bellying in a “U” shape. Yup, you guessed it, a dog biscuit. Photo by Myles Quinlan, UK.

Some call it cheating. Some call it chumming. If surface fishing, yup, dog biscuits. Small, maybe 1/4-inch squarish size. Use them as chum. Throw a few and wait, throw a few again and wait. If you get takers, throw biscuits until there’s a little competition happening, then introduce a dark, deer hair fly trimmed out to match the biscuit size, roughly. I make them round-ish shape.

If you make an an errant cast to sighted fish, move it into the take zone slowly. Be patient, anything that’s fast or plops will spook a carp.

If you lay the fly down, softly, around 6- to 9-inches in front of a feeder or feeders (pick out the biggest as your target) you’re good for a take 80- to 90% of the time.

Also look for tailers in real shallow water. That feeding profile will be quite obvious. The ploy there is to let the weighted fly sink to the bottom. If you’ve managed this at about the same 6- to 9-inches in front of carpio, you should count on an eat, but don’t do diddle until you feel that faint tug.

Too, look for swirls and moving bubbles. The latter a result of gulping mud, sifting it for something to eat and then disgorging the residue. Bubbles can, in some cases, be sediment gases released both naturally and by the “mudding.” If they’re random I disregard.

If you see a surface take don’t try to set the hook immediately. Wait to feel a tug, then strike. Almost all attempts to set a take immediately end up with nada. A lesson well learned in the salt (tarpon and stripers for example).

Wait for the tug, then set using strip-strike, not the high sticking poster pose familiar to most fly anglers. Feed the line back onto the reel ASAP using, of course, your off-hand. This ORVIS sponsored book is written by Trout Magazine’s editor Kirk Deeter. His writing always a treat and, as usual, he knows what he’s talking about. From around $18 at Amazon. Put aside your preconceptions, read with an open mind, and you’ll soon be fly fishing for big, strong, smart fish in water just minutes from your home. From $56 at Amazon. The titled is absolutely correct. In a well organized presentation, Zimmerman tells readers what, why and how. About $24 at Amazon.