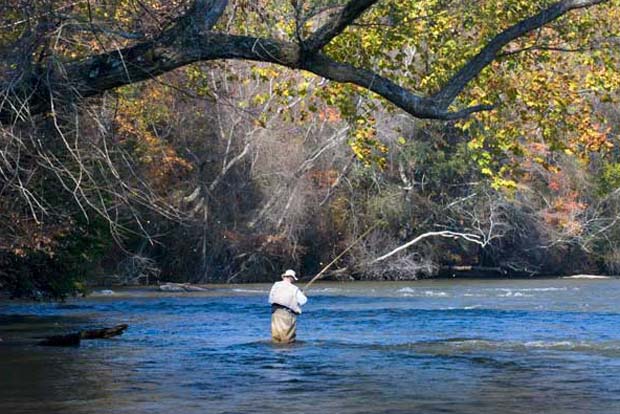 [dropcap]Y[/dropcap]ears ago, New Zealand’s angling legend Hughie McDowell, a transported Irishman, was my guide for most of a month on North Island. Aside from being a guide he was a world class competitive fly angler, masterful fly tyer, competent instructor and author. He taught me the nuances of fly fishing for trouts.

The teaching that both of these extremely experienced anglers employed without ever using the word, was STEALTH of approach

I was reminded of that word when fishing the Chattahoochee River in the foothills of Appalachian Mountians of Georgia on a hot evening this July. The trouts were wary. Rain had been scarce, tailwater dam releases hadn’t muddied the water, and it was low.

There were three anglers in view

Two guys were adorned as if preparing for an outdoor outfitters ad shot. They fished the far side from me and were wading. The third angler was a gal. She wore dungarees, a dark multi-pocketed long-sleeve shirt and a black felt cowboy hat accessorized with an uncountable number of flies. She fished from my side of the river from shore, when she could.

In the half hour or so of observing both success and failure, the purposefulness of STEALTH was recalled. The gal stayed low, in the shadows and advanced cat-like. She watched for up to a minute what each step brought into view. When sections obstructed her view she advanced from further back from the waters edge.

When she cast (never a false cast) it was never more than +/- 20-feet. Of maybe a dozen or so casts observed, before she disappeared around the bend, she landed four rainbow trouts and lost two unknown animals.

She had nothing on her person that shined. No lanyard with sparkling, clanging tools. No earrings, rings or watch. Not anything that would have easily distinguished her as a ‘shinny’ trout threat. She was able to get close and was unseen because of her STEALTH. She worked hard to catch fish. The lads, well they just looked good, doomed to just fish.

The water is a noisy place

Fish, because of the wide range of noise in their environment and the importance of sound to their survival, have developed unique systems for detecting sound.

Essentially, there are two effects. The first, called “particle displacement,” causes a back­-­and­-­forth motion of particles in the water. These sounds are in the near field, about 20- to 30-feet from the source – detected by a fish’s inner ear or by its lateral line.

The second is called “sound pressure.” A change in water pressure that resembles a sine-wave moving through the water. This “far field” effect is more important farther away from the source of the sound. Far­-­field sounds are detected by the fish’s inner ear and, if it has one, by its swim-bladder, which often works as an amplifier or resonator in combination with the inner ear.

A fish doesn’t have to see its prey or predator to know exactly where it is, its shape, size or whether prey or predator. A tarpon, for example, at 6-feet away on a pitch black night in muddy water can, with its hearing and lateral line, ‘touch’ its prey. ‘Touch’ as in if you felt something with your hand.

When you are fast wading a stream you are notifying fish of your presence. The same indicator warns and alarms fish by banging around on a boat deck or talking loudly.

A Fisherman’s Ocean by David Ross

Steve Kantner’s new book, Ultimate Guide to Fishing South Florida on Foot, is worth every word to a serious South Florida angler.