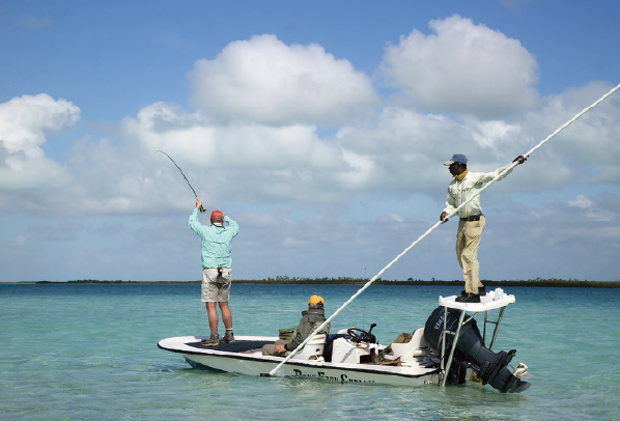 Feature Story: What to expect when bonefishing on Andros A good fish goes deep into the backing. Expect to divide your time between stalking bones via skiff and on foot where there is firm bottom. Pat Ford photo.

[dropcap]I[/dropcap]had long heard about the fabled 15-pound bonefish on the west side of Andros Island. And on early trips, I even spotted a few that may have been in that weight class. Hooking one was another story. On a later trip, while fishing with friend Pat Ehlers, guide Chris Leadon took us to an enormous white sand flat. We were simply blown away by the mosaic of colors as the light changed with each passing cloud. Blinding white turns to mint-green where flats fall into channels. As Chris poled us along, we spotted a lone, giant bonefish seemingly swimming through air, hundreds of yards away. Due to the multi-faceted nature of Andros flats fishing, it is advisable to carry crab and shrimp patterns in a
few sizes, weighted and unweighted. Pat Ford photo.

I had more than enough time to get ready on the bow, and checked my oversized tan Gotcha and coils of line. I took a deep breath, and when the fish was in range, made a pretty good first cast. So good in fact that the huge bone pounced on the fly as soon as I moved it. The first run was magnificent and luckily there wasn’t a thing within miles on that barren flat for the fish to foul the leader on. Eventually I got him under control but what I really wanted was photographs so I handed the rod to Pat while I got my camera ready.

Apparently that fish wasn’t as tired as I thought, and it took off again. Pat, an expert fly fisher and owner of The Fly Fishers Fly Shop in Milwaukee, managed to get the monster bone back to the boat just as I finished attaching a polarized filter to my lens. Chris slipped over the anchor so he could land the fish, which we all felt was around 12 pounds. Everyone was in position for some photos but Mr. Bonefish turned out to be camera shy, and made a dash under the boat. Naturally, it found the anchor line and popped my 12-pound tippet like it was sewing thread. All we could do was watch itswim off. Quiet enveloped the skiff.

A few hours later a front moved in, the wind shifted to the west and we were done. During the rest of the trip, we never even saw another fish anywhere close to that size. My intention is to never let Pat live that episode down. The Gotcha is an all-round producer. Pat Ford photo.

Andros is located about 150 miles from Florida, has a population of around 12,000 people and 900 square miles of flats teeming with bonefish. The island is cut in half by a series of bights that allow access to pristine, lightly fished flats on the uninhabited western shoreline. If you are a novice saltwater fly or lighttackle angler or just like to catch lots of fish, Andros has areas that provide large schools of small to medium bones less than 4-pounds that will eagerly eat a fly. But if your goal is a trophy bone over 10 pounds then you should make an effort to fish the so-called Land of the Giants on the island’s west shore. Bonefish of this size are most common on the west shoreline, and on some flats close to the Club. Pat Ford photo.

My ventures to Andros have been to the legendary Andros Island Bonefish Club, founded by Capt. Rupert Leadon 26 years ago. Located on Cargill Creek, it covers 20 acres of land on the east side of the island, just north of Middle Bight. It’s a “no frills,” reasonably priced operation that provides clean air-conditioned rooms, outstanding Bahamian cuisine and most importantly, access to the Land of the Giants.

A typical day begins with a made-to-order breakfast, a sandwich bar where you can make your own lunch, followedby a 7:30 a.m. pickup by your guide. If you want numbers of 3- to 5-pound bones, you may never leave Middle Bight. There are plenty of trophy fish on the east side and in the bights, so you’ll still get your shots. For that double-digit bone, you want to make the 40 minute run to the west side, if conditions permit. Unlike a lot of places, when you get your fly in front of that bone of a lifetime, it’s probably going to eat. The flats along the east side are very productive during the summer months due to the influx of cool ocean water, but thebig schools of fish move in around October when water temperatures begin to drop. November through April is prime time for not only numbers of fish but also for the west side monsters. When I asked Rupert when would be the best time to visit his lodge, he laughingly replied, “When the wind’s not blowing!” Actually that’s pretty good advise because windy cold fronts can make fishing difficult, even though there are plenty of fish on the leeward sides of the small islands. What’s even more of a problem is a sudden drop in temperature, which can chase the bonefish off the flats for a day or so, but as soon as it warms up they’ll be back. A west wind will all but eliminate fishing the west side, but that doesn’t happen very often. An 8- or 9-weight rod and a quality weight-forward floating line will handle any bonefish, but during the cooler months, huge barracuda appear on the flats so its wise to have a 10-weight rigged with a ‘cuda fly and a short trace of wire leader. Barracuda are an incredibly exciting fish to catch on the flats. During one of my trips, Tom Andersen caught one that was over 40-pounds. It’s not unusual to see tarpon in the 30- to 75-pound range or permit so a 10-weight can come in handy. I prefer a 12-foot leader on the flats, tapered to 15- or 12-pound fluorocarbon tippet. Andros bones usually aren’t leader-shy so fish whatever leader you feel comfortable with. The go-to fly is a Gotcha. Everything seems to eat it, so all you have to do is vary the sizes. The bigger bonefish like bigger food and you should have some with both lead and bead-chain eyes because you can be fishing in anywhere from 6-inches to 3-feet of water. For the most part, tan and pink are the best colors but most standard bonefish flies were developed in the Bahamas so most work just fine if you make good presentations.

If you take time to check out the coral heads in the channels, you’ll find them loaded with snapper. A few minutes on the coral heads on the way home is a nice change of pace and a great way to dredge up dinner. A lot of fishing in the Bahamas is done wading, which is my favorite way to stalk bonefish. You’ll need a good pair of “flats sneakers” to be comfortable. Trying to wade in sandals or similar attire takes a lot of the fun out of it. It’s surprising how close you can get to a tailing bonefish when you’re on foot. You will see wakes and fins long before you can see the whole fish. Since you’ll probably be in pretty shinny water, you need to drop the fly ahead of the fish and wait till it swims up to it. When the bone is a few feet from the fly, a slow, steady retrieve will usually generate a strike. It’s all very up close and personal!

Another bone falls to a bead-chain Gotcha. Pat Ford Photo.

I’ve been to Andros a half-dozen times over the last 10 years and I usually start planning my next trip  on the plane ride home. That has a lot to do with the fact that I still haven’t caught that “home run” bonefish, and, because Rupert Leadon makes the best conch fritters on the planet. Numerous airlines now service Andros Island.