Feature: The little engine that did. East Cape Canoe LLC 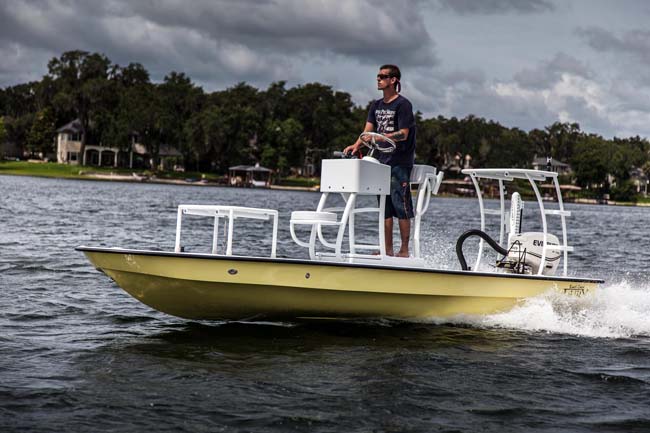 The Fury, an amalgam of the Lostman, Caimen and Vantage 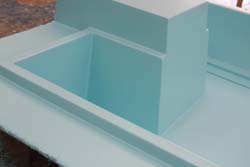 The first step in the boat building process, a mold that just got sprayed with gel coat.

[dropcap]M[/dropcap]uch of the information about modern, technical flats boats has been provided by self-promoting boat builders and then presented to the boating community as factual truth by well-intentioned, but eager-to-please dealers, ad agencies and misinformed magazine editors. While some design claims may add up to good marketing strategies, eventually the truth reveals itself during real life shallow water fishing situations.

Marketing is essential for these builders and in the case of distribution there are basically two strategies; sell direct to the end user but don’t provide all the add-ons so that the consumer has to look elsewhere for modifications or sell direct to the consumer and do everything in the way of modifications in-house (only a few do that), or sell the base boat through a distribution network and entrust the “dealer” to provide the extras or add-ons, which they all essentially farm out. There are, of course, exceptions.

There is a long list of flats boat builders and the most and best are Florida based: Beavertail, Dusky, Dragonfly, East Cape Canoe, Dolphin, Panga, Maverick and Hewes, Hells Bay, Islamorada 18, Action Craft, Mitzi, Gheenoe and more. Not too many of these builders are swamped with orders for new boats or modifications to sold boats except for Gheenoe, which is always busy and in a class by itself, but one of them, not in that Gheenoe class, is swamped and it’s East Cape Canoe, LLC in Orlando, Florida. And there’s a good reason why they’re in the heavyweight division. 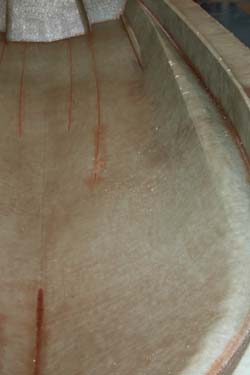 The second step, a light veil of fiberglass, called the skin, is applied to the hull.

I was there at East Cape in Orlando, Florida six weeks ago. They’re swamped. Fourteen or more weeks out, and they’re not losing orders. After watching their operation in action for almost a full day it was easy to see why they’re so busy: Owners’ enthusiasm, knowledge, hands-on practice, no frill offices (really funny), worker productivity, product design, pricing, fit and finish, number of models and options, and almost everything is done in house with the obvious exceptions.

Serendipitously, I was introduced to two East Cape boat owners while in the plant, one had stopped in to observe progress on his Vantage, which was in the final stages of rigging, and the other a client checking on some modifications to his Caimen. Both customers said they’d been skiff owners for more than 20 years and that their relationship with East Cape was far more satisfying then they’d ever had with previous builders, and that it had little to do with price point. Independently, they agreed they’d recommend an East Cape built product any day of the week.

East Cape is in a small industrial park in Orlando and they operate out of a 20,000 square foot plant with about 10,000 square feet of yard space and an additional 6,000 square feet of combination garage/storage space with offices. Collectively, the 36,000 +/- square feet held far more flats boats on it than I’ve ever seen at any Ft. Lauderdale or Miami International Boat Show.

In the yard, there were a few dozen sold boats waiting for pick up, add-ons, change-outs or fixes because of damage and one for a warranty issue. Inside the plant, every model  skiff it makes, with the exception on a Gladsesman (the Glasdesman is a modified or hybrid canoe and first East Cape model), was in one stage or another of build or finishing. Remarkable. The skiffs I observed, both inside and outside the plant, were Caimens, Lostmans, Vantages and the newest entry Fury – a slick amalgam of the Caimen, Vantage and Lostsman.

The plant was orderly and exceptionally clean – no trash anywhere on the floor. It was every persons job to keep it that way – including the owners and I even found myself pitching in. Pandemic, I guess? 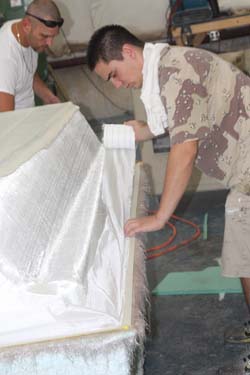 Employees prepping a part for infusion.

Kevin Fenn, the creator of East Cape Canoe is a personality that fits the profile of the perfect entrepreneur as described in a Forbes Magazine article I read not too many years ago. In summary; smart, honest, indefatigable, highly motivated, focused, not arrogant but inclusive and creative.

NOTE: Some years ago, when I was the Editor-in Chief of a weekly fishing and boating magazine, a publication owned by Dominion Enterprises, I began serious discussions with Kevin about buying a Galdesman. I told him about my boating experience, what I expected out of a Gladesman, my age and where I intended to use the boat. Shocked, he said: “Skip, the Gladesman isn’t the boat you should buy, it’s not for you and what you expect out of it – you’d be dissatisfied. I won’t sell you one.” To this day, I still thank him each time I see him because he was right and he always gets a chuckle out of my retelling the story.

Marc Page, his partner and high school classmate is also cut from that same cloth. They’re not interested in accoutrements like nice offices with drapes and oriental rugs. They share a linoleum floor office no bigger than a dressing closet – enough room for one chair, one Apple lap top computer that sits on an ancient gray metal desk. Each are on their cell phones all day long and spend very little time in “the” office. There’s no coffee machine, vending machine, refrigerator, microwave and no lunch room. Marc’s daughter and Graham Morton share an office that’s massive – at least the size of two closets, but they each had high capability computers.

NOTE: Graham is responsible for PR and print media as well as his own video production company. He also worked in the plant for sometime and is completely familiar with how things work at East Cape – from injection molding to console rigging. Graham works his own hours. Many of you know Graham for his award winning fly fishing films – go to www.waterlinemedia.tv/ 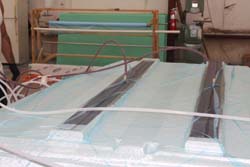 The liner beginning infusion. The white material is dry glass and structural core, and the red material is the infusion resin.

Both Marc or Kevin are almost always on the plant floor. These guys are totally hands on. No one grouses at anything Kevin or Marc want done, redone or fixed because everyone knows they now how to do everything – better and faster. Kevin and Marc, like movie directors, move from one station to the next all day long and do it with infectious enthusiasm. East Cape has only had to fire two employees along the way, one a classmate of Kevin and Marc’s who couldn’t leave drugs alone and another for constantly missing work. The dozen or more plant specialists are always busy, know what they’re doing and can explain the process they’re involved in with pride and confidence. As a former owner of a manufacturing operation, something like that stands out as exceptional.

When Kevin and Marc hire folks they prefer to hire people who haven’t been involved in boat building – especially skiffs and bay boats. They say it’s easier to train a tradesman the way they want things done rather than re-teach someone who may have bad habits or insists on doing things “their” way.

In the hours I was there,  I saw a Fury go from nothing to injection molded – then watched it wait for the 24 hour layover while curing took place. In the winter that 24 hour cure can stretch to several days. The Fury would probably be finished the next day or so (I didn’t inquire about add-ons so it may have been a few more days). Then, a complete inspection and then a trial run with the customer a day or so later if, of course, there were no hitches or customer changes. No skiff is finished until either Marc or Kevin give it a colonoscopy and an EKG running test. 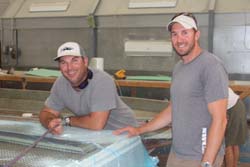 There was one remarkable thing about the plant – you couldn’t smell even a hint of chemicals, nada. However, when the paint booth is in operation and the doors are opened post paint completion, there is a slight paint odor that lasts maybe 10-seconds if you’re near the booth. It’s caused by the air pressure differential in the plant versus the booth itself. There’s a massive air cleaning – handling system above the booth so that during operation you can’t smell anything. The spray paint experts are dressed head to toe in spaceman suits with full fresh air masks. The paint booth is completely cleaned to spanking brand new on a regular cycle.

East Cape sells direct to the consumer so there’s no dealer mark-up or after-market add-ons by third parties. East Cape builds all the options in-house (console, poling platform, casting platform, operating bait well, etc). The exceptions, of course, the trailer, electronics, trim tabs and motor, but they mount and wire up everything. When you pick up an East Cape or have it delivered – it’s fish o’clock time.

East Cape went from building it’s hybrid canoe, the Gladesman, in Kevin’s garage with his buddy Marc who helped payless everyday. Kevin finally said to Marc: “This is ridiculous, why don’t we just become partners.” They became partners and were the little guys on the block that are now one of the oldest, largest and most successful skiff builders in Florida; the epicenter for flats boat technology. As original owners, they’re older than Hells Bay Boats, Beavertail and have out lived a few others that have perished or been sold and resold to new owners. 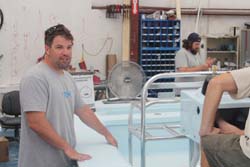 Graham Morton was my guide for most of the day, but Kevin made it clear at the outset that I could photograph everything but a canvas covered shell (it had its own station). I couldn’t get Graham to even give me a hint of what was under that canvas. 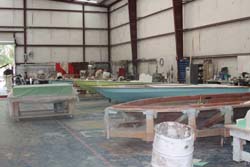 About 25% of the main East Cape plant.

Plans for a bay boat are underway and probably will be out in late 2013. 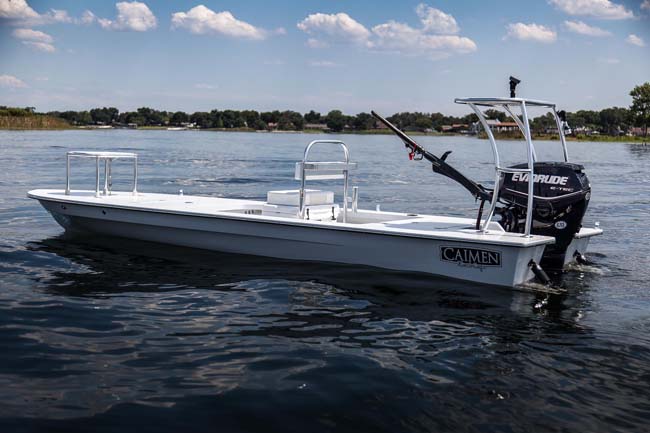