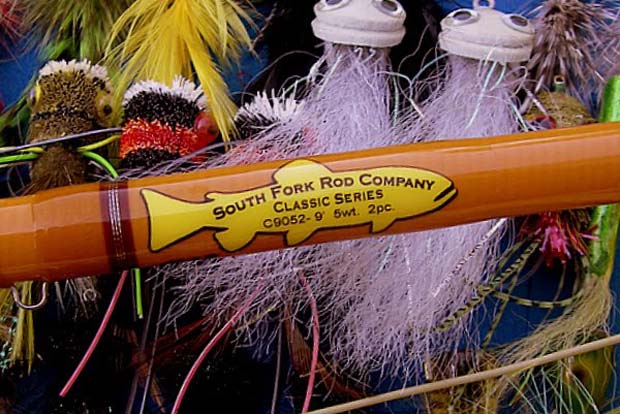 Feature: What’s all this fuss about fiberglass this time?

Fiberglass fly rods, this time around

[dropcap]F[/dropcap]iberglass fly rods were reaching their technological limits – longer and lighter in the late 1970s, and then kaboom. The industry moved en masse to graphite fly rods. Graphite being inherently lighter and very strong, but the earliest versions were somewhat buttery and not at all similar to today’s stiffer versions of high modulus graphite fly rods.

Now, we’ve circled back to glass, and in a big way

SIDEBAR: Fiberglass’ origin of popularity was WWII (E-glass – electrical). It was used as a communications antennae and found on every ship, communications hub and Willys Jeep. It was indestructible and cheap.

Fiberglass was introduced to the fishing community in the late 1940s and rapidily replaced bamboo. Glass had a casting feel similar to bamboo (slow to load, then DT line), was easier to work with and to mass produce, almost indestructible (e-glass) and it was cheap.

But for anyone who wanted a meatier rod, it wasn’t available. Glass was then only available in lower weight classified rods. No one, by the way, really even thought of fly fishing for saltwater game fish. A 12-weight classified glass rod in E-glass would be similar to casting a flag pole.

SIDEBAR: One of the first companies to embrace fiberglass fly rods was Shakespeare and their spokesman was Boston Red Sox’s phenom Ted Williams, an off season resident of the Florida Keys and an accomplished fly angler.

What’s so good about fiberglass now? A fast-action graphite requires YOU do the work to get those laser sharp loops and long distance casts. Some folks find glass’ slow loading of the flyline and letting the fly rod do more than half the work an enjoyable thing. And no, the loops are not as tight as they are with graphite and punching through wind is also more difficult, and sometimes impossible with glass.

With a stiff graphite rod a hooked head shaking fish, and you never know when that’s coming, can break you off. A fiberglass rod bends well into it’s length – acting as a shock absorber on violent head shakes. Less lost fish is a good thing.

The backcast is the backbone of good casting

Fiberglass fly rods will advance newbies beyond that beginner stage faster than with graphite. Feeling the line more slowly load a fiberglass rod translates to a faster learning curve. It’s all about timing.

Who is in the game?

A few of the big names have already started pricing their glass rods at near graphite levels. Most, though, have stayed reasonable and many smaller outfits make superior rods that are very favorably priced. Pricing has a lot to do with fit & finish, hardware and whether the builder owns mandrels or buys blanks.

Some of the big boys have a toe or two in the water as well. For example, Scott, Lamiglas, Orvis, Echo, Thomas & Thomas, Tom Morgan, Redington, and TFO.

Noticeably, there’s a missing element in fiberglass rod builds, and it’s universally in the generally determined to be saltwater weights, seven and up.

“Compared to graphite, the higher weight single handed rods in S-fiberglass would sacrifice casting distance, but more importantly make it very difficult to punch through any wind. Too, fiberglass’ big fish fighting capabilities would also be problematical compared to graphite.” He added. “We make both spey and switch rods in S-glass with the longer spey rod outcasting the shorter switch rod, but the spey is not as good in-close as a grahite made of the same weight.”

What is a fiberglass fly rod’s DNA flaw?

Some say you can’t get the same distance out of glass as you can out of graphite. True, mostly. And here’s why:

Fiberglass accepts a load, uniformly, up to a certain point. It may continue to bend, but the resistance to bending drops off dramatically at its terminal end. With a rod designed for short to medium distance, you can easily reach those distances. When you try to cast farther a fiberglass fly rod stops accepting the increased load, and it becomes more difficult to cast longer distances.

Rod designers Margot and Dave Redington tell us that better distance performance can be designed into higher fly weight rods using S-glass because it has a tighter or high modulus than E-glass. Dave said:

“S-glass is more brittle and not as crush resistant as E-glass. Unless an angler liked the slow loading characteristics of fiberglass when casting and the sensitivity of it when a fish is on, a graphite rods performance might be preferable in weights above a six. Most fly anglers never experienced a glass rod because they were only weened only on graphite.” The Redington’s only use E-glass because of its durability, and build only in the lower weights. “We have maybe produced a dozen or so of the heavier weight S-fiberglass rods in 35 years of business. We have the mandrels for everything we sell, but there just isn’t any interest.”

It looks like those that fish the salt should probably stick with their graphite rods. However, if a slow loading rod is desirable to you, buy a lower rated modulus rod or just overline it by one or two line weights.