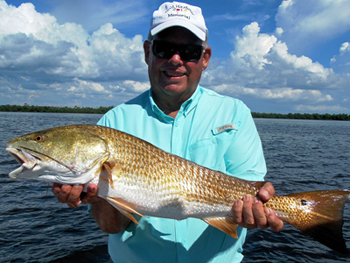 Fishing Report: Fishing the heat of August around the islands

By Capt. BILL RUSSELL – On the Water, Pine Island Eagle

[dropcap]A[/dropcap]s we roll into the month of August, you can truly feel the dog days of summer in Southwest Florida. You can count on just about every day being hot and sticky. This is a quiet month for anglers but there are good fishing possibilities on the water.

Two of the best fish to target are redfish and mangrove snapper, neither seem to mind the heat to much. In fact, fishing for both should improve as the month progresses. Look for snapper around structure including bridges, piers, docks, rock ledges and under the mangrove shorelines. Areas with a good tide flow will hold larger fish. All of the gulf passes are also great snapper grounds.

The best time to hunt for redfish is early in the morning on the shallow flats while the water is the coolest, then under the shade of the mangroves on the higher tides. Cut bait often out-fishes live bait for reds this month. Toward the end of the month the larger fish will begin to bunch up in their fall schools. It’s common to locate several hundred in a pack pushing down a bar edge on the rising tide. Schools will also show up inside the gulf passes on the falling tide.

As in the past months there are plenty of fish to give steady action over the deeper grass flats. The incoming tide is usually the best time to catch a variety, including trout, mackerel, ladyfish, bluefish and small sharks in depths averaging 5- to 10-feet. It’s also a month where tarpon can show up anywhere; don’t be surprised if a huge tarpon slams a small trout bait. [read more]