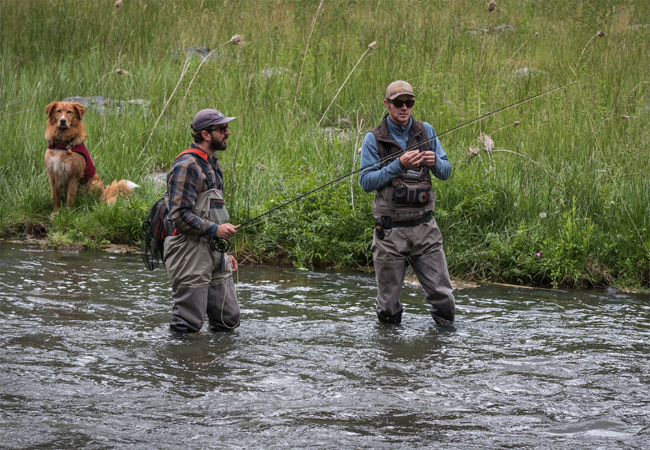 You might be tick protected, but what about Fido? Fly fishing on the Crooked Wild and Scenic River, near the Big Bend, Oregon Campground, June 11, 2017, by Greg Shine, BLM – a commons image.

[dropcap]T[/dropcap]hink you live in a place that’s free from disease-carrying ticks? Don’t be so sure.

Citizen scientists found ticks capable of transmitting Lyme disease and other tick-borne illnesses in dozens of places across the United States where the pests had never previously been recorded, a new study reports.

All told, disease-carrying ticks were detected in 83 counties where they’d never been found before across 24 states

“People should be aware of ticks and tick-borne disease, even when they may think there’s not a recorded incidence of a tick in a county,” Nieto said. “These things, they’re not obeying borders. They’re going by biology. If they get moved there by a deer or bird or people or pets, they’re going to establish themselves and start growing.”

A tick doesn’t need to acquire an infection from a blood meal. It’s born with the infection.”

The massive nationwide study also provides evidence that ticks are born carrying infectious diseases, rather than picking germs up from the animals upon which they feed, said Wendy Adams, research grant director for the Bay Area Lyme Foundation, in California. The Bay Area Lyme Foundation suggests that people protect themselves from ticks by:

• Do regular tick checks after being in a tick-infested area, and shower immediately after to wash away ticks that might be crawling on you.

• Consider using tick repellents like DEET for skin and permethrin for clothing.

• Talk with your doctor if you develop any symptoms following a tick bite.

The new study was published online July 12 in the journal PLOS One.