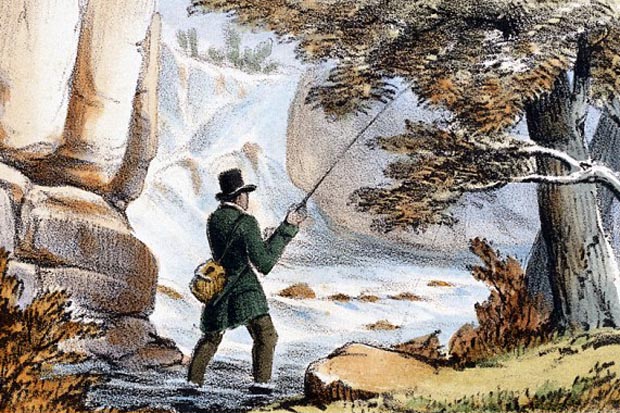 Fly Fishing: It was a nice summer day in 1450, and the carp were biting

Fly fishing for carp has been popular for a long, long time . . .

[dropcap]M[/dropcap]aggs Bros. Ltd., a London Antiquarian bookselling firm established in 1853, recently made a rather sensational find: a manuscript breviary (refers to a collection of Christian orders of prayers and readings) belonging to one Leonardus Haslinger, a parish priest resident at Thalheim Bei Wells (see below) in the Traun Valley of Upper Austria, written in the 1450 and 1460s, which contains on the last pages, following the devotional text, a couple of pages listing artificial fly dressings, recipes for bait, and other fishing instructions. The Haslinger Breviary fly patterns predates the patterns listed in both the Treatyse of Fysshynge with an Angle (1496) and the Tegernseer Angel – und Fishbucklein (1500), the two earliest sources of artificial fly patterns post-Classical Antiquity, which featured Claudius Aelian‘s description of the use of an artificial called the Hippouros on a trout stream in Macedonia.

This important item was scheduled to be offered for sale at the shortly-upcoming New York Antiquarian Book Fair for $185,000, but it was snapped up in advance of the event by an as-yet-undisclosed institutional library.

In consolation to the public, the Haslinger Breviary was exhibited at a special meeting of the Anglers’ Club of New York for those willing to pay an entrance fee of $75.

The American Museum of Fly Fishing will be publishing a translation by Richard Hoffman in the Spring issue of American Fly Fisher.

• Thalheim bei Wels is a town in the Wels-Land district in the Austrian state of Upper Austria.

NOTE: Watch YouTube video. It is not only an explanation of fly angling at its earliest but a hoot because fly fishing for carp was a big deal in the mid-15th century. BTW: You could have had the tome, Haslinger’s Breviary, the only one ever in published, for $239,621.25, or $185,000 pounds.