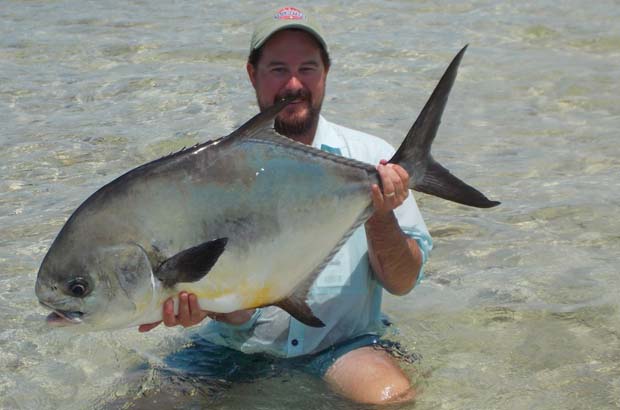 Fly Tying: If it eats crabs, it will eat the CCT Permit Fly [dropcap]T[/dropcap]he CCT Permit Crab Fly is an incredibly easy fly to tie and is very effective on permit and any number of other species that eat crabs. The fly should be tied in a range of colors to match the bottom you are fishing over and on any hook you would like including 60° keel hooks. Here, we have suggested the old standby or its more modern counterpart, Mustad’s Signature Series 34007. The CCT BodyFiber makes the fly, made by Cascade Crest Tools, you simply wrap the fly, tie it off and trim. Be sure to use sufficient cement to secure the material to the shank. 1. Set the hook, point down, in the vise and sharpen as necessary.

3. Wrap the thread back to the bend of the hook. Select two or four of the feathers, strip the fluff off to the barbs as shown. Match the feathers so that the stems line up and with the bends out, set them on the top of the hook shank. Tie loosely at first and then tighter as you wrap back towards the eye of the hook. Cement the wraps in well. 4. Tie in the tip end of the CCT Body Fur using just the tip of the binder and wrap the thread in front of the eyes. Be sure the fur faces back towards the hook bend. Wrap (called palmering) the CCT over the hook shank working your way towards the eyes. Make one wrap just in front of the last until you reach the lead eyes, tie off the body fur just behind the eyes using a crossing wrap over the eyes. Cut the trim excess off. Whip off the thread and trim it close. 5. Using a bodkin or comb, tease the body fur out in all directions as shown. Using a pair of fine scissors, trim the top and bottom of the fur flat. Shape the sides into a crab body. When you are satisfied, reattach the tying thread in front of the eyes. 6. Weed guard: Cut 2” of 16# Hard Mason mono and fold in half, pinch the bend into a sharp fold. Slide the mono over the hook shank with the legs aimed towards the hook point. Wrap the tread around the weed guard about six turns and then cross behind the opposite way. Flip the fly upside down and separate the legs, wrap a couple of turns around the close leg and pull the thread under the shank, wrap a couple of courses around the far leg spreading them apart until they separate. Whip finish and cement the head.