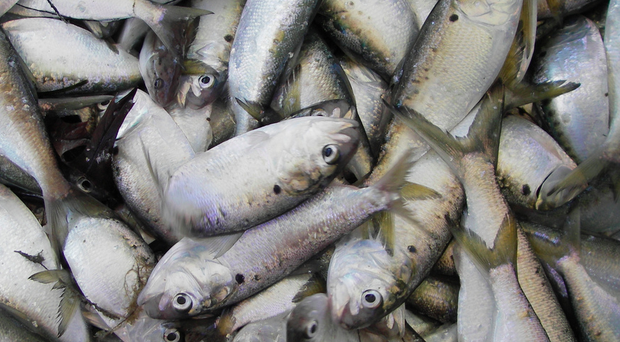 Fool’s gold: what fish oil is doing to our health and the planet

If you don’t think that Omega Protein®, the largest menhaden fishing fleet and omega 3 processor in the US, isn’t going to launch a ‘tobacco like misinformation ad campaign’ to protect its corporate person (Citizens United), you are naive.”  – Skip Clement Author Paul Greenberg spends a year eating fish at breakfast, lunch and dinner to help answer the question: “What fish should I eat that’s good for me and good for the planet?” Image from YouTube/PBS special.

NOTE: Greenberg is the author of The Omega Principle: Seafood and the Quest for a Long Life and a Healthier Planet and the book Four Fish: The Future of the Last Wild Food, and American Catch: The Fight for Our Local Seafood. – FLM

[dropcap]O[/dropcap]mega-3 is one of our favourite supplements – but a huge new study has found it has little or no benefit for heart health or strokes. How did it become a $30bn business?

The omega-3 industry is in a twist. Again. Last week, Cochrane, an organisation that compiles and evaluates medical research for the general public, released a meta-analysis – a study of studies – to determine whether or not omega-3 pills, one of the world’s most popular dietary supplements, reduced the risk of coronary heart disease. After comparing 79 trials involving 112,059 people, the researchers could find “little or no difference to risk of cardiovascular events, coronary heart deaths, coronary heart disease events, stroke or heart irregularities.”

I can’t say that I was particularly surprised. Over the past 15 years, more than 20 studies have shown a similar lack of effect. But what does surprise me is how we continue to look at the world of fish and seafood through the amber lens of a fish oil capsule. Omega-3s do something in our bodies – and probably something important. But without the larger context of the marine organisms that contain them, omega-3s get lost in the noise of human metabolism and modern marketing. Without healthy menhaden stocks and other forage fish, seabirds and a myriad of prey fish, like this osprey become scarcer, smaller in size and weight, less capable of reproduction and a cycle of deprivation takes hold. Photo posted to Flickr by russimages – commons image.

The confusion arises in part from the historical baggage of fish oil and the $30bn (£23bn) industry associated with omega-3 extraction. Once upon a time, fish oil solved a major human health problem. But it had nothing to do with coronary heart disease. During the Industrial Revolution, a disease became increasingly prevalent throughout northern Europe: rickets. Malnourished children in sunlight-poor urban slums often ended up bowlegged by adolescence. Researchers eventually pieced the puzzle together and concluded that the disease was caused by a deficiency in vitamin D, which the body naturally generates in the presence of sunlight. And, as it turned out, vitamin D is stored in high amounts within the liver of codfish.

A Norwegian pharmacist named Peter Möller seized upon this finding (and many other anecdotal stories about the curative properties of cod-liver oil). Using a patented chemical process, he arrived at a product that, he announced to the world, “didn’t taste fishy.” Möller and his advertising team then launched a campaign to institutionalise the regular use of cod-liver oil, regardless of whether you were at risk of rickets or not. The campaign was a success: a spoonful a day became common practice. Möller built his company into an international presence and died in 1869 with 70 cod-liver oil steam factories to his name, churning out 5,000 barrels of the stuff a year. By the time omega-3s started to be a focus of medical research, there was already a rosy feeling around fish oil.