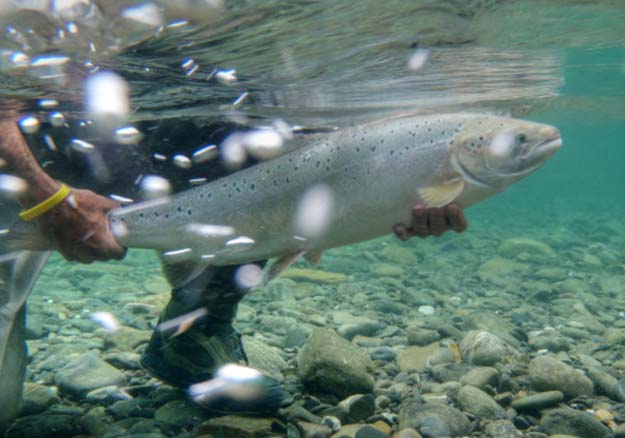 With the path to inland spawning grounds clear, the species rebounds with unexpected speed, benefiting everything from bald eagles to Atlantic cod.

[dropcap]M[/dropcap]otorists crossing the bridge over the Kennebec River this spring and early summer were afforded dramatic views of one of Maine’s mightiest rivers, a chain of islands and warships under construction at Bath Iron Works.

But one of the most awesome sights was hidden from view: millions of fish swimming under the bridge in a pilgrimage from the Atlantic Ocean to their spawning grounds in lakes, rivers and ponds scattered over hundreds of square miles of southern, central and western Maine.

River herring – in the midst of a dramatic comeback in Maine’s rivers with the recent removal of dams that blocked their spawning runs for decades – had a banner spring run this year, with millions of fish traveling up the Kennebec and Penobscot and the best run in decades recorded on the St. Croix. This was despite heavy rains this spring that created extra challenges for the fish. The Kennebec River is not a small river. Christened the USS Michael Murphy in Bath, Maine at the Bath Iron Works on May 7, 2011. Photo Jim Upham taken from his backyard.

The recovery of the small schooling fish is having dramatic secondary effects, as they represent a perfect food source for everything from bald eagles to Atlantic cod, and researchers anticipate future benefits as the herring’s numbers grow in the coming decade.

“You just don’t expect ecosystems to bounce back so quickly,” says Joshua Royte, a conservation scientist at The Nature Conservancy in Maine, which played a key role in a collaborative project to remove the Penobscot dams. “These rivers are coming back gangbusters and there will be children growing up now who will never know there was a time when you couldn’t run out to see fish running in these rivers.”

River herring – as alewives and blueback herring are collectively known – are a key forage species for larger animals, packed with energy-rich oils craved by everything from young cod and halibut to adult bald eagles and ospreys. But a decade ago the offical count of their spring spawning run was down to just 3,500 in the Kennebec, 1,300 in the St. Croix and one solitary fish in the Penobscot, the result of two centuries of dam building in rivers and streams throughout Maine to power mills or control water levels. Herring are unloaded from a fishing boat in Rockland, Maine. New England fishermen are catching staggering amounts of herring, signaling the rebounding of a fishery that collapsed in the early 2000s. But some conservationists and rival fishermen say the fishery, which is important for both food and bait for tuna and lobsters, is wiping out other fisheries with its massive pelagic trawlers. Associated Press/Rubert F. Bukaty

With nearly 3.8 million fish counted at its fish passages this year, the Kennebec is now home to one of the largest river herring runs in North America, and Maine is likely to become the two species’ worldwide epicenter as the herring colonize newly opened habitat. The Penobscot saw 1.9 million, on par with last year, while the St. Croix’s 158,000-fish run was the largest in two decades.

Their return is the result of the removal of major dams at Augusta and Winslow on the Kennebec (in 1999 and 2008), Old Town and Veazie on the Penobscot (in 2012 and 2013), and the opening of fish passages at Baileyville on the St. Croix in 2013, restoring access to thousands of square miles of river herring habitat across the Maine interior, some of which was seeded with tens of thousands of small fish by the Department of Marine Resources to help kickstart recovery.

Additional habitat is being opened every year on these and other rivers as the result of smaller scale restoration projects to let the fish pass minor dams and other obstacles in tributary rivers and streams.

“The removal of the big dams rebalanced the main stem of the Penobscot and set the stage for shad, salmon, eels and alewives to get much more habitat much farther up the watershed they need for reproduction and to reach maturity,” says John Burrows, director of New England programs at the New Brunswick-based Atlantic Salmon Federation, a conservation group “For that to happen, a lot of these tributaries that were dammed much earlier – including pretty much every lake and pond outlet – need fishways.” The salmon federation has spent $4 million in recent years on projects to restore fish passages on these smaller tributaries, opening more than 22,000 acres of additional habitat for the fish. Other organizations and individuals – including alewife harvesters – have helped restore runs on smaller streams from North Haven to Phippsburg, with more in the pipeline. Runs are expected to grow as more habitat opens up and ever-greater cohorts of fish mature and return to Maine’s rivers.

River herring harvesters faced challenges this year placing their gear in rain-swollen rivers, but most still had a good season, says Jeffery Pierce, a Republican lawmaker from Dresden who heads the Alewife Harvesters of Maine, whose members trap fish primarily to sell as lobster bait. “With the big water it was hard to jeep their gear in, but it was still a really good year all and all,” he says. “The trends are positive because Maine is doing a great job cleaning up its streams and rivers.”

As more habitat opens up, Royte and other experts expect the herring runs to grow dramatically, with the Penobscot alone potentially supporting 10 million fish annually.

The ecological effects could be profound, as the fish can help clear lakes and ponds of excess nutrients and algae and are excellent food for cod, eagles and other predators. It’s also well-timed as Atlantic herring, an oceanic species that once provided an alternative food source, have been in dramatic decline in the Gulf of Maine.

Among the early beneficiaries are bald eagles. Read the complete story . . .

All things considered, these critically low numbers are at least going in a positive direction compared with 2016. Small know but with foragre fish and downed dams they will come.

• The Kennebec has had 26 large salmon and 2 grilse.

• The Narraguagus has had 8 large salmon and 14 grilse.

NOTE: It is also a relief that the State Government Budget Impasse in Maine did not last more than a few days. While some facilities are largely run by the power company, other smaller facilities on other rivers relied on Maine state employees.