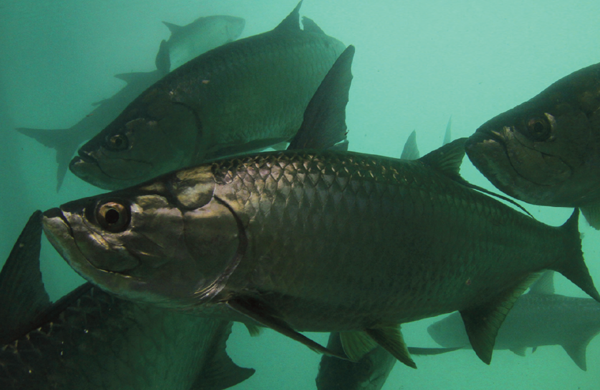 Tarpon season. Photo taken by Adrian Gray at Big Pine Key, Florida in May of 2011

[dropcap]M[/dropcap]arine artist and underwater photographer Adrian E.Gray, and avid fisherman, was born and raised on the southeast coast of South Africa where he was first exposed to the marvels of marine life as a very small child. The vast ocean and its tidal pools were just a short walk from home where his parents, Edwin and Kate, raised gray and his sister. “I used to plow through tidal pools for hours upon hours, plucking and feeling and looking at everything that inhabited those shallows. That’s where the fascination began,” gray explains. Ocean life became the subject matter of countless school assignments as well as drawings. In the 1980s, gray went to school in New York and learned to fish Long Island Sound for striped bass and various local reservoirs for trout. He later settled in Miami, Florida after graduating with a degree in marine biology from the University of Miami. Living in South Florida had a significant impact on gray and fueled his passion for fishing even more.

“Tarpon, snook, permit, bonefish, sailfish, dolphin – I couldn’t get enough of it,” said Gray. Following graduation in 1999, he went to work for Dr. Mitch Roffer of Roffer’s Fishing Forecasting, which introduced him to computer graphics as an image analyst-oceanographer.

“Although I worked as a fishing analyst/oceanographer, the job also involved creating visual graphics and developing text for analyses. That led to my current position at the International game Fish Association,” said Gray.

Working for IGFA in Dania, Florida for the past nine years, Gray creates and produces the organization’s multimedia materials, including its world famous World Record Game Fishes yearbook. Moreover, Gray serves as the organization’s in-house photographer, videographer and website support. Gray never took any formal art training and is essentially self-taught. He started off by sketching fish for fun. A friend recognized talent in gray and gave him paints and an easel to express his passion for fish in an artistic way. Nevertheless, over the
years, although fishing was Gray’s passion, art was not.

“I became a marine artist because of a fish catch that became so memorable to me that I felt compelled to paint it and share it with others,” said Gray. His first oil painting, “Bridled Anxiety” portrays the memorable catch of an unusually large 400- pound swordfish that he got to experience over 10 hours as the fish struggled for its survival in a give and take battle. Several people who saw the painting offered to buy it. Yet an artist friend told him not to sell it. Start a collection first.

He has created more than 30 marine paintings, many of which have been featured in magazine art galleries and many of which he has sold. Gray was honored to be chosen as Artist of the year in 2009 for the Atlantic Blue Marlin Tournament in St. Thomas. Oils have become his medium of choice, although he says they can be more challenging to work with than acrylics and water color.