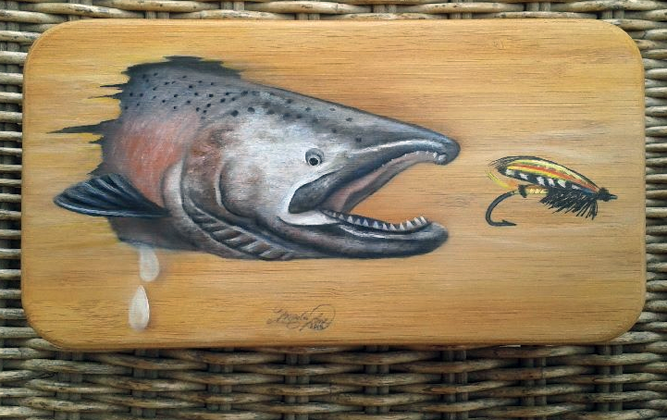 [dropcap]F[/dropcap]rom her earliest childhood, no pencil or similar instrument used for visualizing impressions was safe from the hands of Angela Lenz. The need to reproduce what was seen, experienced, dreamed, or fantasized was strong and important. She recorded her impressions on paper and canvas meticulously. Since 2004, Angela has earned her living with art.  She originally painted mostly landscapes in a classical style as well animal portraits. Accidently, if such things are “accidents”, Angela became acquainted with people in the fly-fishing world. Since she had long painted wooden boxes, it was a natural progression to paint bamboo boxes made to hold a fly-fisher’s flies. Favorite subjects, in addition to classical flies and nymphs, are kingfishers and, of course, the fish themselves. Foam with slits allow the bend of the fly to be backed in, thus preserving the integrity of the foam for years to come.