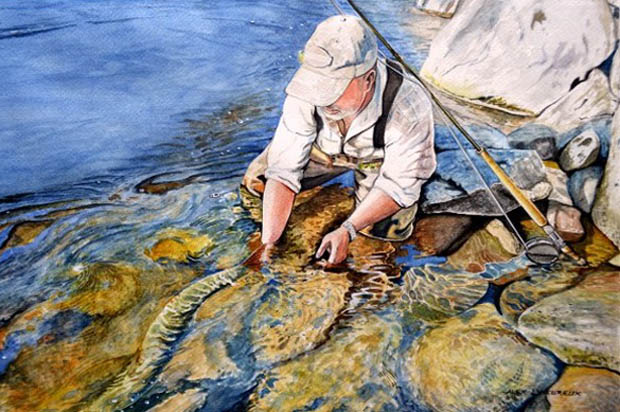 dropcap]F[/dropcap]or the last four years our editorial staff has met, formally, once a week via a conference call to discuss a myriad of things. The most fun has been picking an artist (painter, sculptor, photographer or craftsman) for our popular Profile. Once selected, the task begins by running the artist down, which in too many instances is not as easy as one would expect. It seems many artists lived in their art world exclusively and hoped for call-backs – leaving our readers and us high and dry for a Profile story.

To avoid the disappointment of failing to provide Profile each week and spending far too much staff time tracking down each artist, we now select an artist, research him or her, write an “About” and display one image we feel best examples the artist’s skill-sets. And, of course, provide a link to their website.

This Friday, our editorial staff selected a Canadian. We’ve admired his work for some time. His bio is quite singular.

About the artwork of wildlife artist Alexandre L’Heureux:

He was born in Repentigny, Quebec (just North of Montreal) in December of 1980. At the age of seven, he moved to Florida with his family to travel around the Caribbean on a sailboat. After four exciting years of touring, his family moved back to Canada – this time to settle in his mother’s home province of New Brunswick.

Alex developed a passion for drawing at a very young age, and his travels produced many exciting themes from which to choose. Mostly self-taught, Alex practiced his love of art through many mediums including painting, sketching, and even carving. With running scholarship to a couple of high-end universities, Alex studied art and architecture for five years and later moved to North Carolina to pursue his passion for running. In 2007, his career as an athlete came to an abrupt halt after a severe Achilles problem caused him to put away his racing shoes.

Alex had put away his pencils for a couple of years – returning to Canada to focus on a new career in law enforcement. Ironically enough, it took a medical setback for Alex to pick up the pencil again and in 2012, began to display his art for the first time in his life.

Alex now lives with his wife and three kids in the Northern part of New Brunswick where he continues his passion for art. Bonefish on a fly.