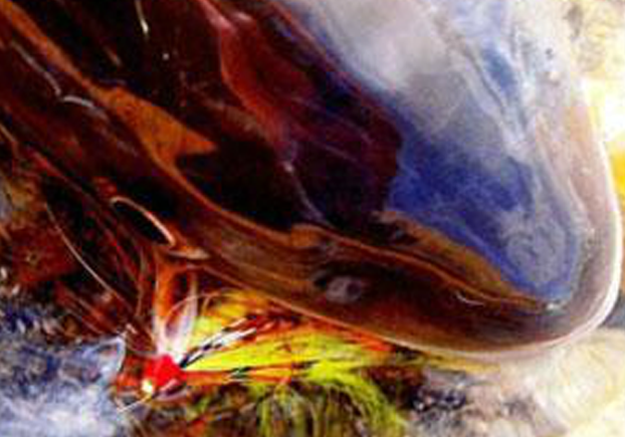 R. B. Meiser provided us with the first industry adopted “oversized” single-handed casting fly rod. Or was it an undersized spey rod – hmmm? Let’s call it a switch rod and be done with it – that’s what he called it This is what better looks like – R. B. Meiser built two-hander.

Meiser, fishing spawning steelheads in the tributaries of Lake Michigan (on foot), could not get into bite range with his 9-foot fly rod. His big flies, destined for spawning steelhead were short. He tinkered with making longer fly rods. He used nearby rod producer St. Croix’s waste drops and managed, but he had heard that long rods were the thing of the Northwest. It more than tickled his curiosity.

Bob, plunged his efforts into rod building and along the way became friends with notable Northwest “big rod” salmon-steel headers, and the switch rod became a reality (a funny story).

Meiser’s nine-foot nine-inch fly rod lead the switch way, and it was adopted industry wide. That first “model” concept remains in great demand at R. B. Meiser Fly Rods. The 909 Series, as it is so-called, is probably the best “boat” fly rod (river, lake or offshore) and surf fly rod ever invented. The 909s castability (properly lined for the task at hand will enable any angler extraordinarily long and accurate casts) and unequaled fish fighting capabilities separate it from all other “boat” rods, in my opinion.

A 909 9/10 switch rod will ably tackle spring tarpon and any sail that swims. A single-handed 10-weight is out of its league given those same animals to turn, fight and lift.

You would think that a man who had designed a totally new style of fly rod – launching a thousand fly rods, would be satisfied. No. Meiser is as curious today as he was when in his twenties

The performance characteristics of Meiser’s longer rod, switch rod, fast consumed Sage, Loomis and all the other rod manufacturers. Today, switch rods line the racks of the better fly shops in the world, but in the Eastern U. S. – not there yet.

Today, switch rods are in great demand in the Northwest, Alaska, Great Lakes, Atlantic salmon coordinates, England and worldwide. But especially so in Scandinavia where switch rodding techniques and builds have addressed real issues like producing better handles (that’s a big deal)… including the all important butts. NOTE: Those design advantages are found on “all” Meiser’s two-hander fly rods. Our Nordic brothers and sisters have also perfected “casting” switch rods for both overhand and two-handed pitches

Bob Miller, retail manager for Red’s Fly Shop, Ellensburg, Washington had this to say: “I agree with you about the limit length switch rods. After 11-0 they are too difficult to manage should an angler need to cast overhand for more than a few casts. For most, it becomes physically a taxing effort, and there would be little or no benefit. However, using the longer versions of so-called switch rods… which are now in the plus 12-foot range are much better at two-handed casts, obviously.”

Bob added: “Trout anglers that wanted the switch advantage have moved to a newly named fly rod called micro spey. The micro version satisfies the preferred two-handed approach when fishing for trouts. Their switch lengths are  specifically for 2-, 3-, and 4-weights.”

BTW: Micro’s are super fun to cast – well worth a test drive, but I’d make it a point to call Red’s for an orientation. If you’re ready, let them set you up. Like switch rods, these micro spey rods are drifting into the 12-foot range.

Miller went on to say switch rods are still in great demand in the Northwest and his shop has no shortage of choices. Red’s has produced numerous YouTube videos on the subject (just Google same).

Where blondes are smarter

If you’re having difficulty using your switch rod: getting distance, being accurate, or tiring because of “working” hard… you’re doing the two-hand cast bass-ackwards. How? You ’re using the right hand (if right-handed) as the lever rather than as the fulcrum. Just ‘switch’ that up and voilà, you just made your angling life better: cast with less physical demands (shoulder or wrist issues), achieve longer distances, become more accurate, and catch mo-betta.

Rather than talking through the right way to get the best casting results, check Henrik’s video out. His lesson applies verbatim to switch casting

Note: Featured Image is a photograph taken by photographer Tokushi Yun of Japan. His website is called Slow Fishing.