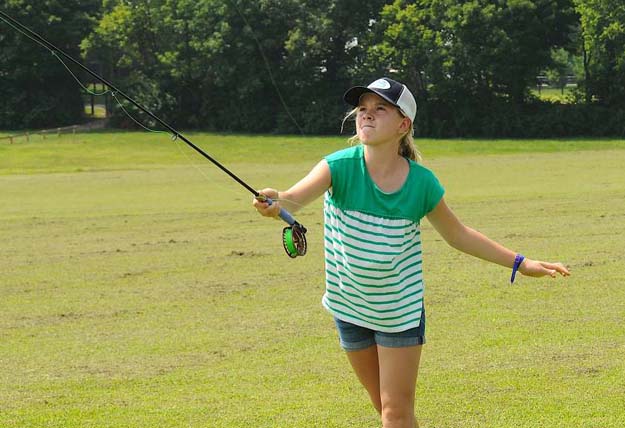 Get better at casting now with Commando Heads

The fly rod is what?

[dropcap]Y[/dropcap]our uncle Vinny gave you a brand new, top-of-the-line, fly rod and you’re complaining? You say it’s too fast, too slow, too heavy, too light, and can’t throw bushy flies.

You don’t know what you’re talking about. Here, put this fly line on, and you can forget all your troubles, forget all your cares because for about $137 you can straighten it all out.

You get a new fly line, new running line, new tips – just add a leader, and a wallet to keep them in. With these new tools, you are now ready to take certain steps.

You can now cast using a water haul and cast further than expected and more accurately. Yes, just like the spey boys and girls do. You do not have to ‘ever’ double haul again (it’s a single, non-stop cast). You can roll cast distances not possible before, produce accurate casts as a matter of choice, and cast all day without calling for a reliever in the ‘noon’ inning.

You will fear no river bank, bush, canyon wall or forest stealing your fly – frustration will never be summoned.

With a made to order leader system and looped connections, you’ll be able to quickly changeout from floating to mid-water or to fast sinking and start drifting along the bottom. Too, add different flies (if need be). All very quickly – not the old changeout way.

The fly line is the invention (extreme modification) and vision of a West Coaster with decades of angling experience and the short suit of aged knees, which we’re told was the “stimulator” for his coming up with a better way. He was willing to try what was never tried before.

He made improvements to the “common” shooting head fly line – achieved his goal with a new, heretical version and also came up with one helluva shooting line as supporting cast.

However, it was the added benefits that baffled everyone

Beginner fly casters were no longer beginners, journeymen and women got to be pros, and pros got to invent the yet to be invented.

Ward made fly casting easier and better with “egalite” improvement across the broad spectrum of angler talents.

Start thinking in grain weights for your fly lines, not 2-weight, 9-weight . . . Okay, okay but folks have been adding short mono-core lines (shooting heads) for many years, enabling them to reach previously unreachable distances, and getting deep – the whole point of using lead lines. But that was not an easier softer way. It was fraught with issues and a bear to manage.

What about there being umpteen versions of shooting heads already out there?

Other fly lines can, of course, achieve the same performance as the Commando Head and Lazur setup, but not as easy nor with as many options. The two-hand cast or single hand “without” having to double haul is an enormous OPST benefit. The OPST Skagit is not a “perfect” performer in every possible situation, but for one rod all day, it’s a mountain of improvement for any angler.

The remaining issue for Ward’s “Commando Head” fly line is casting upstream and not frightening the trouts, but some modifications allow for reasonable approaches. We’re sure Ward/OPST will figure something out. If they can, then there might not be any other fly line needed! For those with a briny preference, the Commando Head and Lazur Running Line are even more worthy and productive.

More than in riverine applications, the distance of a cast, dealing with the wind (it blows 15 to 20 almost all winter in the Keys and the Bahamas), and big flies are better remedied with an OPST setup.

Flies, bigger than the usual for freshwater, are predominant when fishing the salt. Think kings, sharks, sails, snook, reds, blues, stripers, and more. The Commando and Lazur are perfect fits.

Although Ward has critics, I’m not one of them. If the Commando/Lazur makes fly casting easier for any level of casting classification, presentations better, and has the reserve of casting 100-feet – what’s to criticize?

Watch this short video – it might rid you of stinking thinking. Disregard his fishing a small stream with lightweight rods – think any weight

NOTE: Featured Image –  You don’t have to be Maxine McCormick – the No. 1 female fly caster for accuracy in America. BTW, she beat the legendary world champion, Steve Rajeff, considered the greatest caster in history. Photo credit Tom Stienstra of San Francisco Chronicle