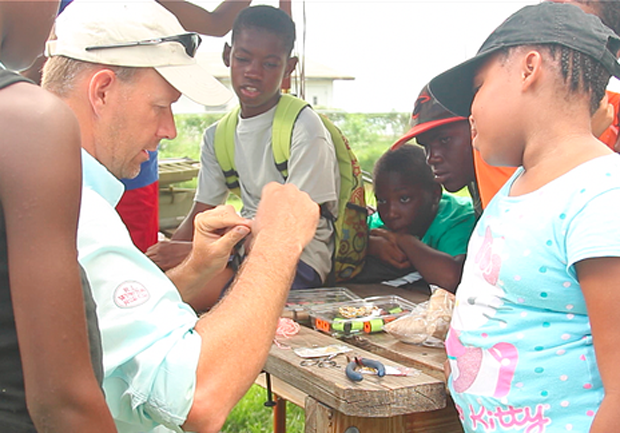 Ghost Stories is a research initiative by veteran guide and instructor Tom Karrow. By documenting the lives of pioneering Bahamian guides, Karrow will help design resource management plans for the islands. The project will result in a conceptual book, film documentary and collection of short films. Learn more about Tom in our profile of him or donate to his research fund.

[dropcap]W[/dropcap]hen I was a youngster I remember my grandfather, whom I adored and deeply miss, telling me that things when he was a boy were significantly different; the snow was deeper, winter was longer, trees were larger and more prolific, animals were more prevalent and brook trout in the spring creek were more abundant and sizable! (My brother always used those claims to justify the small fish he caught…. I could not however!) 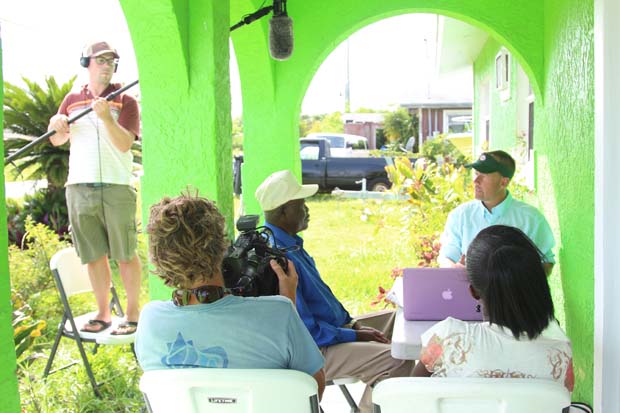 Memory has a tendency to fade with time, but there likely was truth to my grandfather’s claims. The problem is that there is no way to ‘measure’ those recollections/stories and use them in current studies for comparisons.

In 1995, a scholar by the name of Pauly, introduced a concept known as the ‘shifting baseline syndrome’. While he may not have been the first to conceptualize this ideology, his work greatly advanced the idea; it explains what my grandfather was talking about, and it illustrates the importance of my Ghost Stories research.

From a fisheries perspective shifting baselines are critical, so what does this phrase mean? In short, what we assess as ‘normal’ is based on our early memories and successive generations are experiencing new ‘norms’ that are increasingly diverging from the ‘true’ normal. What is the ‘true’ normal? The way things were before significant human influences, the way things were when people first stepped foot onto a given shoreline, stream, lake, flat or off shore current…. long ago!

To further explain this, consider the following graphic 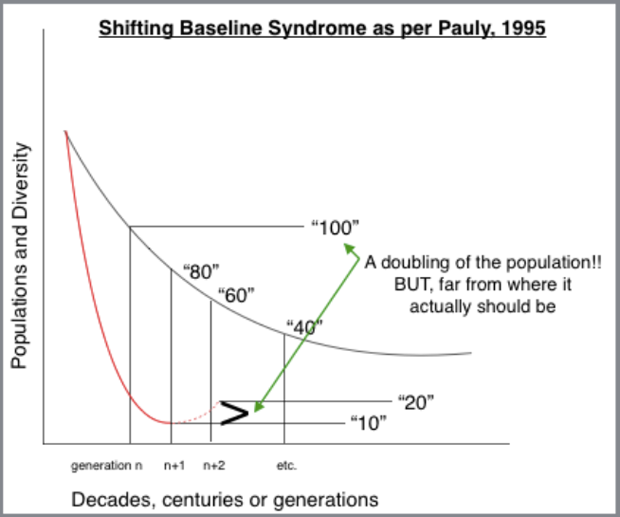 “Generation n” probably was one before my grandfather but for simplicity sake, we can assume it represents our current elder generation, 80-90 years olds (or older). Flora and fauna populations when they were young were more expansive and diverse than they become at “n+1” , “n+2”, or even later generations. So, if we apply an arbitrary number to this, and we assign “100” to “generation n”, then successive generations start at about 80% of what “generation n” was, further falling to about 60%, or even 40% in generations since my grandfathers time. Now there is a significant problem with this image. Rates of decline in certain species exceed those represented in the diagram. For example, it has been estimated that global Shark populations have declined by 80-90% in the last few decades (a single generation), thus making the decline far steeper! (See red line) As a result, if a new generation bases shark populations on ‘20’ as a population ‘baseline’, or even 10% of what they once were, ‘positive’ growth, in the population through conservation measures, appears significant. In fact however, even a doubling of the population when starting at 10% or 20% of the ‘true’ value, is still far from where the population would naturally be.

Baselines are important for resource managers, they provide a measure to assess changes and a goal to achieve towards returning things to “the way they were”. In commercial fisheries, assessing a true baseline is relatively simple given catch rate records. In recreational fisheries however, which arguably are far more financially important, these facts are often missing. So, how does one attempt to manage a resource without knowing what the resource should look like?

Across the Bahamas, NGO’s like Bonefish and Tarpon Trust, the Fisheries Conservation Foundation, the Nature Conservancy, and the Bahamas National Trust are working hard to protect valuable bonefish habitats. Their work to date is based largely on tagging, tracking and DNA studies. While valuable, these studies do not help in assessing the true baseline, and an historical record of the bonefish population does not exist. Well, in a sense they actually do, and through Ghost Stories research, I am consulting with elder Bahamians to develop a baseline. This baseline will prove vital in future management initiatives. 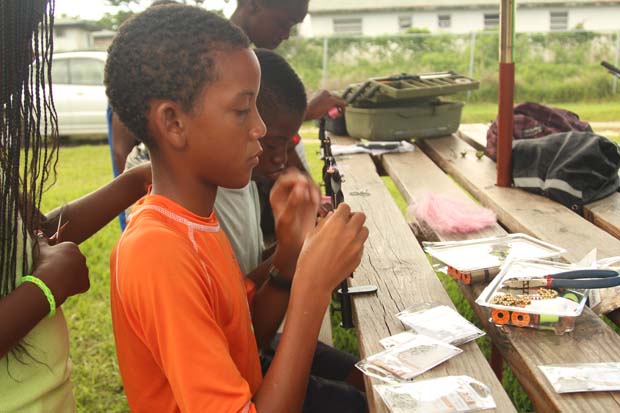 Tom Karrow working with the next generation of Bahamian guides, teaching them to tie flies at the West End Eco Fishing Camp for children (WEEFC). Hopefully their baseline for Bonefish populations, will be more significant in fish numbers than their parents was, and closer to the way it was for their grandparents or even great grandparents! Thanks to the WEEFC and the BlueMarlin Cove Resort for assistance when working at the West End of Grand Bahama Island!

So, how is the Bahamas Bonefish population?

Well, it depends who you ask! Guides I have consulted with who have guided for 10 or so years, tell me the fishery is great, it is growing and getting better all of the time, reflecting conservation measures being implemented. However, when I talked to David Pinder Sr , Stanley or Leroy Glinton, men who have been guiding for 40-60 years, they tell me when they first started guiding for bonefish, “Bonefish were everywhere”! Populations were way higher and distributions more expansive. In fact, these guides used to pole from the dock, because bonefish were so numerous!

Now, we need not get depressed by such claims of doom and gloom. Instead, we should embrace them, cherish the knowledge these elder guides have, work with them and appreciate their insights in helping to manage our precious fisheries resources, before they are gone and their knowledge lost forever. That is exactly what my Ghost Stories research across the Bahamas is working to do; work with the eldest guides to learn about the past. Research is ongoing and I expect to return to the islands in the upcoming weeks to continue documenting and learning from the Bahamian greats!

If you are interested in learning more about this vital project or wish to stay in touch, please check out my website or follow me on Faceook where updates will be provided as they unfold.

A related article on fishing down the food web will be featured in FLM in the next few weeks. Thanks to Fly Life Magazine.com, BTT, FCF, Nautilus Reels, R.L. Winston Fly Rods, FishPond products, and all of the other supporters of this research endeavor. For more on the Shifting Baseline Syndrome, see Pauly explain the concept himself on a TED talk from 2010.