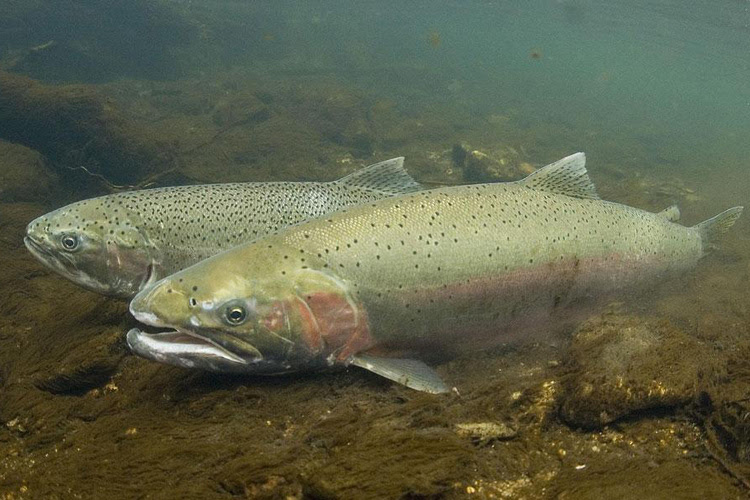 [dropcap]N[/dropcap]OAA Fisheries has approved a management plan for threatened Skagit River steelhead that includes tribal fisheries and a catch-and-release sport fishery, the first spring recreational fishery on the Skagit since steelhead numbers began rebounding nearly a decade ago.

Skagit River steelhead one of 22 populations comprising Puget Sound steelhead, which was listed as threatened under the Endangered Species Act in 2007. The number of spawning steelhead in the Skagit River reached a low of about 2,000 in 2009, but has since climbed to an average of 8,800 from 2013 to 2015.

NOAA Fisheries concluded that the management plan, submitted by the Skagit River Indian Tribes, Skagit River System Cooperative, and Washington Department of Fish and Wildlife (WDFW), meets relevant criteria under the Endangered Species Act and would not appreciably reduce the likelihood of survival and recovery of wild Puget Sound steelhead.

“The state and the tribes struck the right balance,” said Barry Thom, Regional Administrator of NOAA Fisheries’ West Coast Region. “They’re providing some fishing opportunities but also making sure that we protect steelhead in the Skagit River for the future.”

Besides the catch-and-release sport fishery, the new management plan includes treaty ceremonial and subsistence steelhead fisheries, and treaty commercial steelhead fisheries, which provide tribes with the opportunity to sell their harvest. WDFW and the Skagit River Indian Tribes will jointly manage the fisheries, closely monitoring fishing activity and providing enforcement.

The fishing opportunities in the management plan reflect increasing numbers of steelhead in the Skagit, historically the largest and one of the most productive salmon rivers in Puget Sound.

Collectively, steelhead in Puget Sound remain far from recovery, with conservation efforts focusing on habitat protection and restoration. NOAA Fisheries is actively collaborating with state, tribal, and local governments and stakeholders to develop a recovery plan, anticipating a draft by the end of 2018 that will be shared for public comment.

NOAA Fisheries received more than 120 comments earlier this year on its proposed evaluation and pending determination to approve the fishery management plan. The comments represented a wide range of views on the proposed fishery, from support for the management plan to concern about the recovery of Skagit River steelhead and opposition to the fishery. NOAA Fisheries considered and incorporated these comments in its final evaluation and approval of the Skagit River fishery management plan.

See the WDFW website for the details of specific fishing opportunities this spring.