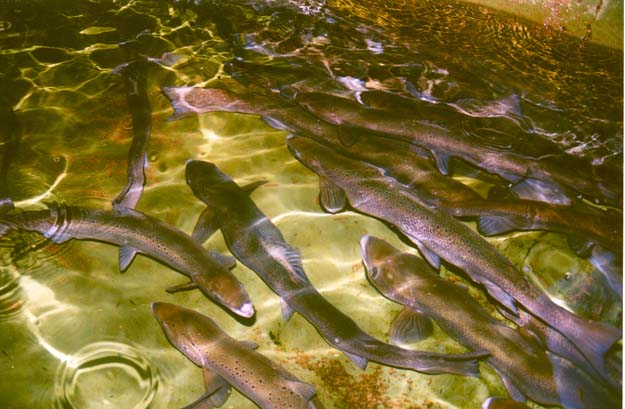 The Penobscot River is New England’s second largest river, draining nearly one-third of the State of Maine with a watershed area of 8,570 square miles. Image NOAA.

[dropcap]T[/dropcap]he Penobscot River is used as a spawning or nursery area by 11 migratory fish species, including three listed under the Endangered Species Act. The river hosts the largest run of Atlantic salmon left in the United States. Historically, fisheries on the Penobscot River were bountiful, with an estimated 14 to 20 million alewives, 75,000 to 100,000 Atlantic salmon, and 3 to 5 million American shad. The largely forested Penobscot River watershed has a rich cultural history of commercial, recreational, and subsistence fishing. It is home to the Penobscot Indian Nation, which still occupies part of its ancestral homeland on Indian Island, surrounded by Penobscot waters.

In the Penobscot River Habitat Focus Area (HFA), nature-like fishways are under construction in the Bagaduce River watershed. These engineered, yet natural-looking structures allow fish migration upstream into freshwater habitats. Located in the town of Penobscot, Maine at Wight and Pierce Ponds, the projects will primarily benefit alewives which were previously unable to utilize these habitats due to barriers. Also in the Penobscot HFA this past summer, NOAA leadership visited several of the completed and ongoing projects contributing to Atlantic salmon recovery in this region. The HFA is collaborating with local groups and communities to improve the passage for Atlantic salmon and better understand fluctuations in their population.

Over the centuries, human activities have caused adverse impacts to the watershed. Dams, culverts, water pollution, and overfishing have contributed to an almost complete elimination of many sea-run, migratory fish species and their habitats. With fewer alewife and blueback herring, important commercial species like cod have lost a key food source. This has also affected tribal subsistence fishing and the historically large recreational fishery for Atlantic salmon.

Degraded water quality has led to a loss of bottom-dwelling communities, restrictions on fish consumption, and overgrowth of algae. All of this has diminished the watershed’s ability to recover from the effects of climate change, such as warming water temperatures and the potential increase in flooding.