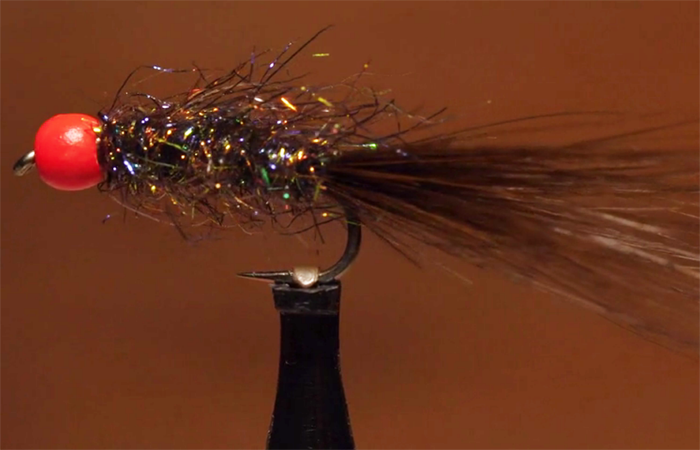 I tie a sister version on a tube and use many color combinations. With only a few common materials needed to tie it, the fly begs for innovation.

[dropcap]A[/dropcap]ny fly fisher with an exposure to Alaska, either slope of the Andes (Chile or Argentina), New Zealand’s North or South island, Kamchatka, or rich saltwater flats of the globe can vouch for the wonderment of a single fly pattern that doesn’t look like anything that ever lived in fresh or saltwater unfailingly attracts a bite.

That, of course, could be said about almost any game fish swimming for a living and biting weird stuff. That does not mean that you’ll find mice in a tarpon’s stomach or menhaden in a brown trout‘s stomach. But what it does say is that some flies have universal appeal, but only relative to what’s on the menus for the fish. For example, a shrimp-like pattern such as the Duane’s Crab Fly, developed by Capt. Duane Baker of the Florida Keys, looks precisely like nothing yet it successfully won, back to back, to back bonefish tournaments an attracts big bonefish feeding on shrimp – anywhere. It has also proven of interest to tarpon and snook anywhere shrimp are being served.

Split open an Alaskan Dolly and it may have 20 voles in its stomach, a bonefish 15 crabs, a brown trout unknown numbers half digested crayfish and sculpins, ocean size jack crevalle bulging with blue runners, stripers with salmon parr in the St. Lawrence Seaway, albies in Montauk with menhaden, sailfish in Pinas Bay with bonito, and basses anywhere with frogs, bugs and beetles and more.

Yet mouse eaters will all bite on a Whatchamacallit Fly that doesn’t look like a mouse; a Thingamajig Fly with EP fibers that brown trout in New Zealand or the Chattahoochee River in Atlanta feed on thinking its a crayfish. Big rainbows in Montana feeding on a blob they mistake for sculpin or a Fogetabout Fly with marabou in purple that resembles a cold slice of last week’s pizza that sailfish can’t resist.

Yes, that’s all a little over the top exaggeration, but it’s the point that matters. Some fly patterns legally ruled aliens by some uptight tyers, are the very flies that should be in your fly box – if you’re an adventurous and serious fly fisher.

The flies list is long and the nom de guerre clear to us – there are flies that keep-on catchin’ fish and don’t look like anything. For example,  Lefty’s Kreh’s Deceiver, Cam Sigler’s billfish flies, Charlie Smith’s Crazy Charlie, Bob Clouser’s Deep Minnow, Russell Blessing’s Woolly Bugger, and of course dozens more. Many of which are only known regionally around the world – like Duane Baker’s in the Keys.

If you don’t think this fly in the video looks like a fly that could catch a fish, watch the Vimeo, tie the fly (it’s incredibly easy to tie), and see what happens; you’ll like how you look on the water.