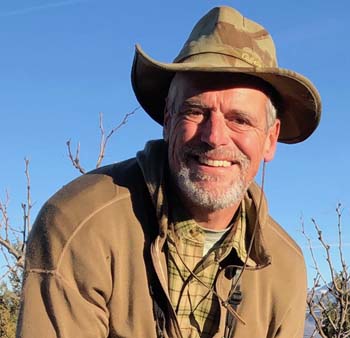 Ted Koch was a career conservation biologist for U.S. Fish and Wildlife Service before retiring in 2018. Photo courtesy of Ted Koch.

[dropcap]B[/dropcap]iologist Ted Koch has joined the Backcountry Hunters & Anglers North American board of directors, bringing passion and expertise on public lands honed during a career in natural resource management.

As traditional bowhunter and ecologist, Koch focused primarily on Endangered Species Act implementation, conserving the ecosystems on which people as well as fish and wildlife species depend, during the three decades he spent working as a fish and wildlife biologist for the U.S. Fish and Wildlife Service. His last position before he retired from the Service was as the assistant southwest regional director overseeing endangered species in Texas, Oklahoma, New Mexico and Arizona.

“During these challenging times when the very existence of public lands seems uncertain and support for public servants uneven, I’m glad to work with an organization like Backcountry Hunters & Anglers,” said Koch. “A career spent in public service working on public lands has demonstrated to me the importance of BHA and its members. I’m happy to roll up my sleeves and add my voice to those of sportsmen and women all across North America – along with those entrusted with their management – in speaking up for the places and experiences that are central to our identity as public land owners.”

Few of us can better appreciate the importance of our public lands than those dedicated individuals who commit to a life of work in their service. We’re honored to have Ted lend his knowledge and committed drive to BHA. Ted brings a formidable understanding of science-based conservation policy to the table, which will be critical to our continued growth and influence across North America.” — BHA President and CEO Land Tawney

Backcountry Hunters & Anglers is the voice for our wild public lands, waters and wildlife.

The coastal cutthroat trout (Oncorhynchus clarkii clarkii) also known as the sea-run cutthroat trout, or harvest trout is one of the several subspecies of cutthroat trout found in Western North America. Illustration by Timothy Knepp, U.S. Fish and Wildlife Service – a commons image.