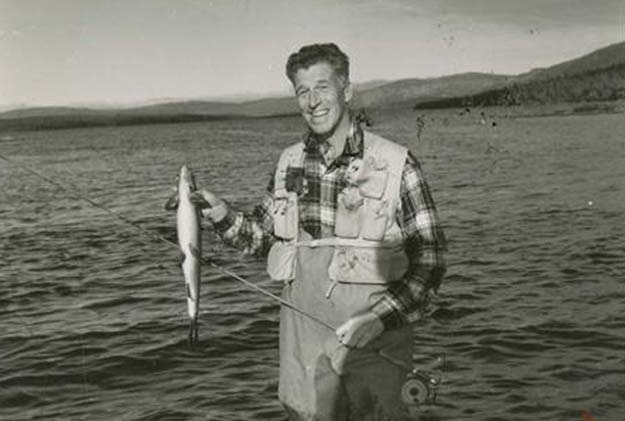 [dropcap]H[/dropcap]enry Leon Wulf, born in Valdez, Alaska in 1909, became angling’s most influential man of the 20th Century. He died on April 28th, 1991 in a plane crash near his home in Lew Beach, New York.

At the time of his death, he was the world’s best known and most respected sports fishermen, as well as an author, lecturer, innovator, artist, conservationist, and filmmaker. It is his salvaged celluloid that will be the subject of a movie now in production, titled “Lee Wulff: A Remarkable Life.”

Popularized Atlantic salmon fishing this side of the pond. He championed the welfare of Atlantic salmon, often and eloquently, arguing that it should be a “game fish” and not for the commercial taking. His point of view was finally accepted in Canada and the U. S., but almost too late.

He convinced an entire generation of Atlantic salmon anglers to drop the idea that you needed two-handed fly rods that were 14-feet long. A method inherited from the British.

He invented the now now-ubiquitous item of angling equipage…  the wading vest. The second film will be about Joan and it will parallel “Lee Wulff: A Remarkable Life” movie.

Joan and Lee were husband and wife, she perhaps as influential because she introduced fly fishing to thousands of women and children. Her methods are the baseline for all casting.

More than anything else, she is a brilliant fly caster and is known worldwide as an extraordinary casting skills teacher. The latter is a very unusual combination. People with exceptional athleticism are only rarely able to coach, especially teaching someone who is a little coordination challenge.

She has written four books on the subject of casting and co-authored the biography of her husband. Also, she is in the International Game Fish Association Hall of Fame and American Casting Association Hall of Fame and has more than two dozen awards, including the Lapis Lazuli and Lifetime Achievement awards from the International Federation of Fly Fishers.

To read more about the upcoming movies go to Marshal Cutchin’s coverage . . .