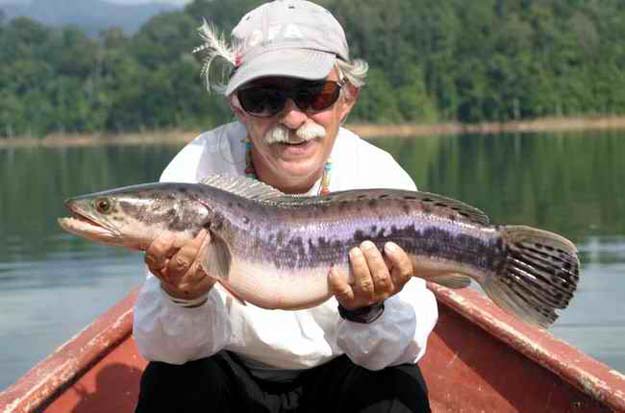 It turns out it’s not frankenfish

Snakes in the Grass

[dropcap]T[/dropcap]hey were called “frankenfish” and “fishzilla,” as if they were created in the laboratory of a mad scientist. They even morphed into a mythological creature that could walk across dry land and survive out of water for days. The hysteria around snakeheads also spawned a rash of B-list movies. One included gruesome attacks by roving packs of six-foot fish that devoured swimmers, crashed boats, and slithered into lakeside cabins to gnaw on helpless teenagers.

Snakeheads are not the result of a freak experiment. They are nothing more than a fish native to Asia that somehow made its way into the tidal Potomac River more than a decade ago Fisheries Biologist, John Odenkirk, with the Department of Game and Inland Fisheries with a nice, ready to be tagged snakehead. The International Game Fish Association (IGFA) world record All Tackle is 52lb, 15oz (Thailand) – 2013, and Fly Fishing is 14lb, 1oz (12-pound tippet). 2010.

As it turns out, snakeheads can indeed wriggle across the ground for short distances. They can even live out of water for several days, thanks to their ability to breathe air, but they must be kept moist. They don’t attack swimmers, however, and they certainly won’t crawl into a house to eat children or pets.

Even better, snakeheads are not the ecological disaster many fisheries biologists feared, at least not in the Potomac. One early study suggested the river’s bass population would decline by one-third if snakehead numbers were not controlled. There’s no question they prey on juvenile largemouth bass and other young game fish, but after more than a decade of research, snakeheads, it turns out, are just another fish.

“They seem to have reached an equilibrium with the other fish in the river and they occupy a niche that was largely unfilled,” says Regional Fisheries Biologist John Odenkirk, with the Department (DGIF). “The Potomac is a very fertile river. There seems to be plenty of food to go around, even with the addition of this new species.

“We’ve found 20 or 25 different items in their stomachs, which means they just eat what’s available at the time. Killifish, white perch, baby bluegills, crayfish, mice, whatever happens, to be in front of them. They even eat their own young.”

“Snakeheads stay close to the surface much of the spring and summer, frogs are ideal artificial baits. Besides, who doesn’t love the sight of a big fish exploding on a topwater lure or fly?” (Chaconas)

Because of those heart-stopping, lure-crushing strikes, the powerful runs, their voracious appetite and varied diet, snakeheads have turned into a bucket-list fish for a growing number of anglers throughout Virginia and the mid-Atlantic region. The good news is that snakeheads are not only abundant in parts of the Potomac, they are relatively easy to catch, says Potomac River guide, Steve Chaconas. Make that, they are relatively easy to hook. Getting one to a net, however, isn’t necessarily turnkey.

“They have sharp teeth, so they can cut line pretty easily,” says Chaconas. “They are also incredibly strong and they are very good at burying themselves in the grass and other covers. I use some pretty heavy tackle and 60-pound braided fishing line, which is more difficult to cut and it has less stretch than monofilament. You need to make long casts, which means it can be harder to get a good hook set if you use monofilament.”

NOTE 1: Featured Image is of Marty Arostegui with a snakehead caught in Thailand on a fly (see hat). Marty, a retired South Florida Doctor, holds more IGFA records than anyone.

NOTE 2: This article originally appeared in the May/June 2017 issue of Virginia Wildlife magazine. The author of this article, David Hart, is a full-time freelance writer and photographer from Rice. He is a regular contributor to numerous national hunting and fishing magazines. Contact him at hartfish1@gmail.com