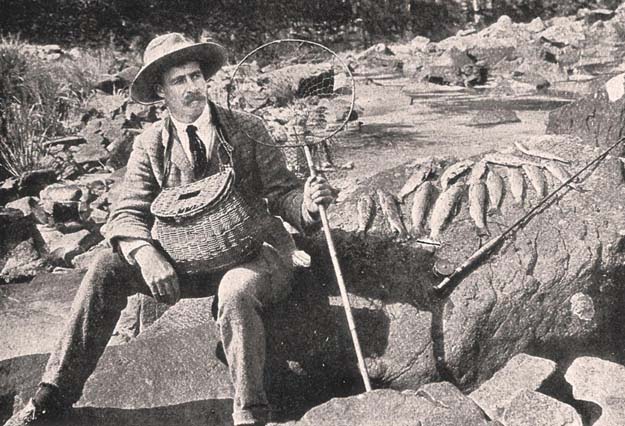 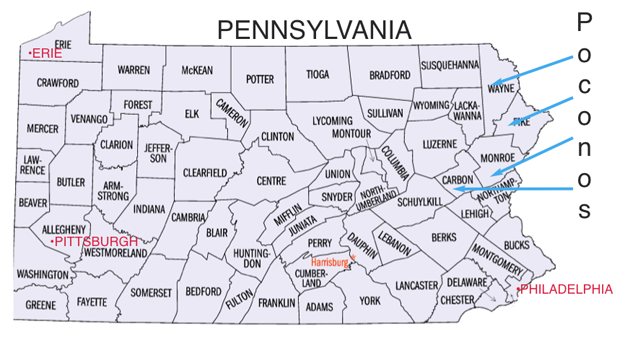 The counties highlighted are rural and unremarkable when passing through. However, contact any of the three fly shops in the area, get a guide, and you’ll be in for a great angling treat of another kind.

The Poconos are less than 100 miles from New York City:

The Poconos are a series of flat-topped mountains that reach 1,400 to 1,800 feet in elevation. They trend southwest to northeast and link up with the Catskill Mountains to the northeast. Hard sandstones and conglomerates in the Poconos have resisted erosion and thus kept the mountains raised above the surrounding lowlands, forming a heavily forested plateau that is flat to hilly in character. The plateau’s southern and eastern edge drops abruptly to the lowlands and is specifically known as the Pocono Mountains. This escarpment, with its relatively cool climate and the scenic beauty of its forests, lakes, and streams, has long been the site of many resort facilities for tourists in both summer and winter. It has been a trout haven for anglers since the mid-1800s. Dick Vitale.

Like New York’s Catskills and Adirondacks to the north, the Poconos are steeped in the tradition of trout fishing

One of the godfathers of fly fishing, Thaddeus Norris (1811-1877), frequently fished the Poconos Brodhead Creek, commenting: “ . . . Born in a rift of the Pocono Mountains, and hustles gaily over millions of rocks and down lovely valleys, an ideal trout stream for thirty-five miles, until it joins the Delaware River at the Water Gap.” 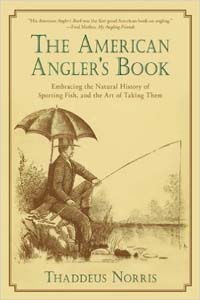 Click on the cover to read more about the book or to buy it (Amazon Books).

He is considered the most important American angling writer of his generation. His seminal work, The American Angler’s Book, came out in 1864 and was very successful.

There are other claimants to American fly angling’s origin as well. Doug Vitale wrote: “While angling literature has anointed the Beaverkill and its sister streams in the Catskills as the cradle of American fly fishing, Ernest Schwiebert‘s work challenges that theory and puts that moniker on the Poconos’ Brodhead Creek. Theodore Gordon was another early pioneer who fished the Brodhead, and Gordon and Thaddeus Norris have long been considered the fathers of American fly fishing. They both loved the Brodhead, although they, like many other anglers, did move on to the Catskills as the fishing on the Brodhead began to decline in the late 1800s.”

Fly fishing and time-off are much the same today:

Thaddeus Norris wrote: “Where can I enjoy trout fishing amid good scenery and good cheer without its necessitating a lengthy absence from the city? That is a question which frequently rises in the mind of the toilers in the busy centers of the East, and it is one becoming daily more difficult to answer… All that is necessary is to take the railroad, which conveys you to Cresco, in Monroe County, Pennsylvania, and a ride or drive of five miles through the Pocono Mountains will land you in the little village of Canadensis, in the valley of the Brodhead; and within the radius of a few miles on either side fully a dozen other unposted streams ripple along in their natural state, not boarded, bridged, dammed or fenced by the hand of man, thanks to the naturally uncultivatable condition of the greater part of this paradise for trout fishers.” 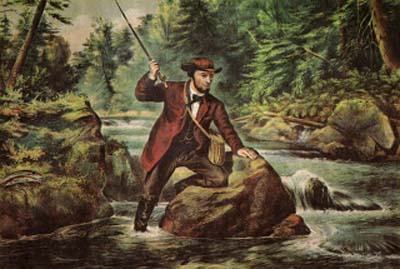 “I spent a day (on the Bushkill River) with friends one season, and we caught in less than two hours, in the liveliest possible manner, all the trout five of us could eat throughout the day, and four dozen extra-large ones which we took home to send to friends in the city.” Mr. Norris’ actions, which were surely repeated by him and others, contributed the demise of trout fishing in the entire Poconos. Photo of Arthur Tait / Currier & Ives.

Deforestation, Irresponsible Extraction, and Pollution Destroy Much More Than  a Fishery

The real damage was uncontrolled pollution caused by extraction and manufacturing processes. Doug Vitale wrote: “ . . . The toll on the region’s brook trout population.  . . . Combined with logging, tanning, and iron ore operations contributed to the demise of this species (trouts).

The real damage was uncontrolled pollution caused by extraction and manufacturing processing. Doug Vitale wrote: “ . . . The toll on the region’s brook trout population.  . . . Combined with logging, tanning, and iron ore operations contributed to the demise of this species (trouts).

By the late 1800s, the hemlock forests in the Pocono region were devastated. Without the shade provided by the forests, the waters warmed, putting additional stress on native trout populations. Eventually, the deadly combination all but wiped out the Brodhead river’s native brook trout.”

Today, the demise of fishing and hunting habitat is more subtle. Witness the Public Land struggle: When thieves come knocking, the fake news/misinformation outlets like the American Lands Council, and American Legislative Exchange Council, get into action and use extreme right-wing faux news outlets to put their spin on it. They prey on those who have been convinced our government is all bad, influencing the unsuspecting by using lethal propaganda. They are so good at the misinformation that good people end up voting against their interests.

And we repeat what happened 200 years ago.

The end game goes like this; transfer land to the states, the states cannot possibly pay for upkeep and budgets get messy, so they sell it to guess who. Think who set this all up? Mining extractors, timber interest, developers, and private, no trespassing, ownership.

Click on image to visit one of America’s top watercolorists’ studio/website – Thom Glace.

While much of the classic trout water in the Pocono Mountains is controlled by private clubs or individuals, there is still ample opportunity to experience good fishing, and streams are available to suit every taste.

NOTE: Featured Image by Call of the Stream. Most of this 1920s brown trout catch is probably scheduled for the dumpster. There are not too many barbarians still killing for the boast.  Perhaps only the Louisiana Hell Divers fit the description. However, our Conservation Editor who lives in NOLA says many of them have manned-up – matured and no longer kill tarpon for the boast of it.