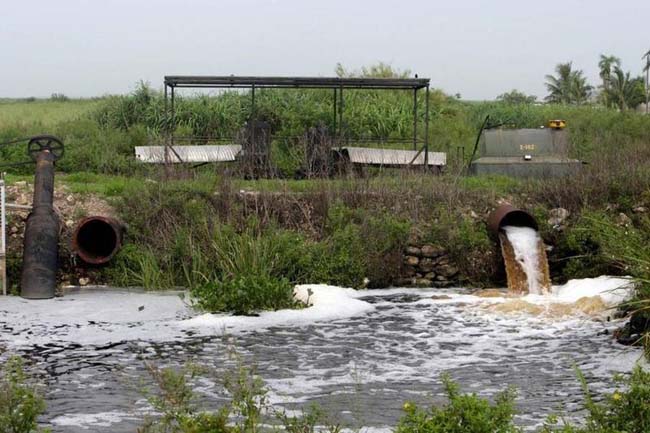 NOTE: See video credit information at the bottom on this page regarding The Weather Channel Documentary Films.

Don’t panic. Don’t swim in it. Don’t eat anything that does

[dropcap]M[/dropcap]edical researchers who study cyanobacteria and its human health impacts delivered clear, candid advice to a live audience this week (July 15th) in Stuart, Florida. But that advice contradicted much of what the public is being told about Florida’s toxic algae blooms.

The University of Miami’s Dr. Larry Brand and the Institute for EthnoMedicine’s Dr. James Metcalf were featured in the documentary Toxic Puzzle, which was screened before their panel discussion with Florida Oceanographic Society’s Mark Perry and former Martin County Commissioner Maggy Hurchalla. (Watch the full discussion) The film traces the connections between exposure to toxic algae and increased risks of ALS, Alzheimer’s Disease, and Parkinson’s Disease, linked to a toxin called BMAA that some blooms produce.

There is no commercially available test for BMAA–Florida health officials don’t screen for it. Panelists agreed that toxic algae blooms on Lake Okeechobee and the Caloosahatchee and St. Lucie Rivers probably produce BMAA. Dr. Brand confirmed that fish samples from the Caloosahatchee contained high concentrations of the toxin, which was linked to an explosion of ALS and related diseases in Guam, attributed there to eating contaminated bats. Brand has also seen crabs and shrimp in Biscayne Bay with double the BMAA concentrations of those bats.

Panelists emphasized that exposure does not necessarily mean you will come down with a fatal neurological disease. Thank goodness for that – go ahead kids, jump in

Swimming or even breathing near toxic algae blooms can expose you to BMAA, but panelists emphasized that exposure does not  mean you will come down with a fatal neurological disease. Research suggests it increases your risks, though–potentially by a lot. ALS typically affects 1-in-50,000 people; in Guam, diagnoses of ALS and related diseases in people who ate BMAA-contaminated bats was 200 times higher than that. And when the bat population was wiped out, the diagnoses plummeted. (Read more on the study).

Other cyanotoxins found in Florida water pose serious health risks, too. The species of microcystis (Microcystis aeruginosa) identified in samples in the lake, and both estuaries produce a toxin known to cause gastrointestinal and respiratory problems as well as liver damage. It has also been linked to heightened risk of terminal liver failure and liver cancer. Experts agree that any M.aeruginosa bloom should be considered toxic, and should be avoided. Again, no swimming, no eating fish, and if possible stay away from the area altogether to keep from breathing the toxin, which can become airborne.

Florida DEP downplays the risk, calling algae blooms easy to see and avoid. That isn’t true. One of the toxins the DEP tests for, cylindrospermopsin, isn’t associated with visible surface scums like microcystins. Even Microcystis can mix-in, sink, or rise in the water column. Brand showed the audience a sample from Clewiston, bright green when shaken, almost clear at the bottom half-an-hour later. Testing the clearer water would have proved far lower levels of microcystin than the top, even inches away. But the risk would still be high enough to warn people away from it. Before and After: How Sample Location Can Change Toxicity
Results.

So is the water safe? Dr. Metcalf put it this way: “Get a hundred cyanotoxin experts and ask who wants to go swimming in Lake Okeechobee. You won’t get any takers.”

It’s not. Even Florida DEP’s tepid warnings make that clear, and telling people otherwise is putting their lives in jeopardy. Medical science and government agencies around the world leave no room for doubt that toxic algae carry near-term health risks, which can be severe, even for people breathing near the water. Extensive research points to long-term risks, including terminal diseases with no known cure.

“Panic doesn’t solve anything,” said Metcalf. But Florida needs a solution. Right now, keeping toxic algae away from people should be a top priority–equal to guarding against the breach of Lake Okeechobee’s dike. Nothing should be more critical in the management of this system. The days of storing extra water in the lake and hoping against rain and toxic algae should be over.

In the future giving water managers the ability to send water south instead of into riverside communities–and to clean that water before reconnecting it to the Everglades–is the key to a long-term solution. So is cutting off the nutrients feeding toxic blooms on the lake and in the rivers.

Until then, experts aren’t telling Floridians to leave. As Hurchalla said, toxic algae isn’t a Florida problem: From Toledo, to Kansas, to California the impacts of cyanotoxins are making headlines. But the risks are real and the more we learn, the more urgent it becomes to manage them, and the more apparent it becomes that our government isn’t doing enough to protect us.

P.S. If you can, please become a Bullsugar.org member today to help us find and report an expert analysis of Florida’s water management crisis.

Feature Image: In 1992, Florida agreed to settle a lawsuit over polluted water flowing from farm fields, like this sugar field photographed in 2008, in a consent decree that called for the state to clean up the water. Go there today, over a quarter century later, and only the plumbing has changed. Charles Trainor, Jr., Miami Herald.

Over the past three years, the company has garnered nearly 50 awards for its reporting, including an Emmy Award, the Investigative Reporters and Editors (IRE) medal, a George Polk Award and Society of Professional Journalists (SPJ) awards.