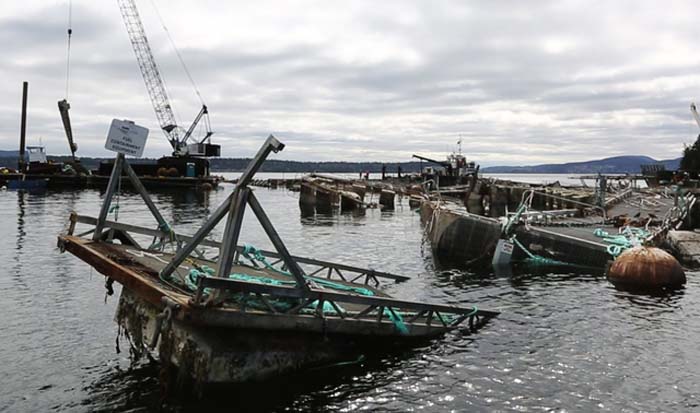 [dropcap]O[/dropcap]n Thursday, March 22, Washington Governor Jay Inslee signed HB2957 into law, an act that will effectively ban the practice of open-water Atlantic salmon aquaculture in the state of Washington.

“This is a huge win for the public and an even greater win for wild fish. Both myself and the thousands of supporting members of the Our Sound, Our Salmon campaign are grateful to the legislature and Governor for protecting our wild salmon from the needless risk posed by this industry.” — Kurt Beardslee, Executive Director, Wild Fish Conservancy

There is very little doubt that public support was the primary motivating factor behind the passage of HB2957. This year lawmakers expressed that they heard more from their constituents on the Atlantic salmon net pen issue than any other, and many members of both the House and Senate changed their stance on the issue over the course of the session, having considered the concerns of their constituents.

We find it heartening that a measure to protect wild fish, marine mammals, and coastal communities was passed in large part due to the outspoken voices of concerned citizens, the very citizens to which our public waters belong.

We urge Governor Inslee, the Washington State Legislature, and Washington state agencies to stand firm and ensure the phase out outlined in HB 2957 is dutifully executed in the years to come, and to actively mitigate the known risks associated with Atlantic salmon net pens while they continue to operate in Puget Sound.

We also insist that the study associated with HB2957 be conducted in an independent and objective manner. The Our Sound, Our Salmon coalition maintains that previously established research demonstrates a sufficient level of harm from Atlantic salmon aquaculture to warrant the expulsion of the industry from public waters. Nevertheless, the coalition welcomes further research into the issue, especially if that research is conducted in an independent manner with the goal of mitigating unknown risks prior to the completion of phase out.