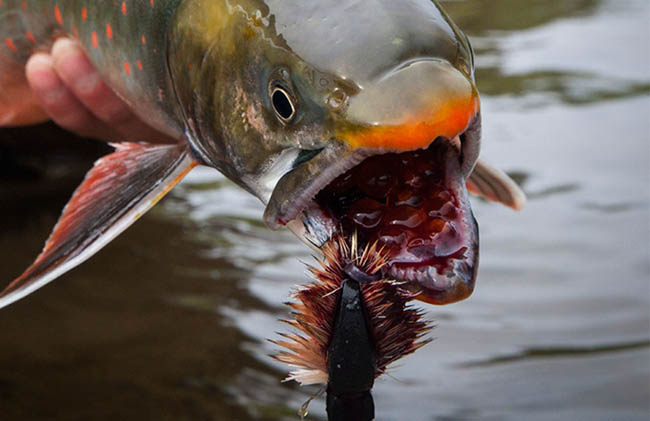 Mousing Trout, They Too Prefer Ribeye Over Toast Points

A 19-inch rainbow trout caught in Alaska’s Kanektok River, within the Togiak National Wildlife Refuge, was found to contain nearly 20 shrews in August 2009. Credit: Alaska Department of Fish and Game.

[dropcap]I[/dropcap]n the late 1970s, there were not too many more than a dozen full-service fishing lodges in all of Alaska. Fishing camps – lots of them. I booked a week at the now storied Rainbow King Lodge (Iliamna watershed), advertised then as a fly-out lodge. I made arrangements for my Alaska adventure through the fledgling outdoor travel company, Frontiers out of Pittsburgh, Pennsylvania. It, too, has become an industry icon.

I was in Alaska early in June for the first up of the five salmon runs the state is known for. The first itinerant is the King salmon or Chinook salmon (Oncorhynchus tshawytscha). It arrives at some coordinates in June and hits a peak in July and runs into a tail end in August at other compass points.

Younger men like to catch big animals. Kings are the tarpon class of Pacific salmons, but the acrobats are late arriving coho

My remembrance was that I had two Sage RPL rods – breakthrough fly rods in the late 70’s and their offspring had a superiority lasting well into the 80’s. Sage, with their RPLs, tamed graphite – putting it into new performance standards that were rapidly met by industry opponents. The fly lines were double taper and the leader monofilament. Today, the fly rod leaderboard has the same decades-old names with additions like Echo, TFO, and a handful of regional producers like Rise Fishing Company. The fly lines playlist is now also a lineup of familiar names: Rio Products, Airflo, Cortland, Scientific Anglers (Orvis), and a few others. All are adding measurably to fly rod performance in a way never dreamed of in its 70s role.”

After the second day at Rainbow King Lodge, it became clear to all in the camp that the first run of kings hadn’t happened. Twelve anglers had managed two kings in all day power boat runs averaging nine-hour days for two days straight.

To salvage a fishing trip, it was time to pursue rainbows and Dolly Varden, and rodents were not in the playbook, but fly-outs were.

I was to quickly learn that both rainbow and Dolly Varden yielded to mice, voles, shrews or whatever they were, and did so in a big way. As it turns out, it’s a straightforward solution. Who wants toast points when ribeyes are on the menu?

What I learned in Alaska about mousing and what I subsequently learned about mousing is the playbook for today, and as it has been for decades. Trout, char, and freshwater bass love their “evening” entree to be rodent al dente. The significant changes are the gear, tying materials and resulting tying techniques, but deer hair is still the go-to material for most.

So, how does one mouse a trout?

I didn’t learn all mousing tricks on my own. Only a few things were self-taught. A Swiss orthopedic surgeon tutored me through a mousing degree during that first Alaskan happenin’, and as expected, professional Alaskan guides, western US guides, Canadian guides, and South American guides fitted me out the rest of my rodent enlightenment way over the years.

My roommate and boat mate

My fishing partner on my initiation to Alaskan fly fishing was a very experienced fly fisher and well-traveled. His name Hans Weiss, M.D. from Stein-am-Rhein, Switzerland, a border town to Germany. We shared a room, ate together and talked fishing, shared flies, and fished together for five days. His two boxes of “maus” (mouse) fly fascinated me. He said he liked to fish rodents for trout within the Europe he knew. I thought nothing of it.

Our “guide,” Paul turned out to be a boat driver with little interest in us or fishing. He was a University of Michigan forestry student more interested in Alaskan flora and the sous chef, Arlene, from the University of Chicago. He was a good boat driver, oarsman when called on, map reader, shore lunch guy, and reliable. Our prearranged third morning was a flyout made up of a guide/pilot, another guest angler, Hans, Paul and me. We flew for almost an hour in a STOL (Short Take Off and Landing) aircraft which seemed to fly at only highway speeds. We landed on a hardpacked sand river bend (river name escapes me) on a piece of real estate no bigger than a handkerchief, Hans commented.

While we were waiting for Paul to retrieve our skiff, we gave Chinook a chance but only saw a few very fresh animals – getting passerby looks, but no bites.

We moved off the river to a barely navigable stream leading to a big lake. When we could motor, as opposed to rowing or portaging, we fished the banks and managed some respectable rainbows and a few larger dollies, but mostly memorably forgettable fish for Alaska. No sign of Doc’s mouse flies.

After an early lunch at the entrance to the lake, Doc Weiss and I chatted fly patterns and chugged some earned cold beer. He encouraged me to try a mouse – offering me a few different “models” to work.

Shoreside, while Paul was cleaning up from shore lunch and Doc was napping, I started fishing at the mouth of the noname stream where it met the noname lake.

Negotiating was easy, a smoothed out, spongy animal track path, elevated above the water about 4- or 5-feet, made for an  unencumbered trek. The path was worn down to about 2-feet deep and guarded on each side by stunted trees and interruptions of bare spots on the riverside. There were low bushes randomly growing on a narrow beach of gravel below. The gravel was like quicksand, and the river at that point was too deep to jump down and wade.

When I hit a big, open stretch, I planned on the Englishman’s Atlantic salmon method of fishing I’d seen in Iceland – one cast and move on. Of course, I wasn’t going to cover Spey like casting real estate.

On my first cast, I landed a Hans mouse in a water’s edge bush. A gentle tug swung the fly free and onto the gravel bed. Fearing the fly and leader getting hung up again, I snake roped shook it off the gravel, and it plopped into the water skewed upside down. Before I could right it, an enormous dolly rocketed the mouse skyward, and itself entirely out of the water – an orca bangs a seal replay. The sound of the explosion greater than the racing and tumbling water of the stream.

The dolly returned to get my stunned herbivore/insectivore (mouse, shrew, or vole), but my interpretation of a take was premature, and I pulled the mouse free. Though similar to, and often confused with, trout, Dolly Varden are actually a char (Salvelinus sp). To tell a char from a trout, look at their spots—char have light spots (white or yellow to red) on a dark body, while trout have dark spots (brown to black) on a light body. Image credit Alaska Department of Fish and Wildlife.

From about 20-yards away I could hear Hans laughing

Hans was my senior by many years, and in a stern, and inimitable Germanic way began his instructions on mousing which I’ve never forgotten:

1. That char or rainbow’s interest was not a lucky strike or a timid one, and it was not an unknown food source, and probably preferable until it moved from the lake and stream to the river in July for salmon eggs and even later in the season, salmon flesh. But the mouse would be in play all season long, just not as popular as in “this” early season.

2. The trout or char cannot inhale a “maus” like a dry fly or grab and swallow like most streamers. It has to stun it, or just wound it and then reposition it in its mouth to consume it. All of which is done in one motion.

3. A “maus” had to fall into the water or use it for passage. Either way, it is not anatomically built for being in the water – thus a lousy swimmer.

4. If the char/trout did not immediately attack the presentation, the retrieve was best done in one inch pulls and following a single path. Recast and use a stop and go retrieve, but do not recast close to the initial cast. A new cast of 10- to 20-feet away from the initial cast works well. The trout can see it.

5. The fly has to be built to push water and sit in the water, not be a surface floater or submerged. A mouse only uses it rear legs for propulsion; the front legs are “wheels up.”

There were more questions I’d ask Hans that week: Would the mouse hold interest for the trout everywhere? Yes, anywhere. What was the best leader system? Short. What was the best placement: midstream, close to the bank, or come off the bank like a lily pad for largemouth bass? Think of how a rodent would get into the water in the first place. What about setting the hook? Wait for the pull. What is best, up river or down river cast? Down. What about retrieves? Think about how a rodent propels itself. It disturbs the water because of its aquatic inabilities, and it will fight the current. A dolly in spawning dress. Image Alaska Department of Fish and Wildlife.

I realized that first experience was over excitement, I blundered. Correcting that would be the most beneficial of all the Doc Weiss tips

The “feel” of when to set a hook on a tarpon or trout wrestling for control of what it’s mouthing is impossible to translate into words, like explaining notes being played on a blues guitar or sung mezzo-soprano in an opera. Writers try, but come game time on the water; adjectives don’t translate into the right action – only having been-there-done-that catalogs feel.

Fishing the mouse in running water

The most productive way to mouse-a-trout would be to cover a lot of ground while moving. Yes, that means a water conveyance and an oars person or driver if motorized. The second way to mouse away a day is on foot – my favorite way. Again, a guide alongside is best. While you’re watching where you step in the water, he or she is watching the water, which is where the trout live.

Productive casting techniques in “running water,” for me, have been quartering downstream. High-sticking “the swing” with a “palsy-like” twitching of the mouse – hoping to imitate a reluctant and non-aquatic animal panic while attempting to swim to safety.

First, as stated before, the mouse patterns I use best swim to capture if partially submerged in the water – not high floating. Second, the mouse has to move as much water as possible; disturbance is the idea.

Mousing is better low light hours or at night in the continental US, but don’t try it in Alaska. Think of a bear hug you don’t want Distribution/Range: Throughout the Pacific Rim from southern California through the Gulf of Alaska to the Kamchatka Peninsula in Russia. There are two forms of Dolly Varden in Alaska, the northern form Dolly Varden can attain a much larger size than southern-form fish.

Range/Distribution: Statewide, especially in coastal areas, but also in streams of Interior Alaska and the Brooks Range.

What the Fish Know That a Green Angler Won’t

Weighing in on the topic of fly rods, reels, fly lines, leaders, knots, and best pattern is opinion, hearsay or worse, the wrong information. But since you didn’t ask, I won’t tell you what I think. Opinions are:

“Your opinion is pernicious and should be consigned to the flames.” – John Corvino