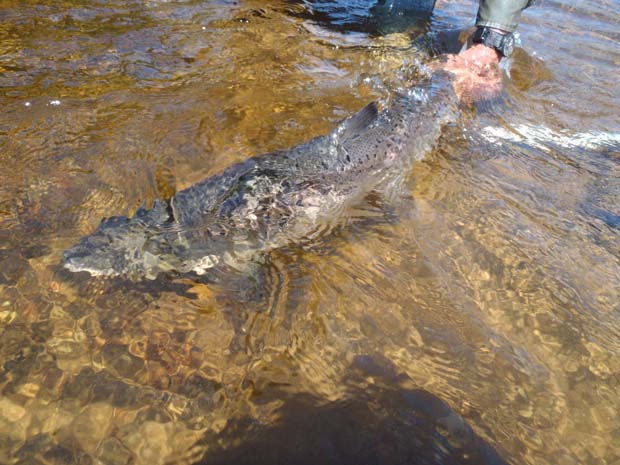 [dropcap]T[/dropcap]he Atlantic Salmon Federation (ASF) is once again putting New Brunswick’s Miramichi River in the spotlight, this time by paying tribute to the world-famous river in the winter issue of the organization’s award-winning, quarterly magazine the Atlantic Salmon Journal.

At the heart of the winter issue is an article called Voices From The Valley written by Martin Silverstone, the magazine’s editor. Silverstone wrote the article after travelling to the Miramichi in mid-October to speak with residents along the river and get an idea of the impact of the serious declines in salmon numbers that have been experienced, especially in the past three years.

“The Miramichi could be any river,” said Silverstone. “But of course it’s one of the biggest and the best, which is why we focused on it after the disappointing runs of 2014.”

“Those disappointing runs prompted ASF and the Miramichi Salmon Association (MSA) to make a public call in September on the Canadian government for immediate action to address the crisis facing the survival of wild Atlantic salmon. Silverstone says that behind the statistics of salmon run numbers and economics are the people and places that tend to be forgotten that make up the unique tapestry of the region. In his research, he spoke with seasoned fishing guides, members of First Nations, anglers and shop keepers.

“I found, not one Miramichi, but many,” he said. “Not only because of its myriad of tributaries, but also because the river is many things to many people. Canoeists, anglers, nature lovers, First Nations – they, as many others, are ready to sacrifice, support and sustain this river, but all they ask and need is a sign that government cares and that it is prepared to take action.”

According to a report by Gardner Pinfold Consultants, wild Atlantic salmon are worth $255 million. Atlantic salmon contributed a gross domestic product value of $150 million in 2010 relating to recreational and First Nation fishing, tourism, education and spending by governments, universities and non-government organizations. The species supports more than 3,800 jobs. In addition, the report estimated that Atlantic Canadians and Quebecers are willing to contribute tax dollars to support successful restoration programs that would cost up to $105 million annually to ensure that wild Atlantic salmon continue to exist and contribute to ecosystem integrity.

One of the four case study rivers in the Gardner Pinfold Report was the Miramichi, where they pegged annual spending related to wild Atlantic salmon at $20 million, supporting 637 jobs.

Silverstone says that, despite some hardships, the people working in and supported by salmon fishing along the Miramichi remain strong and optimistic.

“Everyone I met seemed to want to protect, not only the Miramichi and its salmon, but also each other,” said Silverstone. “People here have a great sense of humor and won’t hesitate to poke fun at friend or foe, but all are quick with a helping hand in time of need.”

About the Atlantic Salmon Federation

The Atlantic Salmon Federation is dedicated to the conservation, protection and restoration of wild Atlantic salmon and the ecosystems on which their well-being and survival depend. ASF has a network of seven regional councils (New Brunswick, Nova Scotia, Newfoundland and Labrador, Prince Edward Island, Quebec, Maine and Western New England). The regional councils cover the freshwater range of the Atlantic salmon in Canada and the United States.