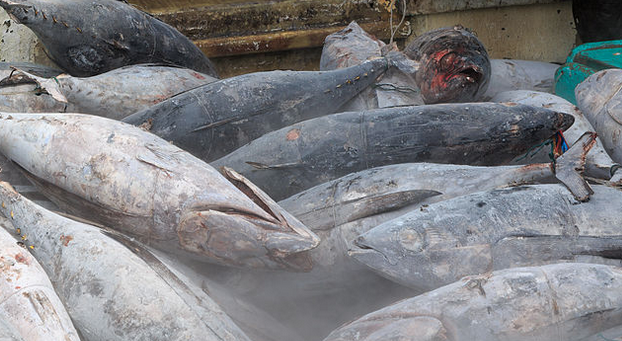 The Bahamian government is considering a joint venture that would grant Chinese commercial fishing vessels licenses to fish Bahamian waters.

The Bahamas government recently floated a proposal to give Chinese investors commercial fishing rights. Minister of Agriculture & Marine Resources, V. Alfred Gray authorized the Bahamas ambassador to China in writing to pursue talks with the Chinese. Gray’s letter was leaked and published in the Nassau Guardian. The Bahamian Embassy in China also produced a draft summary of the proposal for discussion purposes. The ambassador, Paul Gomez, broached the matter with the Bahamas National Trust (BNT) and the Bahamas Reef Environmental Education Foundation (BREEF) at an event this past October. Pelagic Species will be at high risk if Chinese commercial fishing is permitted.  Photo by CEphoto, Uwe Aranas.

The draft report prepared in July by the Bahamian Embassy in China calls for the creation of up to 100 partnerships with “the government of the People’s Republic of China or its substantial representatives.”

In return for $2.1 billion in working capital, equipment and expertise over a 10-year period, China would be able to lease up to 20,000 acres of Crown land and all the joint venture companies would receive commercial fishing licenses. Current Bahamian law prohibits foreigners or foreign-owned vessels from engaging in commercial fishing. A “Bahamian” fishing vessel must be “bona fide owned by a citizen of The Bahamas, (who is) resident in The Bahamas, or a company registered in The Bahamas in which all the shares are beneficially owned by citizens of The Bahamas resident in The Bahamas,” per the Bahamas Fisheries Act.

A public firestorm erupted when this proposal first became known shortly after the passage of Hurricane Matthew in early October. Since then, Gray has vigorously backpedaled and downplayed the deal. Initially he called the news reports “utterly false” and then said he had authorized a discussion, but there was nothing before the cabinet for approval. However, in November he suggested the proposal was still on the table and hoped the Chinese would not be deterred by widespread public criticism.