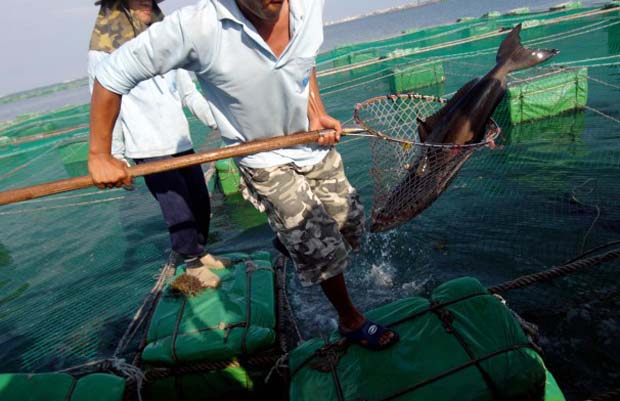 [dropcap]C[/dropcap]obia is a sleek and powerful fish that devours flesh and doesn’t apologize for it. Open its belly and anything might pop out — crab, squid, smaller fish, you name it. Sam Yeh/AFP/Getty Images – Fishermen catch a cobia at a fish farm off the coast of Penghu County, July 26, 2007.

Recently, three Baltimore researchers – Aaron Watson, Frederic Barrows and Allen Place — set out to tame this wild and hungry fish sometimes called black salmon. They didn’t want to simply domesticate it; hundreds of fish farmers have already done that. They sought to turn one of the ocean’s greediest carnivores into a vegetarian.

The researchers announced last week that they pulled off the feat at a laboratory in the Columbus Center in downtown Baltimore. Over the course of a four-year study, Watson said, they dabbled with mixtures of plant-based proteins, fatty acids and a powerful amino acid-like substance found in energy drinks until they came up with a combination that cobia and another popular farm fish, gilt-head bream, gobbled down.

The conversion of these carnivorous fish to a completely vegetarian diet is a first, according to the University of Maryland Center for Environmental Science, and a key to breaking a cycle in which the ocean’s stocks of small fish – menhaden, anchovies and sardines — are plundered by industrial fishing partly to provide fish feed to aquaculture, one of the fastest-growing economic sectors in the world.

“It would take the pressure off harvesting the menhaden fishery,” Place said, referring to the bony and oily little fish billed as the most important in the sea. Menhaden, caught off Virginia’s coast, feed a plethora of marine animals, including dolphin, swordfish and birds.

The research was published in this month’s issue of the journal Lipids and is supported by a paper published earlier in the Journal of Fisheries and Aquaculture. It’s part of a race to replace feed from wild-caught fish as the diet of choice for farm-raised fish, set in motion by the National Oceanic and Atmospheric Administration and the Department of Agriculture in 2007.

Feeding both farm fish and more than a billion humans from wild fisheries is environmentally unsustainable, according to NOAA and just about every nonprofit conservation organization that monitors oceans.

Fearing that menhaden are severely overfished by an industry that sells it worldwide for oil, animal feed and sport-fishing bait, the Atlantic States Marine Fisheries Commission in December sharply reduced the amount that can be harvested.

Aquaculture was once thought to be a solution to overfishing in the world’s oceans, lakes and rivers. After the explosion in the human demand for seafood, the need to feed farm fish started depleting the stocks aquaculture was supposed to save.

But there is a way for people to have abundant fish and eat them, too, said Michael Rust, aquaculture research program manager at NOAA’s Northwest Fisheries Science Center.

“All fish – carnivore, herbivore, and omnivore – require about 40 nutrients in the correct ratio,” Rust was quoted as saying on NOAA’s Web site. “It doesn’t matter to the health of the fish where the nutrients come from. By incorporating marine algae, fish processing trimmings, and a variety of plant products, we can formulate high quality fish feeds without relying on wild-caught fish.”