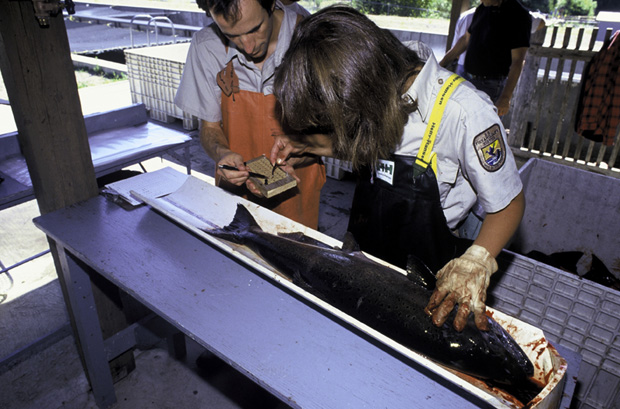 [dropcap]Q[/dropcap]uestions began surfacing about the agency’s reasons for planning to close these facilities, considering the FWS’s “FY 2014 Budget Request and Justification,” included in President Obama’s FY 2014 budget submitted to Congress on February 12, 2013. In this document the agency requested funding these facilities at the same level as in recent years, and no cuts   were mentioned. “The 2014 budget request for the National Fish Hatchery System Operations is $46,528,000 and 355 FTE, a net program change of -$172,000 and -3FTE from the 2012 Enacted,” said Rick Nehrling, a 38-year veteran of the FWS, with 19 years overseeing southeastern U.S. hatcheries, “This statement informs us that all hatcheries – including the mitigation hatcheries – are fully funded.” Seems someone in FWS has some explaining to do, and if some members of Congress have anything to say about it, it won’t be long.

THE HEAT IS ON

The current climate in Washington D.C. is heated, as both sides of the aisle clash over cutting spending to try to stem the runaway deficits. Both sides agree wasteful spending must be curtailed, but neither will agree throwing out the baby with the bathwater is a prudent idea. The 70 federal hatcheries support at least 3,500 jobs and have an annual economic impact of more than $325 million. These facilities lead to major economic advantages for the communities that house them, and are a beacon of sound government management. Besides the economic advantages, these provide the means to fulfill President Barak H. Obama’s “2012 Great Outdoors Initiative,” designed to increase and enhance outdoor recreation. Yesterday (Sept. 11), Senators Lamar Alexander (R-TN), Mark Pryor (D-AR), John Boozman (R-AR) – along with House members Rick Crawford, Doug Collins, Tom Cotton, Tim Griffin, Phil Roe and Steve Womack – sent a letter to Department of the Interior Director Sally Jewell requesting for a 60-day delay in the implementation of any recommendations for closure of any national fish hatcheries or other plans, so the public could review them.