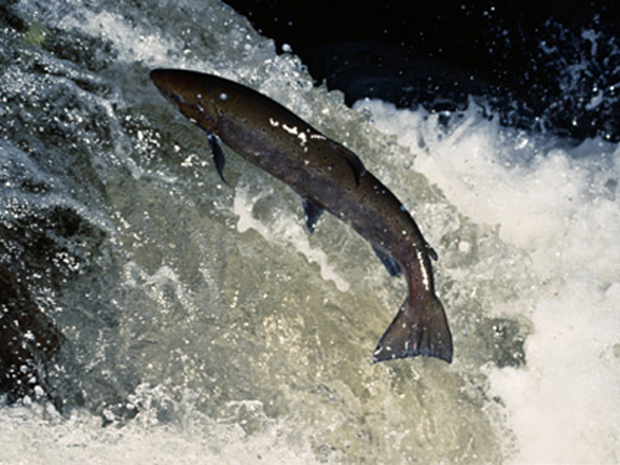 [dropcap]S[/dropcap]t. Andrews, New Brunswick – Biologists with the Atlantic Salmon Federation (ASF) are concerned  that the large number of  farmed  salmon showing up at a fish trap on the Magaguadavic River in New Brunswick is indicative of a large escape of farmed  salmon.  Escapes from sea cages in the Bay of Fundy that have gone unreported by the aquaculture industry are very likely entering other Bay of Fundy and Gulf of Maine rivers. In most  Bay of Fundy and Gulf of Maine rivers, there is no trap to prevent farmed salmon escapees from entering these rivers. Some of the escapees are sexually mature and the timing of this latest incident coincides with the wild salmon spawning season, which increases the likelihood and severity of negative interactions between wild and farmed fish.  When farmed and wild salmon interbreed, the progeny are less fit to survive and are less likely to produce healthy offspring themselves. Salmon farming has been identified by the Committee on the Status of Endangered Wildlife in Canada as a significant threat to endangered wild salmon.

“This is a serious issue,” said Jonathan Carr, ASF’s Director of Research and Environment.  “It is mandatory in New Brunswick for industry to report incidents of escapes of 100 salmon or more. Our monitoring program on the Magaguadavic provides an early warning system for the salmon rivers in the region,” said Mr. Carr.  “For instance, when previous escapes have been reported to Maine officials, they have set fences or traps in specific rivers to try to stop the infiltration of the escapes into those systems.  These methods should also be adopted in Canada. Keeping these escaped salmon from interacting with endangered wild salmon in th e Gulf of Maine and Bay of Fundy is fundamental to the recovery of wild Atlantic salmon populations.”

“The problem is that reporting escape events is self-regulated by the Canadian industry,” said Carr. “ If they don’t report it, then we usually don’t know about it unless there is a monitoring station in place such as on the Magaguadavic River.”

In Maine’s industry, escaped farmed salmon can be traced back to the sea cage operator responsible using DNA technology.    “This helps to keep the industry honest,” said Carr.

Carr says he has counted a total of 89 farmed salmon this season, 70 in the past few weeks, at the  Magaguadavic fish trap, the largest number of escapees encountered since 2001.  He says this number of escapees entering one river indicates a large escape of tens of thousands of salmon from ocean sea cages.   Following a reported escape from Cooke Aquaculture operations in 2005 of 50,000 farmed salmon, only 30 salmon were counted at the Magaguadavic fish way.

“How many other escaped farmed fish are entering other rivers?” questioned Carr.  “We have no idea because there is no comprehensive monitoring program in New Brunswick, despite salmon being farmed in the Bay of Fundy at some of the highest densities in the world.”

This most recent unreported escape highlights the need for better containment of farmed salmon, as well as regulatory development and increased enforcement of existing provincial and federal regulations in Canada. ASF has long called for more transparency and accountability within the aquaculture industry, which will depend on stricter regulations by provincial and federal governments.

The Atlantic Salmon Federation is dedicated to the conservation, protection and restoration of wild Atlantic salmon and the ecosystems on which their well-being and survival depend.  ASF has a network of seven regional councils (New Brunswick, Nova Scotia, Newfoundland and Labrador, Prince Edward Island, Quebec, Maine and Western New England).  The regional councils cover the freshwater range of the Atlantic salmon in Canada and the United States.