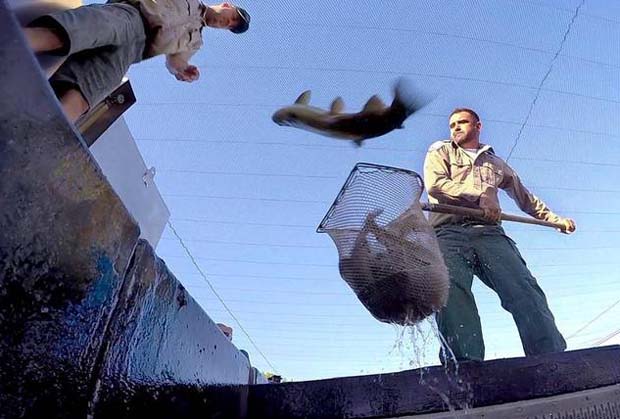 [dropcap]W[/dropcap]ith a fourth year of extreme drought conditions reducing the cold water supply available, the California Department of Fish and Wildlife (CDFW) is moving fish out of the San Joaquin Hatchery near Fresno for the first time.

The water level at Millerton Lake, which supplies water for the hatchery, is so low that the temperature is not cold enough for the hatchery fish to survive.  Workers have been evacuating the hatchery-raised rainbow trout, some of which are as large as 3 pounds, into lakes in Fresno, Kern, Tulare and Tuolumne counties for more than two weeks. The fish planting process should be completed within the next few days. “Our water is just too warm to raise trout here, and if we don’t move them, they won’t survive,” said CDFW Fisheries Program Manager Dean Marston. “If there is an upside to this situation, it’s that the public will have an opportunity to catch some really nice trout.”

CDFW has been stocking rainbow and brown trout from other state hatcheries, including the American River Hatchery in Sacramento and Kern River Hatchery near Bakersfield, into state waters earlier than normal. Many of these are catchable-size trout, in addition to some fingerlings and smaller fish. By increasing planting frequency and the number of fish planted, CDFW can somewhat offset the natural decline in fishing opportunity as water temperatures in many geographic locations become unsuitable. The accelerated planting schedule will continue until the end of summer when all the fish in the raceways are expected to be evacuated.

Fall and winter rains, if received in sufficient amounts, will cool water temperatures enough to allow hatcheries to come back online and resume operations.