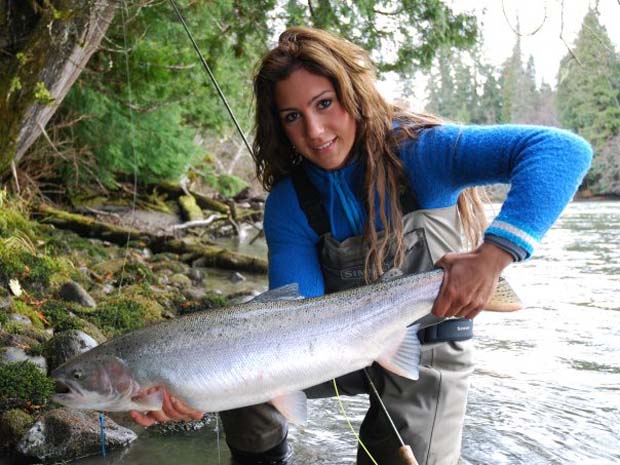 News: Famous Dean getting short on salmon and steelies

April Vokey, cover girl, fishing guide, columnist and outspoken conservationist lets the Canadian Department of  Fisheries and Oceans (DFO) bureaucrats have it. The purse seiners are killing off salmon and steelhead stocks at an alarming rate. Steve Morrow, Jeff Vermillion, Scott Baker-Mcgarva and other guides and spokespeople in the region are asking everyone who has experienced the Dean River to write DFO representatives with urgent requests to halt the commercial fishery practices.

[dropcap]F[/dropcap]or those of you included in this email who I don’t already know personally, my name is April Vokey and I am a British Columbia resident, steelhead guide, published columnist, occasional television personality and active conservationist.  I have included you in this email chain because I consider you an influential person who I feel I can trust to help with this matter…
As a full time fly-fishing guide on the Dean River off the coast of Bella Coola, I spend two and a half months a year on the river seven days a week.

With this being my fourth full-time season on the Dean, I have had the good fortune of being a firsthand witness to the salmon and steelhead returns during the peak months of June, July and August.

This year we have noticed a significant decline in the returns of all species in the Dean and the Dean channel.
On a good year, pink and chum salmon flood our waters, spawning in side channels, rolling at our feet and, of course, taking our flies.  This year the Dean stays quiet, nearly devoid of life and seemingly empty of both salmon and steelhead.

Even the bay in which our lodge rests has few spawning chum salmon in it and there is no mistaking the astronomical difference compared to years past.

The bears seek food in the shoreline and their scraggly bodies show that the outcome is affecting more than just the sportsmen.
This season, the Dean Channel has seen 21 commercial netting openings since June and has all four lodges, lodge guests and all camping anglers concerned about the confusing and non sustainable openings in Area 8, specifically region 8.8 (explain where that is and why).

It is with my sincerest of concern that I write to you about this urgent and severe matter as it is a time sensitive issue that has been bullied and aggressively pushed by the DFO for years.

April Vokey on the Dean. 100 purse seiners in the Dean Channel can do whatever they want – violating regs.

An opening in this already barren waterway was approved today and it is with the utmost importance that we seek aid in drawing the attention of our government to the delicate balance of this fishery.  I have included an accurate response to this problem below and I hope it will enlighten you on just how badly this situation needs your aid.

Worries for our very near September returns of coho salmon soar high and with our backbone and hands-on field observations, we are asking for your help where you may lend it.  The direct email to the government official in this matter is Danny.Wagner@dfo-mpo.gc.ca though we are looking for larger media awareness at this time.