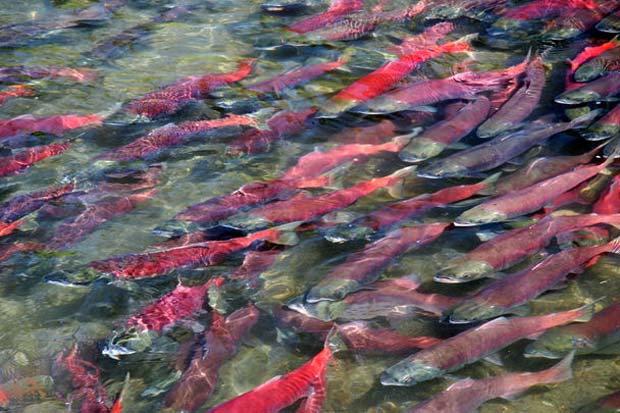 Fly Rod & Reel’s Zack Matthews does brilliant job of examining the big picture and explaining what was, and still is at stake in Alaska’s Bristol Bay. And he brings to light the greed of Canada’s Northern Dynasty Minerals, the incredible effort of so many concerned outdoors folks and the remarkable effort of one a man named Scott Ned [dropcap]T[/dropcap]he pr people had a tough task ahead of them. Their bosses—an international multi-billion-dollar syndicate, headed up by a Canadian mining company called Northern Dynasty Minerals—wanted to start digging on a new project. A huge copper, gold and molybdenum deposit the size of an eastern seaboard state had been discovered in a remote, largely uninhabited stretch of southwest Alaskan tundra, owned by the State of Alaska itself. To mining executives, the Bristol Bay region looked like low-hanging fruit. The deposits at the proposed Pebble Mine site—first identified by aircraft, then by more than 1,000 drill hole tests—were very low-grade, but there was enough ore in the ground to keep a mine operating for up to a century. The total estimated value of the metals was stratospheric: more than $300 billion at 2010 exchange rates.

Although actually mining the deposits would cost billions and would require the creation of a hole the size of a meteor strike (not to mention several toxic lakes to hold the mining sludge), the profits were expected to be gargantuan and the local regulators were known to be permissive. Best of all, the only apparent obstacles were some local Native American groups and a few fish. History had shown that nobody cared much about either of them. In other words, it looked like a slam dunk. All the PR department needed to do was keep people focused on the positive: Gold! Jobs! Regional prosperity! Meanwhile, they would need to divert attention from a few—totally minor, easily forgiven—negatives, such as the fact that the shores of Bristol Bay would wind up resembling the Land of Mordor if the project went forward. The fish could all die, too, but if you want to make an omelet, hey, you have to break a few eggs. The mining executives fired up the lobbying machine and started the permitting process. And that’s when Scott Hed’s phone rang.

Hed (rhymes with “played”) was a conservation organizer employed by an organization called the Alaska Conservation Foundation. After a 10-year career in finance, he had done a career 180 after a serendipitous trip to the Last Frontier. He fell in love with Alaska. “My late mother,” he recalled, “said once you go to Alaska you never come all the way back. That was true for me.” When the phone call came, however, he and his bosses recognized that this would be a bigger fight than anything any single conservation organization had tackled by itself before. They would need allies: commercial fishermen, Native groups, recreational fishermen and hunters, all to develop the political capital necessary to divert a nearly unstoppable phalanx of gold-digging lobbyists and business interests. In addition to multi-billion-dollar international corporations, the State of itself was in support of the project. Frankly, any objective outsider would have put their chances of diverting the mine at slim to none, but Hed and his colleagues were undeterred. And so the Sportsman’s Alliance for Alaska was founded. Dedicated to bringing disparate hunting, fishing, Native and commercial interests together, the group was attempting something that had never been tried in conservation on this scale before. To understand the size of what this small, scrappy bunch of conservationists was up against, one need only consider the project itself. The “Pebble Mine,” as originally proposed by Northern Dynasty Minerals and its partners the Anglo-American (and later Rio Tinto) mining companies, was to be what is quasi-euphemistically termed an “open pit” mine. Here, the mining complex would cover 28 square miles,  with the open pit being approximately two miles wide. It would be 1,700 feet deep—roughly a third of a mile. “Pit” is, obviously, an understatement when one is discussing scouring out that much dirt. In terms of depth and width, its closest analogue would be the Grand Canyon. Because the ore itself had tested out as low-grade, it would need to be trucked out of the giant pockmark and over to a central processing facility, near the shores of Cook Inlet. There, the valuable metal could be separated from the dirt and valueless rock it was attached to. (The deposit dates to the time of the dinosaurs and is linked to Alaska’s strong volcanic activity, which thoroughly mixed the region’s geology, like Oreos in a blended milkshake). Once the valuable metals were freed from their rocky embrace with the earth, they could be shipped, via industrial barge, all over the world. The barges, of course, would have to dock somewhere, so a new harbor—a city, really—would be constructed where today salmon stage for their spawning run.