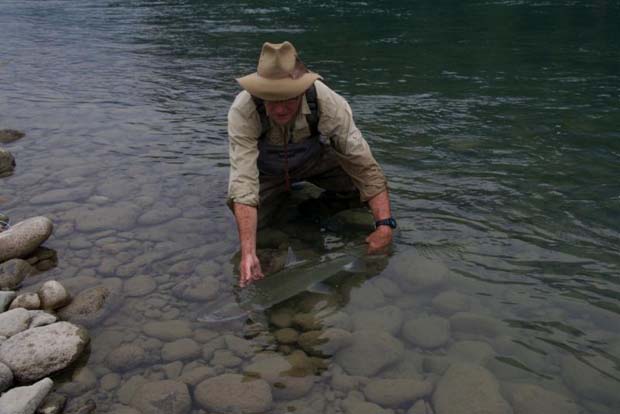 News: From the west – one man’s steelhead and salmon report

[dropcap]I[/dropcap] have just returned from wilderness steelhead camp, where, I am pleased to report, not a single fish I was fortunate to land was scarred by net marks. Last year on the Dean River, every fish I caught or watched others catch was scarred. Friends and other anglers reported the same. The cause, although denied by the Canadian Department of Fisheries and Oceans at the time, was pretty simple: a convergence of a much greater-than-normal fleet of commercial netters in the channel, targeting an artificially expanded hatchery chum salmon run homing to the Bella Coola River. The boats had been curtailed in other areas along the coast of British Columbia to limit harvest of diminished spawners. The nearly worthless hatchery chum brought pennies on the dollar at the dock–likely worth less than the diesel fuel burned to bring them in. Dean River steelhead paid the price.

This summer the extra boats stayed away. As you read this, many of these commercial netters are busy hauling in sockeye salmon from a huge run heading up the Fraser River. More than 20 million sockeye are coming home–not the remarkable 100-year record of 28.3 million four years ago, but still exciting. Not so encouraging is what this might mean for the beleaguered and beloved run of Thompson River steelhead. Historically, during years of robust salmon returns to the Fraser, as many as two of three returning adult steelhead have been intercepted by nets targeting salmon.

The Thompson is a large, fast, clear-water tributary to the immense and silty Fraser watershed. Its outsized steelhead are the strongest on the planet; drive along the pounding whitewater rapids they ascend and you’ll see why.

When I took my first cast here, more than 20 years ago, the annual run was depressed, but still averaged a couple thousand fish. In recent years considerably fewer than 1,000 spawners have appeared each fall in its sagebrush-lined runs. Some fear the run may be down to half that number. For those of us who care about these special steelhead, three important developments are worth noting. First, an extensive Independent Review of the Science and Management of Thompson River Steelhead has been financed by the Thompson River First Nations. It is excellent. The report provides an in-depth overview of the traditional steelhead fishery, what ails the population of these migratory high-desert fish, and proposals for restoration. I enthusiastically recommend you read it:
Thompson River Study March 2014 . . . Second, the British Columbia Ministry of Forests, Lands and Natural Resources has at long last announced a ban on bait fishing in the Thompson from September 20 to December 31. For years, conservation-minded anglers have pointed out that the deadly effectiveness of salmon eggs and other natural baits compromised the province’s catch-and-release policy on the river. But old-timers stubbornly clung to their prerogatives to continue using methods proven to significantly increase mortality of released fish. Perhaps a new generation of steelheaders cares more about the fish than some outdated notion of anglers'”rights.”

Third, fishing on the Thompson River is now open from June 1 to October 31, after which provincial managers will have the opportunity to extend the season through November and possibly December, based on assessments of steelhead returns through Halloween. November is peak season. In the recent past, the legal season ended on September 30. A test gill-net fishery for chum and chinook salmon on the Fraser at Maple Ridge was used to measure how the steelhead run was shaping up. If reasonable numbers of steelhead were caught (and killed), the Thompson was declared open. Critics thought this approach scientifically unreliable and capricious.

Let’s hope this more conservative management system — coupled with the First Nations’ signal of interest in backing a serious effort to restore this grand river’s wild steelhead legacy–at least points us toward a better future for the fish. Tom with a nice, but scarred catch.

P. S. Elsewhere on the Pacific Coast, to the B.C. north, as of this week, the tyee test fishery on the Skeena River reveals a comparative numerical index of 120 this year versus an average of 138 during the last decade as a measure of the steelhead run. In other words, slightly fewer fish are returning. On the Columbia River, flowing between Washington and Oregon, to date 221,569 steelhead have been counted moving through the fishways at Bonneville dam (99,960 were wild) versus 186,840 last year, which saw a record number of chinook returning to this watershed the size of France.