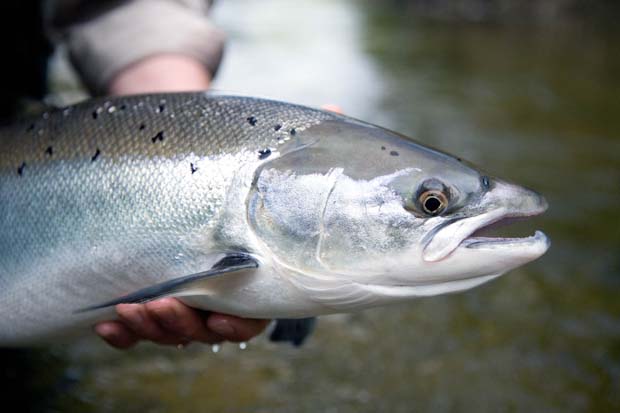 News: Greenland won’t give up going after salmon

[dropcap]G[/dropcap]reenland says it won’t go after as many wild Atlantic salmon this year, but conservationists from Canada and elsewhere remain concerned the Arctic country will continue to plunder threatened and endangered stocks.

New Brunswicker Sue Scott of the Atlantic Salmon Federation attended an international meeting last week to discuss the issue with representatives from both sides of the Atlantic.

“It’s the best of a bad lot,”Scott said in an interview Monday from her office in Saint Andrews. “We have endangered and threatened salmon from Canada and the United States going to Greenland. The whole concept of a mixed-population fishery is wrong. You cannot select a healthy harvest, so we are very much concerned. And that’s why we’re working to reduce the harvest far more than it is right now.”

On Tuesday, her organization will celebrate the final touches of a five-year, $60-million effort by governments, industry and volunteer groups to remove environmentally destructive dams on the Penobscot River in north-central Maine that flows by Bangor.

Salmon in the river are endangered, and it’s thought that if the sea-run fish have any hope of surviving over the long term, they shouldn’t be harvested when they are feeding and fatting up overwinter in the ocean.

Despite warnings from scientists and conservation groups like the federation, Greenland continues to kill salmon during the late summer and early fall. The fish migrate from Europe and North America to feed off its waters before returning to their home rivers to spawn. 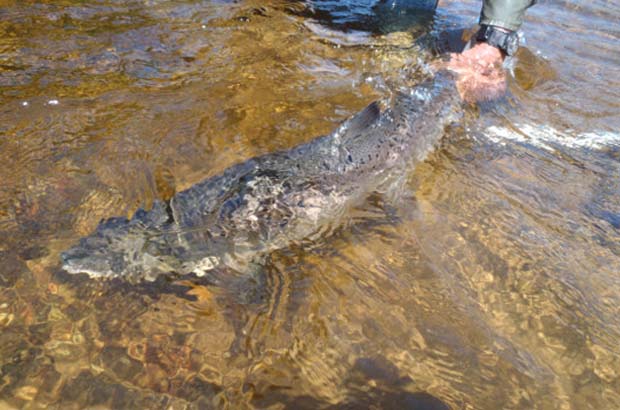 They argue there are other reasons for the salmon’s demise,pointing to climate change,increased seal and whale predation, destruction of river habitat and overfishing in places like Canada.

Ottawa imposed a catch-and-release rule for all salmon rivers in the Mari-times last year and extended the prohibition on killing this year, an unprecedented move to save the fighting fish that were once abundant in storied rivers like the Miramichi, Restigouche and St. John. Only indigenous people are allowed to kill them, in limited quantities.

However, Newfoundland and Labrador and Quebec continue to allow sport anglers to keep salmon from rivers that are still healthy.This, combined with the indigenous catch, means Canadians still harvest more salmon than Greenlanders do.

The meeting of the North Atlantic Salmon Conservation Organization took place in Germany last week. Greenland is represented by Denmark,its traditional ally, at the annual gathering,which also includes representatives from the governments of Canada, the United States, the European Union, Russia, and Norway. Non-governmental organizations will attend as observers.

Last year, the Greenlanders told the participants it would catch 45 tonnes of salmon annually in 2015, 2016 and 2017, ignoring the scientific consensus

It acknowledged over-harvesting by 13 tonnes last year, Scott said, after one of its municipalities, Kujalleq, delayed reporting its catch.

She said the Greenlandic representatives seemed open to the idea of imposing better measures for reporting this year, which could include stripping fishermen of licences if they fail to report on time.

They also seemed willing to forgo factory landings, she said. Last year, the Greenlanders opened factories to processing fish on Oct. 9 after earlier pledging to maintain only a subsistence fishery.

Many of the Inuit fishermen of Greenland depend on the salmon catch to boost their modest earnings. People in the Arctic country have traditionally depended on the bounty of the land and sea to survive, and there’s great popular support for its fishermen.

“If you remember last year, they were under great pressure from their fishermen, who were demanding 1,500 tonnes, which is ludicrous. But I think their government is in a very difficult situation and I can certainly understand the political pressure. The fishermen know how to exert it.”

Emanuel Rosing, the director general of the Ministry of Fisheries, Hunting and Agriculture in Greenland, said Monday he couldn’t confirm if his country would abide by all the positions its representatives spelled out at the meeting last week. He said a final determination would be made before the salmon fishing season begins.

“That is to be decided finally before 15th of August,” he said in an email. “I cannot say anymore before our government has decided that.”

NOTE: Featured Image: The North Atlantic Salmon Fund, NASF, is an international coalition of voluntary private sector conservation groups who have come together to restore stocks of wild Atlantic salmon to their historic abundance.

Join the Atlantic Salmon Federation to be on the leading edge of fly fishing for this epic, but endangered fish . . .