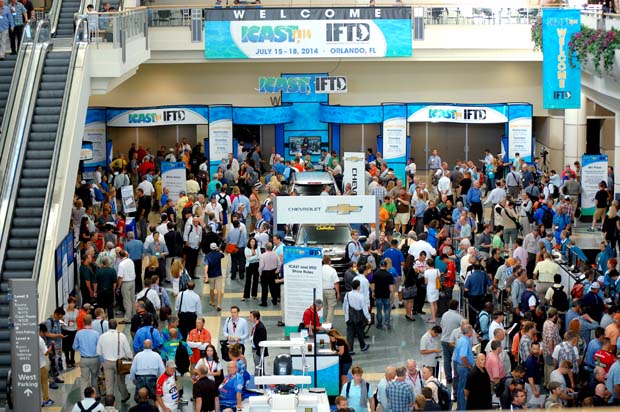 [dropcap]T[/dropcap]he world’s largest sportfishing trade show, the International Convention of Allied Sportfishing Trades, better known as ICAST, is was held July 14 – 17, at the Orange County Convention Center Orlando, Fla. Produced by the American Sportfishing Association (ASA), the industry’s trade association, ICAST – in its 58th year as the industry’s trade show – is the annual destination for the global recreational fishing industry. More than 12,000 representatives from the global sportfishing industry are in Orlando to see the latest innovations in tackle, gear, accessories and apparel

The single most important feature for ICAST exhibitors and attendees alike is the New Product Showcase. The New Product Showcase, sponsored by Fishing Tackle Retailer, embodies the sportfishing industry’s innovative and entrepreneurial spirit and rewards that ingenuity through the “Best of Show” new product awards competition.

Making up a special section of ICAST’s half a million gross square feet show floor, the New Product Showcase provides special visibility for the industry’s latest innovations in gear, apparel and accessories. This year, first time exhibitor eddyline kayaks and their C-135 YakAttack Edition, was voted by buyers and media as the best product in both the Boat category and the overall “Best of Show.”

“We are still a family-owned company, after 44 years,” said Tom Remsing, eddyline kayaks Sales manager. “With limited resources and a lot of drive, our staff worked very hard to bring this product to fruition. It’s an honor to win the Best of Show.”

“I congratulate all of the winners and everyone who participated in the New Product Showcase. Every year it’s amazing to see all the creativity and ingenuity our member companies use to add curiosity, excitement and discovery to the adventure of fishing,” said ASA President and CEO Mike Nussman. “I also thank Fishing Tackle Retailer for their sponsorship of this important event.”

The ICAST 2015 “Best of Show” awards were presented on Wednesday, July 15, during the Chairman’s Industry Awards Reception, sponsored by Costa, at the Orange County Convention Center.

If you missed the show, click here to see Best Of Show Awards for ICAST 2015