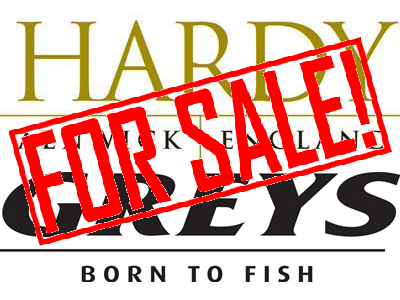 News: Inside story on Hardy and Greys

Ken Brewster, commercial director, says Hardy & Greys’ parent company is moving out of manufacturing.
No comment available from Jim Murphy, head of North America Sales and development. With no verification at this time, we’ve heard that Jim has formed an alliance with Dave Redington, his old partner in Redington Rods. Hmm?

[dropcap]I[/dropcap]n an exclusive interview with Angling International, Ken Brewster, the Commercial Director of Hardy & Greys has explained why the company is being put up for sale.

Hardy & Greys – a business that has built up an almost iconic status since its formation in 1872 – has this week been placed on the market by its owner the Harris & Sheldon Group, a family-owned UK private investment group.

The sale is part of a long-term business plan by Harris & Sheldon to divest itself of the manufacturing businesses under its control.

Hardy & Greys has struggled to make a profit in the UK in recent years and a reshuffle last year saw it make 19 staff redundant at its base in Alnwick, Northumberland.

The slimming down operation also saw the departure of its Managing Director Richard Sanderson, who has subsequently taken over a similar role at Shimano Normark in the UK.

However, Ken Brewster told Angling International that following the streamlining of the business, the first six months of 2012 have been the most profitable period for the company in five years.

The ownership of Hardy & Greys is seen as an opportunity for a new owner to take control of the brand and continue to expand its export markets, which is seen as key to its continuing success.

Brewster added: “The Miller family, which owns Hardy & Greys, has always been pretty hands-off so this is an opportunity for a more hands-on business to get hold of the Hardy brands. It is exciting news for the company.

“Our growth potential is in Germany, the US and new European markets,” added Brewster, who earlier this month announced the setting up of a subsidiary in France. The sale will not affect those plans and Brewster stressed that it was business as usual for the company as it searched for a new owner.

“We will not be putting the brakes on anything and all new initiatives will carry on as normal during the sale period.”

No asking price has been revealed for the company and Brewster said that there was no urgency for a quick sale. “We will wait for the right bid,” he added.

Hardy & Greys has been owned by the Coventry-based Harris & Sheldon Group for 45 years and is the last manufacturing company in its portfolio.

The new owner of Hardy & Greys will be getting their hands on three brands –Hardy, Greys and Chub – covering all branches of recreational fishing, and a company that has been at the forefront of fishing tackle development since it got its first patent in 1880.

It developed the first carbon fibre fishing rods and, in partnership with 3M, recently created rods made from the new SINTRIX™ carbon fibre material that has won a string of awards at international shows. 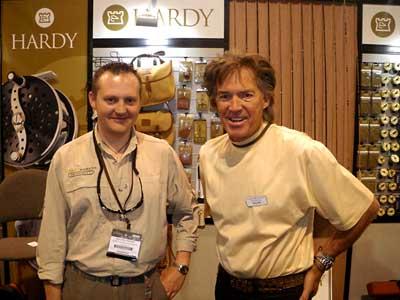 The most successful tarpon angler in the world joins the Hardy Greys team. Andy Mill on the right will be taking the lead role in the development of the Company’s saltwater range of rods and reels and will be working closely with Howard Croston, head of fly fishing product development. The announcement about Andy’s role was just two days ago so I guess H&G is here to stay.

The most successful tarpon angler in the world joins the Hardy Greys team.

Meanwhile, Brewster has spoken about the decision by Hardy & Greys to set up a subsidiary in France along the lines of the operations that have proved such a success in Germany and the US.

The fishing tackle manufacturer has been developing business overseas as its bids to reduce dependence on its traditional UK markets which have endured a difficult time over recent years.

Brewster told Angling International: “The UK market has been difficult for some time and we have been looking at where other opportunities lie overseas.

“We launched subsidiary companies in Germany in 2007 and North America a year later and both have been very successful, producing a substantial amount of business that is still showing encouraging growth curves.

“As a result of this we have looked at other European markets and where we think the biggest potential lies. France is the next logical step to launch a subsidiary operation.

“The business will not be on the same scale as Germany, where we now employ a total of 12 people, including seven sales representatives, and have our own warehouse in Lohne. The French operation will consist of a small sales and marketing team concentrating initially on our fly and carp fishing brands.

“Geographically France is huge and we will be aiming to develop the market, but we will be matching our investment with opportunity. Having our own team there will give us the flexibility to grow in line with the business.

“It costs a lot of money setting up our own operation, investing in staff, warehousing and inventory, but we believe it is warranted.

“Our experience with distributors around the globe has been mixed and rarely maximizes the full market potential. There is no substitute for having your own team on the ground in certain territories.”

Hardy & Greys has placed advertisements in the fishing trade press for a Key Accounts Sales Manager and a Sales Representative for the French business and has been sounding out retailers across the country.

“We have been talking to independent retailers and regional multiples. Our brands – particularly Hardy and Greys – have recognition in France and that obviously will help open some doors,” added Brewster.