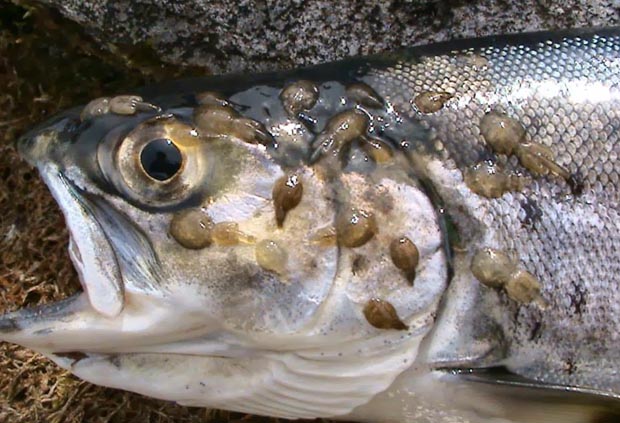 When you think about aquaculture as a way out of this mess we created by overfishing and lawlessness of poaching worldwide, no one stops to think about how stupid it is to hold fish in a pen in the open sea. Here’s some downright common sense thoughts about how fish farming should be conducted and managed. The reality, logistics and benefits of fish farming on land are astounding. Why didn’t they think of this before?

[dropcap]W[/dropcap]hen considering the costs of growing fish, specifically Atlantic salmon in land-based operations, it is imperative that there be a level playing field. It can easily be shown that if ocean-based open pen operations were required to be environmentally sustainable, without government assistance and no compensation for mass mortality, these farms would in fact be an economic disaster. 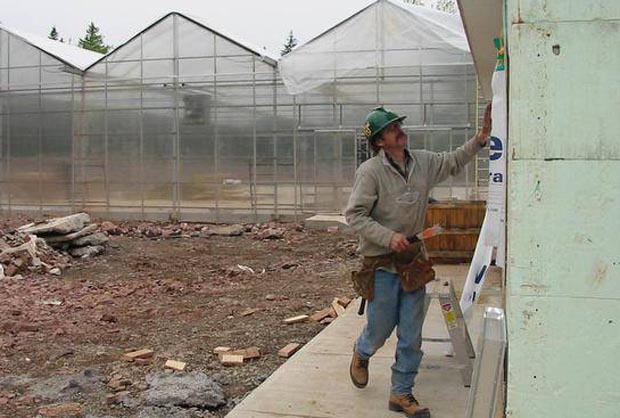 This $2.5-million aquaculture facility on the Millbrook First Nation near Truro, shown here under construction in 2003, can produce 130 metric tonnes of Arctic char annually. Fred Giffin of Liverpool argues on-land pens are better for the environment and ultimately cheaper than open ocean pens.

Let’s consider a three-point minimum requirement for the open pen industry to continue operation. These points could have been made several years ago, and, if enforced, it is likely that most ocean pens would be shut down by now because of excessive costs or lack of technological capability. The ocean environment and coastal communities would be far better for this eventuality.

Here are the suggested regulatory requirements.

1. Ocean-based open pen operators MUST research, develop and install means of waste reclamation within a specified time frame and meet a recovery efficiency of 90 per cent of waste, or cease operations.

2. Use of pesticides for sea lice control that are harmful to other species must be discontinued.

3. There will be no compensation for mass mortality of fish, and no approval for the marketing of fish that are infected with ISA virus or other diseases.

Why waste reclamation? Exactly 100 per cent of fecal and food waste goes directly into the ocean, rendering the area uninhabitable by any other species. No other living organism, including humans, can get away with such pollution. Waste in the outer periphery of the area is consumed by other species, including lobster, exposing them to poisons being used in the industry.

Why a total ban on pesticides? Cooke Aquaculture has used illegal pesticides proven to be lethal to lobsters. They have been caught twice, fined once — pocket change compared to their profits. Studies in Norway have shown that accumulated toxins in fish from these farms may put unborn babies at risk. In general, the toxins are foreign to the ocean environment and are no doubt harmful to all living organisms in the area. Without the pesticides, sea lice would attack the caged fish by the millions, again rendering the operation totally unviable.

Compensation for mass mortality? Roughly $120 million has been spent to compensate open pen operators for the mortality of millions of fish over the past few years. This is beyond comprehension. In lieu of compensation, Cooke Aquaculture was approved by the Canadian Food Inspection Agency to market 240,000 infectious salmon anemia-infected fish as close to maturity as they could get before they died of the disease, as an alternative to the compensation. Capital assistance? Cooke Aquaculture was given a grant/loan combo of $25 million to expand operations in Nova Scotia by the previous government.

Now let’s look at the economic viability of land-based operations vs. ocean-based in this new light. The land-based operators ensure environmental protection in the design. Ocean-based ones are not required to do anything about environmental protection and do not have the technology. Such technology, if developed, would be so costly as to likely result in an operating deficit.

Land-based operators do not have to use pesticides. Ocean-based operators require these dangerous chemicals to kill sea lice. Without the protection, the fish would not likely survive.

To my knowledge, land-based operators have not received government assistance in large numbers and have not been compensated for mortality.

Will the Doelle/Lahey regulatory review framework require that the open pen fish farming industry meet the aforementioned requirements for environmental protection? If they do, the industry will shut down because of excessive costs. More likely, compromise will allow the industry to continue to operate at a profit and pollute and poison the ocean. Whatever the outcome, if the ocean-based operations were to be totally committed to protection of the environment, land-based operations would win the economic viability comparison by a landslide.

We need a strong appeal to support land-based operations and boycott ocean open pen products. This will send a message that health and the environment are important to us all. Greed of corporate giants, coupled with government arrogance, incompetence and apathy, has created this ocean monster. As individuals we can help to bring it down.

Fred Giffin, B.Sc. (chemistry), of Liverpool, is retired from Bowater Mersey and was on a committee that set environmental standards for the pulp and paper industry in Nova Scotia and Canada.