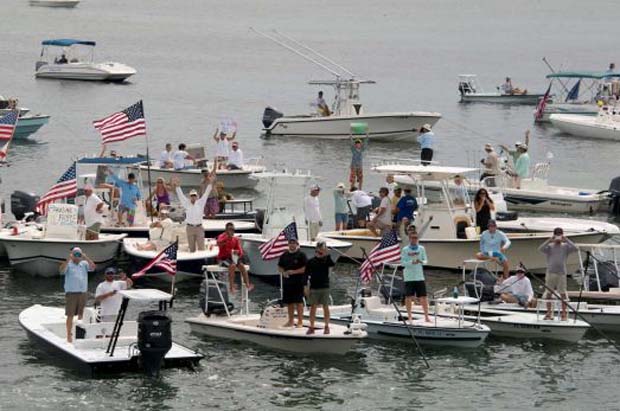 [dropcap]E[/dropcap]ach day at noon, Capt. Matt Bellinger usually does his local radio fishing update from somewhere in the back country of the vast Everglades National Park, where he takes clients to fish for snook and tarpon or photograph birds and other wildlife.

He always ends his updates with his mantra: “Get on the water. And go fish!”

But on Wednesday, sunny with calm seas and a gentle breeze — a perfect day to be out on the water — Bellinger could not take clients to his beloved fishing grounds. Like all 401 national parks, the Everglades National Park was closed by the government shutdown.

So instead of fishing, Bellinger took his flats boat to Cowpens Channel, where about 150 other boats gathered to protest the closure of the marine park.

“I’ve lost $10,000 in canceled trips that I’ll never get back,” said Bellinger, whose Bamboo Charters runs two boats. “I’m already into my war chest to survive.”

Capt. Randy Towe, a fishing guide in the Keys for 35 years, organized the peaceful rally to send a message to Congress that the Oct. 1 shutdown has affected far more people than just furloughed federal workers.

“The point we’re making is that a guide’s booked fishing day that is cancelled is revenue that is gone and we’ll never get back,” Towe said. “We don’t have an insurance claim to fill out. It’s lost revenue because of the government’s poor handling of everything. This closure has already done a lot of damage to good, innocent people.”

At least one congressman was listening to their plight. Rep. Joe Garcia, who represents the Keys, issued a statement Wednesday that said: “I stand with you. As you make your plight. …”

The self-employed fishing guides don’t care about the politics of Washington. They want to work.

“This is idiotic,” said longtime Keys fishing guide Gary Ellis. “I’d like to tell them all to grow up and get a life and take care of the American people.”

The shutdown will be devastating to this weekend’s Redbone At-Large Tournament in Key Largo. It’s part of the celebrity tournament series Ellis founded more than 25 years ago to raise money for cystic fibrosis, a disease that affects his daughter.