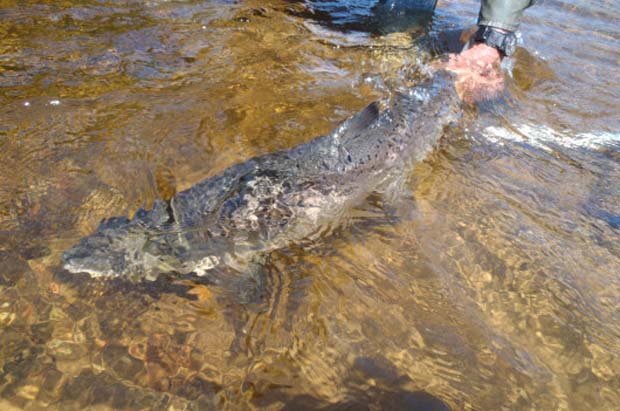 New conservation measures for Atlantic salmon recreational angling throughout Gulf Region.  The Minister is acting on recommendations from the Ministerial Advisory Committee on Atlantic Salmon

[dropcap]A[/dropcap]cting on a first series of recommendations made by the Ministerial Advisory Committee on Atlantic salmon, the Honourable Gail Shea, Minister of Fisheries and Oceans, today announced new conservation measures for Atlantic salmon recreational angling throughout the Gulf region, in 2015.

These new conservation measures are also supported by key stakeholders, including the Atlantic Salmon Federation, the New Brunswick Salmon Council, the Nova Scotia Salmon Association and the Miramichi Salmon Association, who petitioned the Department for a one-year moratorium on the issuance of tags.

For conservation reasons, there will be no retention of Atlantic salmon in New Brunswick and Nova Scotia this year. Anglers will continue to be able to fish salmon as a catch-and-release.

This measure has already been in place in Prince Edward Island and on some parts of the Miramichi river system and will be extended to all scheduled waters of New Brunswick and Nova Scotia where salmon angling was already permitted.

Additionally, anglers will be required to use artificial flies with a single barbless hook during the salmon angling season.

In recent years, annual counts of salmon reached some of the lowest returns on record for many rivers, including the Miramichi and the Restigouche rivers. This follows similarly low counts in 2012, and 2013, following high returns in 2010, and 2011. In Eastern Canada, total abundance of Atlantic salmon at sea prior to marine exploitation was as high as 1.7 million fish in the mid-1970s, but is presently about 600 000 fish, a decline of 69% over 42 years. On March 9, Minister Shea launched the Ministerial Advisory Committee on Atlantic Salmon. The mandate of the Committee is to focus on conservation and enforcement measures, predation, strategy to address international, unsustainable fishing, and focused areas for advancing science. The Committee has so far held meetings in Nova Scotia and New Brunswick and will produce a report at the end of the consultation period. However, considering the urgent need to make management decisions for the 2015 angling season, the Minister asked the Chair to produce interim recommendations.

“Our Government is committed to protect Atlantic salmon as this resource is of critical economic, historic and cultural importance to Atlantic Canada. Conservation measures announced today were endorsed by the Ministerial Advisory Committee on Atlantic Salmon as well as several other groups. It will allow anglers to practice their sport while enabling an increased number of salmon to reach spawning grounds.”

– The Honourable Gail Shea, Minister of Fisheries and Oceans