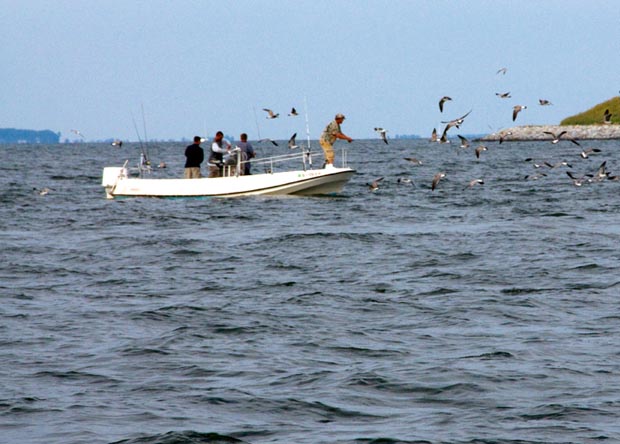 A report released today by the American Sportfishing Association (ASA) makes a powerful case that from an economic perspective, recreational fishing is just as important as commercial fishing, despite a much lower overall impact on the resource. According to the report, anglers landed just two percent of the total saltwater landings compared to ninety-eight percent caught by the commercial fishing industry. Photo of Chesapeake Bay. A recreational fly angler’s day on the water fishing for stripers.

“It’s something we’ve suspected for some time, but NOAA’s own data clearly shows that recreational saltwater fishing needs to be held in the same regard as commercial fishing,” said ASA President and CEO Mike Nussman. “The current federal saltwater fisheries management system has historically focused the vast majority of its resources on the commercial sector, when recreational fishing is found to have just as significant an economic impact on jobs and the nation’s economy.”

Among the findings are:

• The recreational sector added $152.24 in value-added, or GDP, for one pound of fish landed, compared to the commercial sector’s $1.57 for a single pound of fish.

• Within the jobs market, the recreational sector made up fifty-four percent of all jobs, both recreational and commercial. This amounts to 455,000 recreational jobs compared to 381,000 on the commercial side.

• For every 100,000 pounds landed there were 210 recreational fishing jobs but only 4.5 jobs in the commercial fishing industry.

The Magnuson-Stevens Act (MSA), the primary law governing marine fisheries management in the U.S., was originally passed in 1976 and has been reauthorized several times since. While the MSA has made significant strides to eliminate non-domestic fishing in U.S. waters and end overfishing, many in the recreational fishing community have argued that the law is written primarily to manage commercial fishing and does not adequately acknowledge or respond to the needs of recreational fishing.

“For decades federal management of recreational fishing has been like trying to fit a square peg into a round hole,” said Nussman. “Perhaps the MSA was written to focus on the commercial sector because that’s where 98 percent of the overall harvest is taken. But when you consider that the economic impacts of the two sectors are similar, it makes a strong case for revamping the MSA to better meet the needs of the recreational fishing community.”

The MSA expires at the end of fiscal year 2013 (September 30, 2013), though many expect that a full reauthorization will take a year or longer to develop. On March 13, 2013, the House of Representatives Natural Resources Committee held an oversight hearing focusing on the MSA reauthorization, and more hearings are expected this year and beyond.

Nussman concluded, “ASA and our partners in the recreational fishing community look forward to working with Congress to develop reasonable legislative solutions that will produce a federal fisheries management system that finally works for, not against, recreational fishing.”

The American Sportfishing Association (ASA) is the sportfishing industry’s trade association committed to representing the interests of the entire sportfishing community. We give the industry a unified voice, speaking out on behalf of sportfishing and boating industries, state and federal natural resource agencies, conservation organizations, angler advocacy groups and outdoor journalists when emerging laws and policies could significantly affect sportfishing business or sportfishing itself. ASA invests in long-term ventures to ensure the industry will remain strong and prosperous, as well as safeguard and promote the enduring social, economic and conservation values of sportfishing in America. ASA also gives America’s 60 million anglers a voice in policy decisions that affect their ability to sustainably fish on our nation’s waterways through KeepAmericaFishing™, our angler advocacy campaign. America’s anglers generate over $48 billion in retail sales with a $115 billion impact on the nation’s economy creating employment for more than 828,000 people.