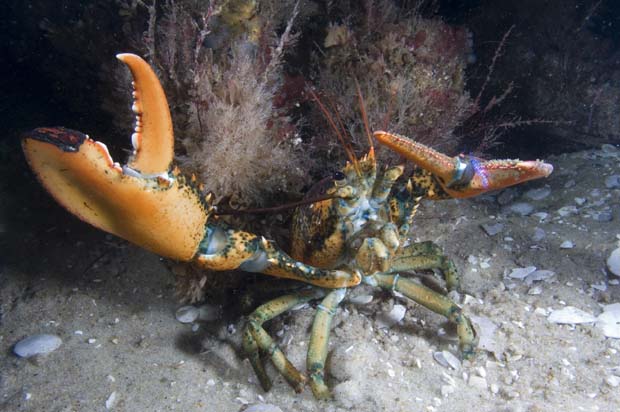 [dropcap]T[/dropcap]hese shifts have not been uniform, and sometimes have occurred at different rates and in different ways than expected. The leading explanation for these changes has been biological differences among species, but a new study suggests that the local climatic conditions are more likely causing these shifts. In a study published September 13 in the journal Science, researchers from the U.S. and Canada suggest that climate velocity – the rate and direction that climate shifts in a particular region or landscape – explains observed shifts in distribution far better than biological or species characteristics.

The team compiled four decades of data from research vessel surveys of fish and invertebrates conducted around the continental shelves of North America by NOAA’s National Marine Fisheries Service (NOAA Fisheries) and Canada’s Department of Fisheries and Oceans (DFO).

American lobster appear to be shifting northward as ocean waters warm, according to a study by NOAA

“This is the first time we’ve combined U.S and Canadian fisheries data from the Atlantic, Pacific and Gulf of Mexico coasts of North America at this scale,” said study co-author Michael Fogarty, a fisheries biologist at the Woods Hole Laboratory of NOAA’s Northeast Fisheries Science Center (NEFSC). “We also sampled a broad range of ecosystem types, from sub-tropical to sub-Arctic. The shifts in species distributions were not always intuitive, or what was expected to happen. For example, individual species like American lobster shifted north in the northeast U.S., while big skateshifted south on the West coast, and Pacific cod in Alaska remained essentially the same.”

Many marine and terrestrial species are not shifting in response to climate change as expected. To understand why, study authors measured range shifts, studied regional temperature changes, and considered geographic constraints. For example, the Gulf of Mexico has an east-west coastline that prevents a northerly or poleward shift of species in response to warming ocean waters,. Species there shifted deeper, into cooler bottom waters.

Previous studies that attempted to explain why the shifts were occurring at different rates and in different directions than expected did not have the data necessary to study changes in detail. By looking at the larger data sets, researchers working on this study could examine individual species and groups of species within a geographic region, the temperature range inhabited by each species or species group, and the impact of temperature changes over time. By determining the preferred temperature for each species, where the preferred temperatures moved, and then where the species had moved, the researchers found that many of the species matched those shifts over time in what they called “the complex mosaic of local climate velocities.”

Atlantic cod are another cold-water species that may be migrating to escape warmer water, NOAA says

Across all taxa, 74 percent shifted latitude in the same direction as climate velocity, and 70 percent shifted depth in the same direction. Likewise, 73 percent of shifts to lower latitudes and 75 percent of shifts to shallower water were explained by climate velocity. Local variations in the environment appear to be a much more accurate predictor of species shifts than variations in the species life histories and other factors.

“The world is changing, and that includes the ecology of the oceans,” said Fogarty, who heads the NEFSC’s Ecosystem Assessment Program. “Ocean temperatures are not the same from the surface to the bottom. Study after study show that climate change is affecting global fisheries, and we need to be aware of the changes and begin adapting to them.”

The authors suggest that marine species may shift more rapidly than species on land because there are fewer barriers to dispersal in the marine environment and species can more completely seek out their temperature, or thermal, niches. Rapid range shifts, however, will fundamentally reorganize marine communities, resulting in fisheries conflicts across borders and challenges to traditional management approaches.

“We will continue to see shifts in the range of marine populations, and the shifts will change the ecosystem, those who fish for these species in the ecosystem inbcluding the coasta lcommunities supporting the fisheries, and the management systems regulating the fisheries,” Fogarty said. “We can begin to forecast climate velocities and use these forecasts as a tool in manging fisheries in the future.”

In addition to Fogarty, other authors of the study include lead author Malin Pinksy, Jorge Sarmiento and Simon Levin of Princeton University, and Boris Worm of Dalhousie University in Halifax, Nova Scotia, Canada. Pinsky, a postdoctoral researcher at Princeton, recently joined the faculty at Rutgers University.

NOAA Fisheries Service is dedicated to protecting and preserving our nation’s living marine resources and their habitat through scientific research, management and enforcement. NOAA Fisheries Service provides effective stewardship of these resources for the benefit of the nation, supporting coastal communities that depend upon them, and helping to provide safe and healthy seafood to consumers and recreational opportunities for the American public.

NOAA’s mission is to understand and predict changes in the Earth’s environment, from the depths of the ocean to the surface of the sun, and to conserve and manage our coastal and marine resources. Join us on Facebook, Twitter and our other social media channels.