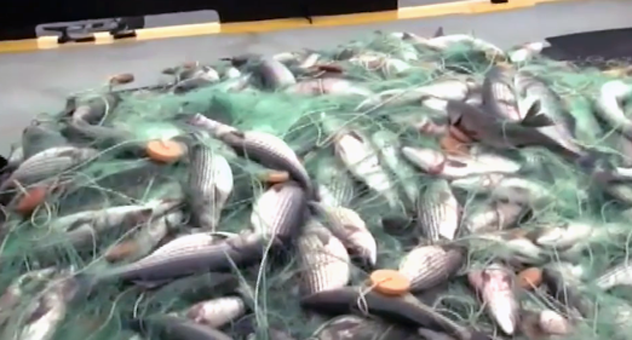 By AndrewFebruary 25, 2015No Comments
By Catherine Rentz

[dropcap]O[/dropcap]n a midwinter afternoon, William “Billy” J. Lednum steered the Kristin Marie into the Knapps Narrows, a channel that separates Tilghman Island from the rest of the Eastern Shore. It was 35 degrees and gusty, but Lednum, a “waterman cowboy” who has won dozens of boat-docking trophies, whipped the stern around and flawlessly backed into his slip. After tying his boat to the dock, he unloaded 125 silver-scaled rockfish, weighing a combined 699 pounds.

This was the 42-year-old waterman’s last trip before heading to prison — and perhaps the last rockfish haul of his life. Lednum, known around Tilghman Island as “Billy,” is now Federal Bureau of Prisons inmate No. 57529-037 at Fort Dix, N.J.

“Days like today I would have stayed home,” he said, referring to the numbing cold and wind that penetrated his red sweatshirt. “But I moved things up so I could get things done.”

On insular Tilghman — a 2.7-square-mile island with fewer than 800 residents — many are outraged by Lednum’s fall. Not because of his crime: poaching rockfish in violation of state and federal law.

They are upset that this fourth-generation islander and chief of the volunteer fire department will be serving a year and a day behind bars for pursuing his livelihood. Neighboring families can’t recall anybody ever going to prison “just for catching a fish.” Curiously, not even watermen who had their 2011 quotas slashed as a result of the poaching said they were upset with him — or the three others convicted last year in the poaching scheme.

The Tilghman Island Volunteer Fire Company recently decided that Lednum should continue as chief while he’s in prison. Two marinas have offered to dock the Kristin Marie for free. A waterman friend will be mowing his lawn while he’s gone.

Patricia McGlannan, co-owner of the Tilghman Island Country Store, notes that Lednum and the other men convicted in the poaching scheme “are the very same people who take care of the community and do all the volunteering. So there is your great irony. … I’m not for illegal fishing, but you meet the guy and you say, ‘Damn, it’s just fish.'”