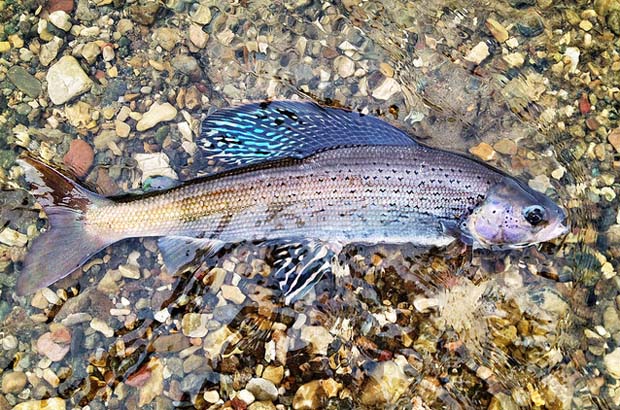 Michigan’s Arctic grayling poised for a long-awaited comeback. Plans underway to reintroduce the species of fish that hasn’t swum in state’s rivers in nearly 100 years

[dropcap]G[/dropcap]rayling, Michigan, a fishing hub in the woods of central Michigan, is named for a historic fish that hasn’t swum its rivers in nearly a century.

But now the fish are getting a second chance at a comeback. The Arctic grayling comes in a wide array of colors. Coloration can vary from stream to stream. Their dorsal fins are typically fringed in red and dotted with large iridescent red, aqua, or purple spots and markings. These colorful markings are most dramatic on large grayling. Arctic graylings’ backs are usually dark. Their sides can be black, silver, gold, or blue. A band of gold forms a border between their sides and white bellies, which are in sharp contrast to their pelvic fins striated with iridescent orange, red, or pink. The sides of the body and head can be freckled with black spots. A black slash lies on each side of the lower jaw. The iris of their eyes is often gold in color. Only their adipose, caudal (tail), pectoral, and anal fins are without much color; typically dull and gray. Arctic grayling are larger and thicker than that of its cousins (salmon, trout, and char) and they sport a unique scalloped edge. Image provided courtesy of Alaska Department of Fish and Game.

Avid fly fishers from Grayling have had to travel thousands of miles to catch the species, which used to flourish in their own backyards, said Steve Sendek, a retired fisheries biologist from the town.

Arctic grayling, a cousin of the trout in the salmonid family, like cold, clear stable waterways, the kind you find the idyllic backwoods of Michigan. In the 1800s, however, settlers began to overfish and introduced nonnative species of trout, which competed for food and space. A growing logging industry also disrupted and destroyed hundreds of miles of grayling habitat.

“All of those came together in a perfect storm to push the grayling off the map in Michigan,” Mr. Sendek said.

The state’s Department of Natural Resources announced this month that plans were under way for yearslong effort to reintroduce the species to the Manistee River, which passes through town. It is a joint project between the state, researchers at Michigan Technological University and the Little River Band of Ottawa Indians—all of whom want to see Michigan’s historic fish species returned to their native environment, said Todd Grischke, assistant chief of the fisheries division at Michigan’s Department of Natural Resources.

Michigan was one of only two in the lower 48 to ever have native grayling—Montana is now fighting to protect its dwindling wild populations.

“They talk about carloads of grayling fish, well-train carloads in 1800s, being shipped off because they were that plentiful,” Mr. Grischke said.

This isn’t the first attempt to restock grayling in Michigan’s rivers, Mr. Grischke said. Biologists raised grayling in hatcheries in the 1980s and 1990s, and then tried to introduce them into the wild as yearlings. But the delicate 1-year-old fish didn’t survive the transition.

This time, the graylings will begin life in the rivers as eggs in incubators. The special containers will protect them from harm until they are big enough to survive on their own. “These incubators offer, I don’t want to say risk-free, but it offers a competitive advantage so that they can grow into mature adults,” Mr. Grischke said.

Researchers at Michigan Tech are exploring an area about 70 miles down river from Grayling to reintroduce the fish, Mr. Grischke said.

The first round of fry, hatched eggs, could be in the water by 2018. But it might be as many as 10 years before adults are fully established in the Manistee River

“This is an old-fashioned place and visitors ask about the grayling,” said Robert Tomlinson, who owns a local fishing lodge and chairs the local visitors board. “It could be amazing to bring it back.”

Fly Fishing Notes: Arctic grayling may travel more than  100 miles in one year. Arctic Grayling can live up to 32 years and can weigh up to 5-pounds fully matured. They are willing on almost any dry fly during the summer months in Alaska, and deeper as the water cools. Juveniles are usually mid-river with adults at headwaters. Their lack of resistance to bite is similar to peacock bass, largemouth and smallmouth bass, and bream (panfish). Finding them is the anglers task.