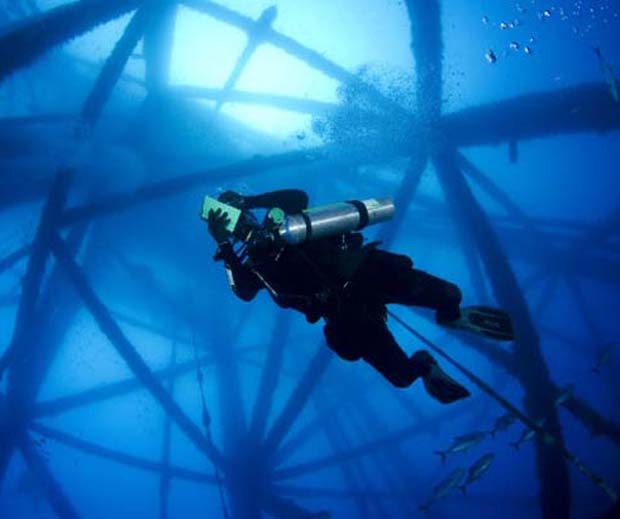 [dropcap]O[/dropcap]ld offshore oil platforms may be able to hang around in the Gulf of Mexico longer for fish and fishermen to enjoy, thanks to a federal overhaul of removal policies.

A diver explores former offshore oil equipment that has been turned into an artificial reef in the Gulf of Mexico. New federal rules may mean more such rigs will be turned to reefs in Texas waters.

The Bureau of Safety and Environmental Enforcement has revised the policies to encourage participation in its Rigs-to-Reefs program, which allows operators to leave non-producing platforms deep in the Gulf as artificial homes for underwater creatures.

Especially pertinent to the Texas coast is the removal of a mandatory five-mile buffer between man-made reefs.

The bureau initially created the restriction to prevent the reefs from being clustered too closely and possibly disrupting shipping or future pipelines.

But the Texas coastline includes miles of offshore waters that are too shallow for ships, and policymakers agreed to allow states, which assume liability for the platforms once they are adopted into the program, to decide on the locations for their reef structures.

David Smith, a spokesman for the Bureau of Safety and Environmental Enforcement, said that before the revision, operators sometimes had to dismantle platforms and move them to previously authorized sites.

Fishermen and environmentalists have encouraged the revisions that allow more platforms to stay in place, avoiding disruption to habitats for fish, coral, turtles and mussels that have flourished among the steel legs of the structures.