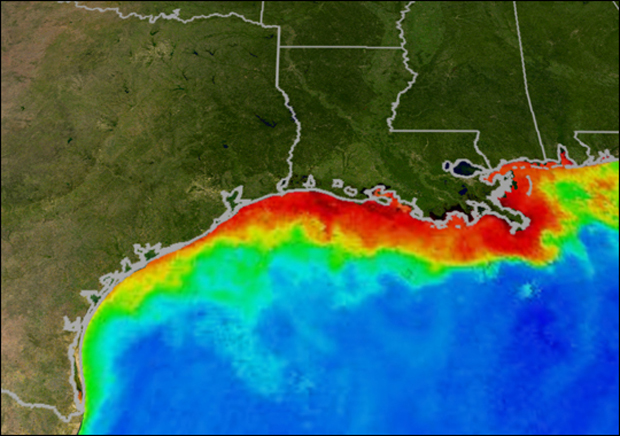 Also anticipating smaller hypoxia levels than in past in Chesapeake Bay

[dropcap]L[/dropcap]ess oxygen dissolved in the water is often referred to as a “dead zone” because most marine life either dies, or, if they are mobile such as fish, leave the area. Habitats that would normally be teeming with life become, essentially, biological deserts.
Click to watch Dead Zone video.

Scientists are expecting a very large “dead zone” in the Gulf of Mexico and a smaller than average hypoxic level in the Chesapeake Bay this year, based on several NOAA-supported forecast models.

NOAA-supported modelers at the University of Michigan, Louisiana State University, Louisiana Universities Marine Consortium and the are forecasting that this year’s Gulf of Mexico hypoxic “dead” zone will be between 7,286 and 8,561 square miles which could place it among the ten largest recorded. That would range from an area the size of Connecticut, Rhode Island and the District of Columbia combined on the low end to the New Jersey on the upper end. The high estimate would exceed the largest ever reported 8,481 square miles in 2002 .

Hypoxic (very low oxygen) and anoxic (no oxygen) zones are caused by excessive nutrient pollution, often from human activities such as agriculture, which results in insufficient oxygen to support most marine life in near-bottom waters. Aspects of weather, including wind speed, wind direction, precipitation and temperature, also impact the size of dead zones.

The Gulf estimate is based on the assumption of no significant tropical storms in the two weeks preceding or during the official measurement survey cruise scheduled from July 25-August 3 2013.  If a storm does occur the size estimate could drop to a low of 5344 square miles, slightly smaller than the size of Connecticut.

This year’s prediction for the Gulf reflect flood conditions in the Midwest that caused large amounts of nutrients to be transported from the Mississippi watershed to the Gulf. Last year’s dead zone in the Gulf of Mexico was the fourth smallest on record due to drought conditions, covering an area of approximately 2,889 square miles, an area slightly larger than the state of Delaware. The overall average between 1995-2012 is 5,960 square miles, an area about the size of Connecticut.

A second NOAA-funded forecast, for the Chesapeake Bay, calls for a smaller than average dead zone in the nation’s largest estuary. The forecasts from researchers at the University of Maryland Center for Environmental Science and the University of Michigan has three parts: a prediction for the mid-summer volume of the low-oxygen hypoxic zone, one for the mid-summer oxygen-free anoxic zone, and a third that is an average value for the entire summer season.