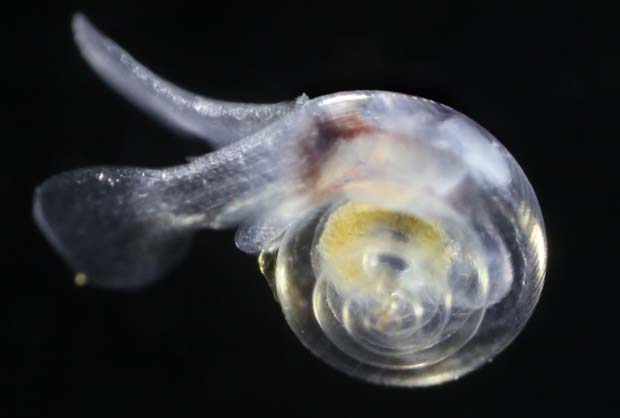 [dropcap]A[/dropcap] NOAA-led research team discovered that increased ocean acidity is dissolving the shells of tiny marine snails off the West Coast, according to a new paper published in Proceedings of the Royal Society B.

Researchers estimate that the percentage of these affected pteropods has doubled in the continental shelf waters since the pre-industrial era, and is expected to triple by 2050.

Acidification in the world’s oceans will rise by as much as 170 percent by the end of the century, a team from the International Geosphere-Biosphere Program predicted in recent research.

Ocean acidification is when ocean waters become corrosive by absorbing one third of the atmosphere’s man-made carbon dioxide. During the upwelling season, winds bring water rich in carbon dioxide up from depths of about 400-600 feet to the surface and on to the continental shelf.

Needless to say, scientists were surprised by the findings.

“We did not expect to see pteropods being affected to this extent in our coastal region for several decades,” William Peterson, an oceanographer at NOAA’s Northwest Fisheries Science Center and co-author expressed in a news release.

This change in ocean chemistry is affecting marine life, particularly organisms with calcium carbonate skeletons or shells, such as corals, oysters, mussels, and small creatures like pteropods that are at the bottom of the food chain.

The free-swimming snail, which provides food for pink salmon, mackerel and herring, can be found in oceans around the world. Not only is the tiny critter threatened, but indirectly these results suggest more serious consequences as well.

“Acidification of our oceans may impact marine ecosystems in a way that threatens the sustainability of the marine resources we depend on,” said Libby Jewett, Director of the NOAA Ocean Acidification Program.

“Research on the progression and impacts of ocean acidification is vital to understanding the consequences of our burning of fossil fuels,” Jewett said.