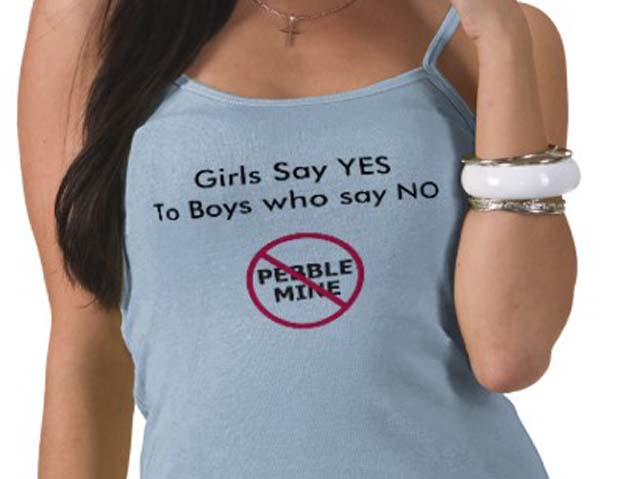 News: Is Pebble Mine dead? Not yet! [dropcap]B[/dropcap]efore pulling out of the Pebble Mine project last week, Anglo American (AAUKY), one of the world’s biggest mining companies, had invested six years and at least $541 million—in a partnership with Vancouver-based Northern Dynasty Minerals (NAK)—to develop the site in southwestern Alaska. Wait, pause on that number for a sec: $541 million. That’s right, the London-based multinational and its U.S. subsidiary (AA Pebble) just forfeited a return on more than half a billion dollars of its shareholders’ money. By the end of its 60-day withdrawal from the project (mid-November), that figure will probably end up closer to $580 million. Anglo American has also indicated it will write down a $300 million loss (misreported as a “penalty” elsewhere) to remove the proposed mine as an asset from its books.

Although a far smaller player, Northern Dynasty will soon own 100 percent of the project, thought to be worth $300 billion or more, and vows to carry on. Having completed more than a million feet of exploratory, diamond-core drilling in 1,200 holes, the former partners also amassed a 27,000-page study of the terrain, but had not begun the formal permitting process. In fact, Northern Dynasty has plowed $180 million into Pebble since it first secured the rights to the region in 2001. Huge mining consortiums frequently seed nine-figure projects, but $760 million-plus is still a large sum, so why did Anglo American bail now? In the statement that accompanied the Sept. 16 decision, its chief executive officer, Mark Cutifani, explained that the move was not driven by a reassessment of the site’s potential, but an effort to “prioritize capital to projects with the highest value and lowest risks.”

To the energetic opponents of the mine, and they are not scarce, the greatest risk remains the one posed by the Pebble Mine to the salmon fisheries in Alaska’s Bristol Bay, as well as to the overwhelmingly Native American communities that harvest the fish. Close to one-half of the world’s sockeye salmon spawn in the watersheds downstream from the mine site. Could it be that Anglo American believes the Environmental Protection Agency will block the mine? (Under the Clean Water Act, the agency has the authority to veto the mine on environmental grounds.) Certainly the agency’s most recent watershed assessment (PDF) suggests it might. And what of the No Dirty Gold campaign, in which more than 50 gold buyers and retailers, including Zale (ZLC), Wal-Mart (WMT), QVC (LINTA), and Balfour (the graduation ring company), signed a pledge not to buy gold from the Pebble Mine? Is “dirty gold” becoming the new conflict diamond?

“I do not know whether the No Dirty Gold campaign contributed to Anglo American’s decision. I do believe that the campaign was a meaningful part of very broad-based opposition,” says Michael Kowalski, the CEO of Tiffany (TIF), one of the most prominent signatories of the preemptive boycott. Opposition to the mine, he notes, includes a majority of Bristol Bay residents, sport and commercial fisherfolk, jewelers, and “all those concerned with protecting the Bristol Bay ecosystem. … I assume that this diverse, robust opposition was reflected in a risk/return assessment of this project.”

For its part, Anglo American is sticking to its story that there’s no more to its withdrawal than an internal review of works-in-progress. Cutifani was traveling and couldn’t be reached for this article, but the company’s top spokesman, James Wyatt-Tilby, replied via e-mail. Did the price of gold, well below its 2011 highs, factor in? No, Wyatt-Tilby said. Had its outlook on regulators and securing permits changed? No again. “Our views on Pebble as a mining project are unchanged. … We wish the project well, and express our thanks to those who have supported Pebble.” Asked directly about the No Dirty Gold campaign, he declined to bite, reiterating that “our decision to withdraw from the project is the result of an internal prioritisation of the many projects that we have in our portfolio.”

Anglo’s departure did not have a favorable effect on Northern Dynasty’s share price (down more than 50 percent to $1.50 as of Friday). Northern Dynasty’s vice president for communications, Doug Allen, did his best not to sound defensive. “We don’t have a gun to our head,” says Allen. “We have no debt, $22 million in cash, a modest burn rate, and we feel we can permit the project on our own.” Allen notes that mining giant Rio Tinto (RIO) holds an 18 percent stake in his company, and says he’s aware of another mine in Alaska that was able to complete the permitting process for roughly $15 million. Northern Dynasty, he implied, could manage that.

“We’ve used specialized rigs that could be helicoptered in,” Thiessen says. “There are no roads in this part of western Alaska, and we haven’t built any. And we have as many as 100, even 160 people working on the site. They all have to be heli’d in. That gets expensive fast.” He says it was worth it, though, to demonstrate the company’s commitment to low-impact mining. Its voluminous environmental baseline study, Thiessen went on to say, is the most comprehensive ever completed in Alaska, “and likely the world.”